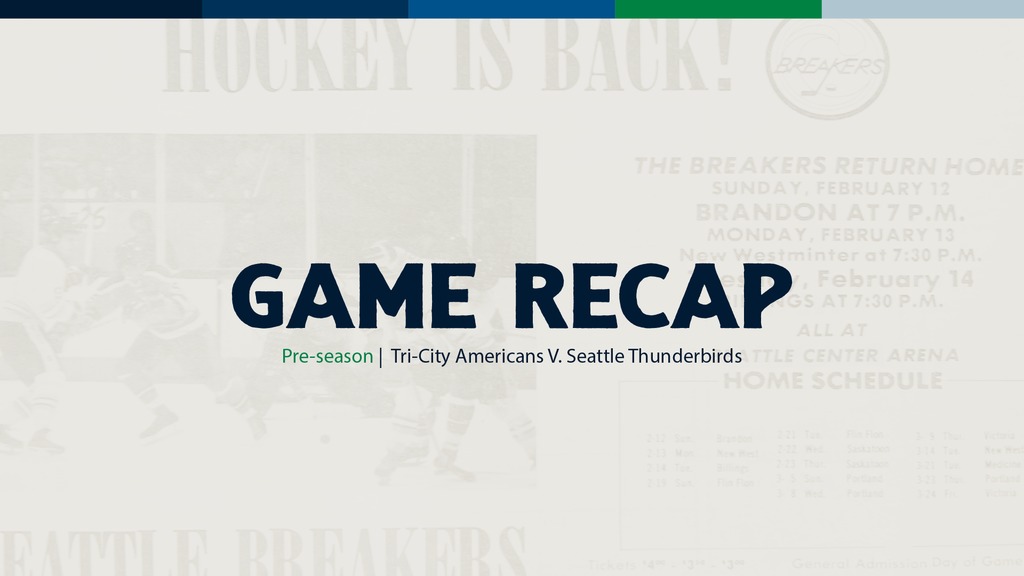 EVERETT, Wash. –Jordan Gustafson scored twice, including the winner in overtime, and the Seattle Thunderbirds defeated the Tri-City Americans, 5-4, in preseason action Sunday at Angel of the Winds Arena.  The T-Birds finish the weekend 3-0. The Thunderbirds return to action next Saturday with their fourth and final preseason game. They will face the Everett Silvertips at the Toyota Arena in Kennewick. Game time is 2:05 p.m.

Gustafson who did not play in the first two games on the weekend, was glad to get in the lineup and contribute. “It was nice to get into this last game and get my feet wet. It was actually only the second preseason game of my WHL career so far, so I was definitely pumped to get in and play.”

For the first time in the preseason, the T-birds fell behind as the Americans scored twice in the first period. The first goal came even strength, a tap in by Jake Sloan at 14:43 followed by a power play goal from Tyson Greenway two minutes later.

T-Birds head coach Matt O’Dette liked how his young lineup didn’t panic after falling behind. “The young guys played really well. It’s not easy to play three-in-three. Getting your first three games in the WHL like that can be a lot but those guys held their own.”

O’Dette said during the intermission the message was to stay with the good habits and stick to the systems. “If we continue with it, it will lead to opportunities, lead to some goals or some power play opportunities.”

The Thunderbirds cut into the Tri-City lead with a Hyde Davidson goal at 8:18 of the second period as he finished off a perfect centering feed from Brayden Dube. Gustafson had the second assist.  Davidson, a defenseman, says jumping up to join the rush is a part of his game. “I love jumping up on the play. I love touching the puck in the O-zone and creating chances like that.”

Seattle tied it up early in the third period as Coster Dunn knocked home a loose puck at 1:47. Ethan Mittelstaedt and Sam Oremba picked up the assists. But Seattle ran into penalty trouble and the Americans scored another power play goal, this time skating with a two-man advantage, to take a 3-2 lead.

The T-Birds shook it off and came right back and scored two quick goals to grab the lead. Gustafson tied it at 8:52 on an assist from Kaleb Hartmann. Oremba then put Seattle on top for the first time just over a minute later with Simon Lovsin and Bryce Pickford getting the helpers.

O’Dette says the two goals were a byproduct of putting together good shifts.

It took Tri-City just two minutes to get the game back to even on an Ethan Ernst goal at 12:05. With one second left in regulation play, the Americans took a delay of game penalty, giving Seattle a power play to start the overtime period. Gustafson one timed a pass from the left circle for the winner just 48-seconds into the extra frame.  Sawyer Mynio and Kyle Crnkovic had the assists.

Gustafson had been stopped by Tri-City goalie Eric Kahl moments earlier, so was happy to get a second chance to win it. “Almost identical plays. The first one, he totally robbed me. Crank (Crnkovic) is such a dynamic playmaker. I had a feeling he was going to come over to me again. He found a seam and I just happened to put it into the back of the net.”

Recently signed Spencer Michnik got the start in goal and made 26 saves to earn the win.

In their three wins on the weekend Seattle scored 15 goals and allowed just six.  The T-Birds also killed off 18 of 20 penalties while scoring five power play goals (5/12) and another two while shorthanded.  The Thunderbirds outshot their opponents 94-91.

A number of Seattle players will leave this week for NHL camps.