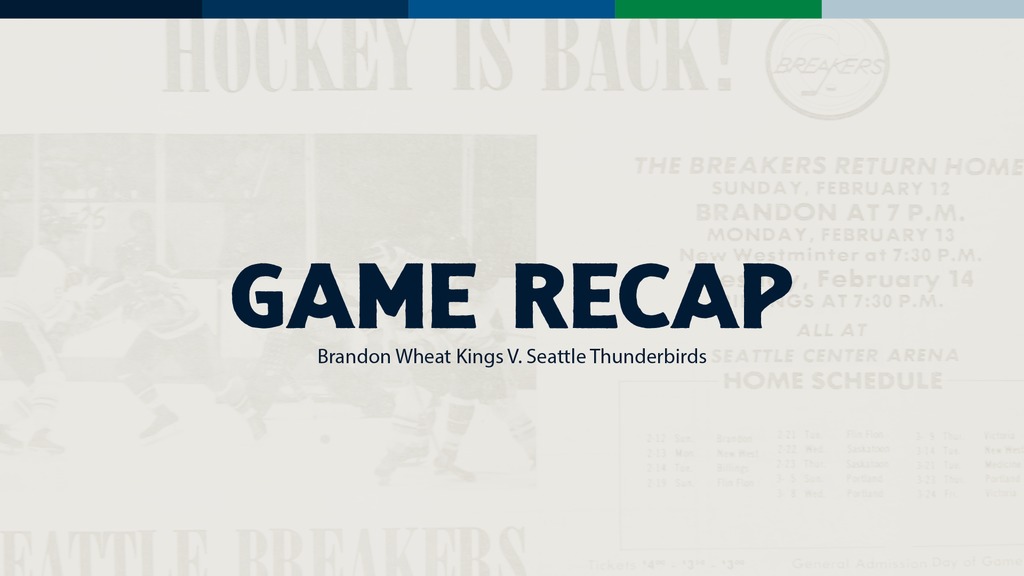 BRANDON, MB. –The Seattle Thunderbirds surrendered a goal late in the second period that broke a 1-1 tie and fell to the Brandon Wheat Kings, 4-2, Tuesday at Westoba Place. It was Seattle’s second straight loss, just the second this season they have dropped back-to-back games. The setback moves their record to 28-6-1-1. The Thunderbirds are right back at it Wednesday with a showdown against the Winnipeg ICE in Winnipeg. It’s a 5:05 p.m. start Seattle time.

Thunderbirds head coach Matt O’Dette said his team has hit a rough patch. “We’re not quite defending well enough,  kind of fighting a few things right now.”  He said they need to be better. “It’s pretty evident we’re not executing passes, pucks bobbling off our sticks. Things like that add up over the course of a game.”

Brandon scored the only goal of the first period, with Rylan Roersma getting to a rebound and scoring at 9:39.  It stayed that way until Jared Davidson snapped home his team leading 21st of the season to tie the game at 14:46 of period two.  The goal came as the Thunderbirds skated with a two-man advantage. Reid Schaefer had the lone assist.

But the tie was short lived as Seattle turned the puck over in their own zone in the final twenty seconds of the middle period, leading to the go-ahead goal from Brandon’s Calder Anderson with just 14 seconds remaining. Once again, the goal came off a goal mouth scramble.

“Turnovers lead to more time in our end, which is where we don’t want to be,” said O’Dette. “And we’re not defending quite well enough right now. We want to put pressure on them and make them defend in their end. That’s usually where we excel but we’re fighting it right now. We don’t quite have our feet under us.”

Seattle stayed in the game thanks to their killing off a Wheat Kings two-man advantage the first two minutes of the third period. The Thunderbirds finished the night a perfect 6-for-6 on the penalty kill, led by their goalie Scott Ratzlaff. “He gave us a chance to win,” commented O’Dette on his netminder. “We weren’t defending quite well enough tonight, which is usually our calling card. We’re usually pretty stingy, but we relied on Scott to bail us out more than we should have.”

O’Dette pulled Ratzlaff late for the extra skater, looking for a tying goal but Roersma hit the empty net at 18:55 to make it 3-1.  The Thunderbirds, showing no quit, pulled Ratzlaff again and Nolan Allan brought Seattle back to within a goal with 47 seconds on the clock. Kyle Crnkovic and Kevin Korchinski earned the assists. Brandon’s Nate Danielson would ice it though, with another empty net goal at 19:57.

“We haven’t faced a lot of adversity this year,” noted O’Dette. “We’re kind of in a little bit of if right now. We have a few things going on, guys under the weather, things like that. But there’s a big game tomorrow to get us back on track.”

Seattle remains on the road through the weekend. Their next home game is January 20th when they host the Lethbridge Hurricanes.

This is the first time in two months Seattle has suffered back-to-back losses. They dropped both ends of a home-and-home with Portland November 4th and 5th.

Korchinski’s third period assist was the 99th assist of his Thunderbirds career (114 games).

Monday, the NHL’s Winnipeg Jets assigned Brad Lambert, their 2022 first round pick, to Seattle.  The Thunderbirds acquired his rights this past summer from the Saskatoon Blades. Lambert is expected to make his Seattle debut Friday in Prince Albert.

The Thunderbirds made one deal at the WHL trade deadline on Tuesday, acquiring the rights to Dylan Guenther from the Edmonton Oil Kings. Guenther is currently playing in the NHL with the Arizona Coyotes and Arizona says the plan is to keep him there.