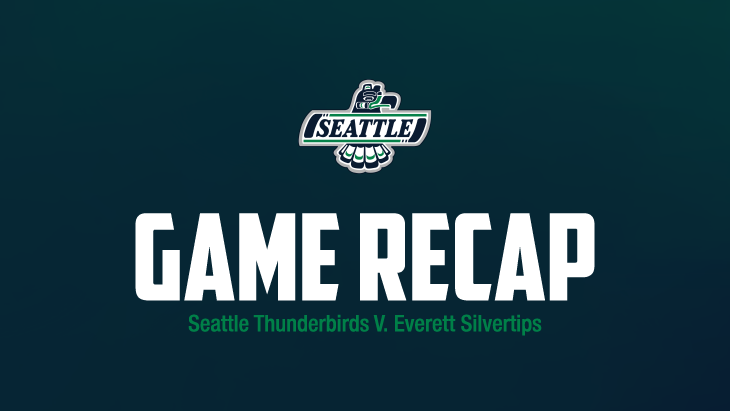 Everett, WA. – The Seattle Thunderbirds rallied from a three-goal deficit but came up a goal short, losing 3-2 to the Everett Silvertips Saturday at Angel of the Winds Arena. The loss snapped Seattle’s eight-game winning streak and dropped them out of a tie for first place in the U.S. Division. The Thunderbirds look to get back in the win column Friday, November 19th when they travel to Spokane to face the Spokane Chiefs.

The game was scoreless after one period, thanks in part to Thunderbirds goalie Thomas Milic who turned aside a dozen shots as Seattle was outshot in the opening frame, 12-3. Head coach Matt O’Dette said they needed a better start. “The second half of the game was better. It was not a good start for us.” He said against Everett, especially in their building, you have to be at your best with the puck. “We weren’t quite efficient enough and that led to not a lot of time in their end, where we could do our thing and generate opportunities.”

Everett (11-0-0-1) jumped out on top with three goals in the second period. The first goal came at 5:20 off the stick of Ryan Hofer. The Silvertips doubled their lead at the 12:06 mark when Austin Roest scored. Jackson Berezowski’s goal came just over two minutes later and would be all Everett would need.

The Silvertips were able to get to the front of the Seattle net on all three goals, something O’Dette says the T-Birds struggled with. “Line battles are important. Net front battles are important, and you gotta put the first shot on net for us to get second and third chances and we were reluctant to do that, passing up shots for an extra pass.”

The T-Birds (10-3-1-0) finally got on the board at 2:53 of the third period. Gabe Ludwig delivered a punishing hit along the boards deep in the Everett zone, freeing up the puck. Henrik Rybinski corralled the loose puck and fired home his fourth of the season, unassisted. With seven minutes remaining the Thunderbirds made it a one goal game thanks to a power play goal from Jared Davidson, assisted by Jordan Gustafson and Conner Roulette. Seattle pulled Milic with just over a minute remaining for the extra attacker but couldn’t find a tying goal, despite a mad scramble for a loose puck in the Silvertips crease with 35-seconds remaining.

O’Dette gave his team full credit for their push over the second half of the game, but he said they needed more of it from more players. “There were a lot of guys playing extremely hard. We had guys working their tails off, but in order to win a game like this you need every single guy. We were missing five or six guys in that department.”

The Thunderbirds next home game is Saturday, November 20th. They host the Kamloops Blazers at the accesso ShoWare Center. Game time is 6:05 p.m. Tickets are available online at seattlethunderbirds.com

With his third period goal, Rybinski extended his point streak to nine games. Over that span he has 13-points (4g, 9a). Reid Schaefer was held of the board and saw his point streak end at four games.

Thunderbirds center Matt Rempe returned to the lineup after serving a two-game suspension.