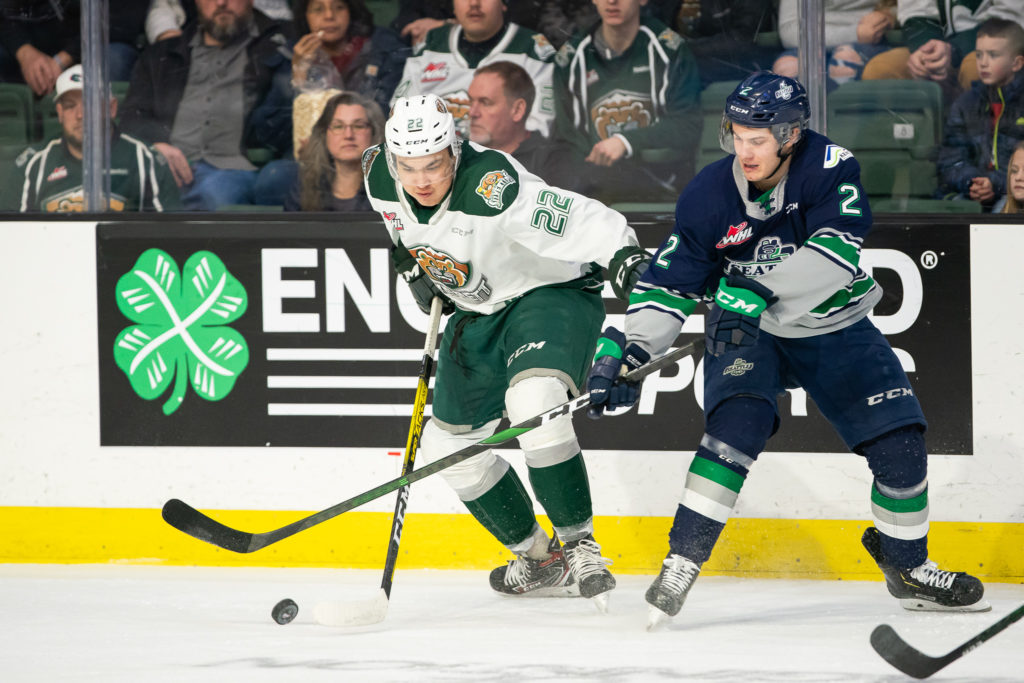 Kukuca has two goals in 5-2 win over Everett

EVERETT, March 7, 2020 — Andrej Kukuca had two goals Saturday night at Angel of the Winds Arena to lead the Seattle Thunderbirds to a 5-2 win over the Everett Silvertips.

The T-Birds magic number to clinch the second Wild Card playoff spot is six points. The T-Birds, at 55 points, are seven points ahead of the Prince George Cougars who have a 20-34-4-4 record (48 points) with six games remaining, meaning the Cougars can get at the most 60 points. Any combination of the T-Birds earning points and the Cougars losing points equaling six puts the T-Birds in the playoffs.

Conner Bruggen-Cate and Payton Mount each had a goal and an assist in the win.

Seattle goalie Roddy Ross had 32 saves and was strong in net as the T-Birds killed off seven Everett power plays.

Seattle answered back 1:07 after Everett’s goal when Andrej Kukuca put back a rebound. Bruggen-Cate carried the puck down the left wing and skated around an Everett defenseman. Bruggen-Cate got a shot off from in close on Everett goalie Dustin Wolf. Kukuca followed the play and popped the rebound over Wolf for his 25th goal of the season and 50th of his WHL career.

Bruggen-Cate put the T-Birds in front 2-1 on the power play just under two minutes after Kukuca’s goal. Mount passed the puck to Simon Kubicek at the mid-point. Kubicek took a slap shot with Bruggen-Cate in front of Wolf. Bruggen-Cate poked the rebound under Wolf for his 15th goal of the season.

Keltie Jeri-Leon gave the T-Birds a 3-1 lead at 11:55 of the second. Jared Davidson got a loose puck in the left corner and centered it to Jeri-Leon in the low slot. Jeri-Leon lifted a backhand shot past Wolf for his 22nd goal of the season. Lucas Ciona had the second assist.

Kukuca scored his second goal of the game on the power play at 14:31 of the third period. A shot from outside the offensive zone was sent at Everett’s net. Wolf got the puck with his stick but then misplayed it right to Kukuca in the right circle. Kukuca beat Wolf for his 26th goal.

After the goal Kukuca was called for an unsportsmanlike conduct penalty and Everett pulled Wolf for a six-on-four advantage. Mount corralled a loose puck in the left corner and sent it the length of the ice and hit the empty net at 15:26 of the third for his 14th goal of the season.

Everett got a second goal when Brendan Lee scored at 18:05 of the third.