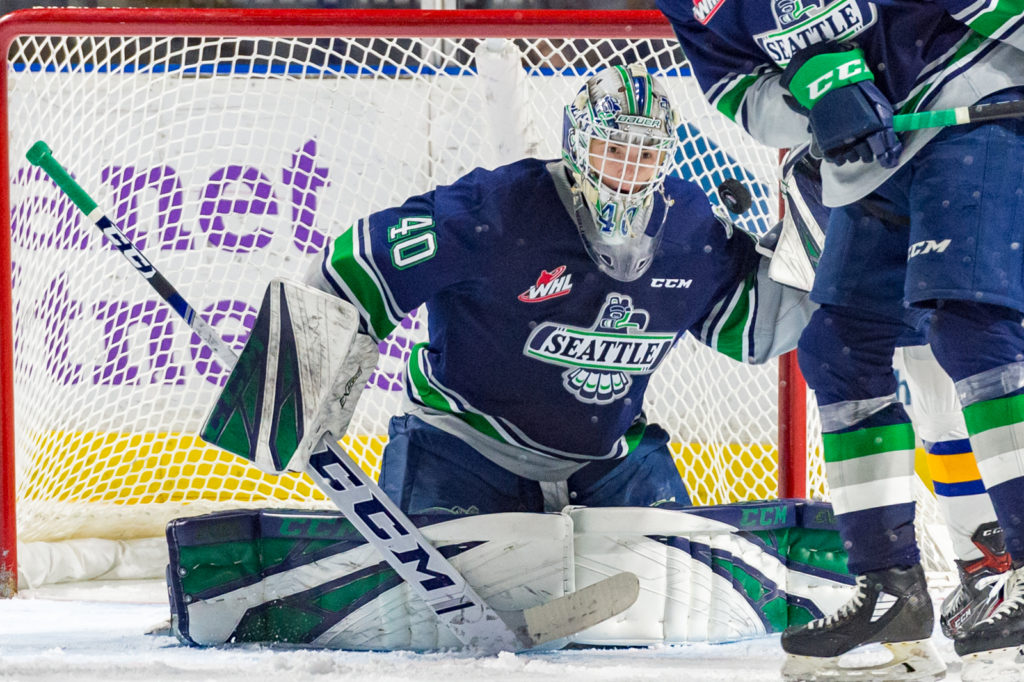 KENT, November 22, 2019 — Seattle Thunderbirds goalie Blake Lyda made 35 saves Saturday night in front a season high 6,143 fans at accesso ShoWare Center to lead the T-Birds to a 3-2 win over the Saskatoon Blades.

Lyda made nine saves in the first period, 11 saves in the second period and 15 saves in the third period. He was at his best in the last 1:41 of the game as the Blades pulled their goalie for an extra attacker down one goal. Lyda made several good saves and stopped the Blades final push with eight seconds left off a faceoff.

Congratulations to Blake Lyda on his first WHL win. pic.twitter.com/zwhcOM0GeP

Seattle took a 1-0 lead 25 seconds into the first period on Keltie Jeri-Leon’s team leading seventh goal of the season. Tyrel Bauer passed the puck up the ice to Matthew Wedman who gained the offensive zone. Wedman skated through the left circle and put a shot on goal. He got his own rebound at the goal line and centered the puck back through the crease past Saskatoon goalie Koen MacInnes. The puck went right to Jeri-Leon who had a wide open net to shoot into.

The T-Birds made it 2-0 at 16:13 of the first on a power-play goal by Simon Kubicek. Andrej Kukuca passed the puck from the left wall to Kubicek at center ice inside the blue line. Kubicek took a wrist shot with traffic in front of MacInnes. Kubicek’s shot hit the crossbar and went down into the net. Conner Bruggen-Cate had the second assist.

Saskatoon cut the T-Birds lead to one at 2:54 of the second period on a goal from Nolan Kneen.

Payton Mount answered back for the T-Birds at 8:01 of the second on the power play. Wedman controlled the puck along the right boards and then found Bruggen-Cate in front of MacInnes with a pass. Bruggen-Cate got off a shot that came off MacInnes’ left pad to Mount at the right of the goal. Mount buried the rebound as the goalie lunged to make the save.

The Blades cut the T-Birds lead back to one goal at 1:16 of the third period on a power-play goal by Matej Toman.