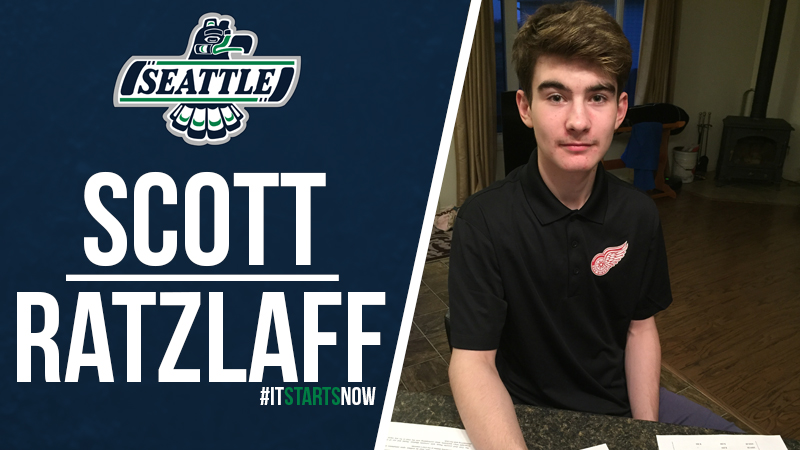 Goalie was selected in second round of 2020 Bantam Draft

Ratzlaff, from Irma, Alberta, was selected by the T-Birds in the second round, 43rd overall, in the 2020 Bantam Draft.

“The signing of Scott Ratzlaff ensures that we are set at the goaltending position for a long time,” said T-Birds director of player personnel Cal Filson. “Scott has everything that you look for in a goaltender. Size, mobility, vision and rebound control.”

Ratzlaff played for the Lloydminster Bobcats Bantam AAA team last year and had a record of nine wins, five losses and two shutouts with a goals against average of 2.41 and a save percentage of .899.

The T-Birds select goalie Scott Ratzlaff in the second round of the #WHLBantamDaft
👀 📊 👉 https://t.co/r8MD4AFPzm pic.twitter.com/mNXkoaA7EH

“Signing with the T-Birds was one of the easiest decisions I’ve had to make,” said Ratzlaff. “As soon as I saw my name come up on the T-Birds pick I was so excited and I knew I wanted to play there.”

“It has always been a dream of mine to play in the WHL and now that I have a chance I couldn’t say no. Seattle picking me in the second round was a huge part, as I felt they were very interested and I would have a good chance of playing. All of the staff that I have had a chance to talk with have been so welcoming,” continued Ratzlaff.

“I’d like to thank my parents for all the driving they have done and supported any decision that I have made. My sister for showing up to games and cheering me on. And my coaches that I have had for the past few years- Darryl, Cal, Kyle, Ambrose, and my goalie coach Gavin Armstrong and his brother Martin, and my advisor Chris Moulton.”

By signing a WHL Standard Player Agreement, Ratzlaff is guaranteed a WHL Scholarship for every year he plays in the WHL. A player is able to attend any career enhancing institution of his choice, including universities, colleges, technical institutes, trade schools, or any other institution which will help the player achieve his academic and career goals.