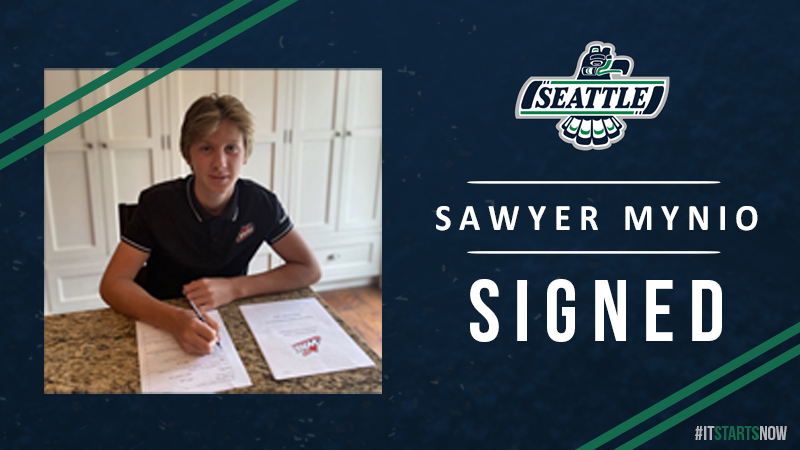 Defenseman was selected in third round of 2020 Bantam Draft

Mynio, from Kamloops, British Columbia, was selected by the T-Birds in the third round, 63rd overall, in the 2020 Bantam Draft.

“Sawyer is a smooth skating, puck moving defenseman who has the potential of being a quality player for us in the future,” said T-Birds senior scout Jag Bal. “He sees the ice well and plays with skill and has a high compete level.  Sawyer has all the attributes that we look for when drafting a player and he is an exciting addition to the T-Birds.”

Mynio played for the Yale Hockey Academy Bantam Prep team last season. He had four goals and 19 assists for 23 points in 23 games.

“I am super excited to join such a great organization,” said Mynio. “They have a great coaching staff and I have heard nothing but great things about the team.”

“It means a lot to me to be able to play in the WHL. This is something I have dreamed about and today is a special day. My parents and all the coaches I have had along the way all deserve a lot of credit for getting me to this point.”

By signing a WHL Standard Player Agreement, Mynio is guaranteed a WHL Scholarship for every year he plays in the WHL. A player is able to attend any career enhancing institution of his choice, including universities, colleges, technical institutes, trade schools, or any other institution which will help the player achieve his academic and career goals.