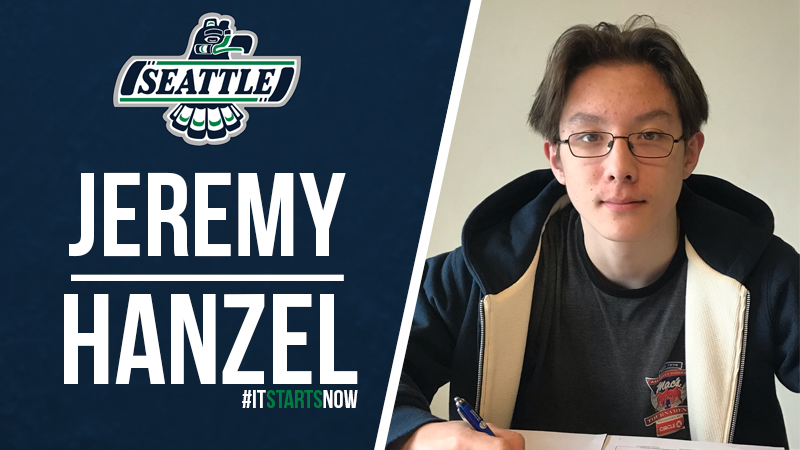 Hanzel, from Coquitlam, British Columbia, is a 2003 born player who was added to the team’s protected list on October 14.

“Jeremy is an intelligent, puck moving defenseman who excels on the power play,” said La Forge. “He will be a great compliment to our current defensive core as well as to Kevin Korchinski and Spencer Penner.”

“Jeremy choosing to develop in the WHL is a big win for us and great work by our entire scouting staff to identify a player who will contribute for us when Thunderbirds hockey resumes.”

This season Hanzel played 38 games with the Vancouver NE Chiefs in the BCMML and had four goals and 30 assists for 34 points.

“I have heard lots of great things about Seattle,” said Hanzel. “I came down for a practice and game in November and the atmosphere was amazing. The coaches were great and the arena and fans were awesome.”

“I feel I am an offensive defenseman that sees the ice well. I want to get bigger, stronger and quicker to get ready for next season. Thank you to my parents and all my past coaches who have helped get me to this point.”

By signing a WHL Standard Player Agreement, Hanzel is guaranteed a WHL Scholarship for every year he plays in the WHL. A player is able to attend any career enhancing institution of his choice, including universities, colleges, technical institutes, trade schools, or any other institution which will help the player achieve his academic and career goals.

Eight is Enough for T-birds
4 mins ago