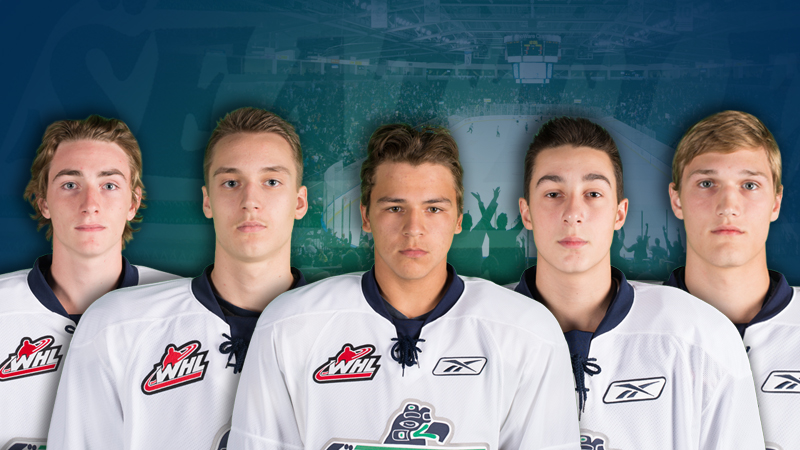 All five players are eligible to play in the T-Birds first preseason game on Friday against the Tri-City Americans at the Everett Silvertips Holiday Inn Preseason Classic at Comcast Arena. Game time is 11:30am.

Bear, from Hodgson, Manitoba, was the T-Birds’ fifth round selection, 102nd overall, in the 2014 Bantam Draft. Last season he played 33 games with the Interlake Lightning in the Winnipeg Bantam Division 1 and had 18 goals and 33 assists for 51 points.

“Wyatt had a very good camp and has huge potential to be an impact player in the WHL. His skill set combined with a big physical frame gives him a great platform to develop into a very good player,” said Farwell.

Harsch, from Grand Prairie, Alberta, was the T-Birds’ eighth round selection, 170th overall, in the 2014 Bantam Draft. Last season he played 33 games with Grand Prairie in the AMBHL and had two goals and 12 assists for 14 points.

“Reece might have been our most pleasant surprise at camp this year.  He played with poise and real good common sense and we are excited about his potential to be a very good defenseman for us in the future,” said Farwell.

Holowko, from Burnaby, British Columbia, was an invite to T-Birds Training Camp prior to the 2012-13 season. He was added to the team’s 50-player protected list after that Training Camp. Last season he played 33 games with North Delta in the PaJHL and had two goals and nine assists for 11 points.

“Nick has been a very loyal and committed player for us since we listed him two years ago. He has never varied in his desire to play for the Thunderbirds and with his hard work this summer has shown he is now ready to challenge for a job,” said Farwell.

“Luke has made an impressive conversion from defense to forward since coming to training camp last year. He is a driven and focused player who brings a real physical style to every shift he plays. He has earned his spot and will add grit to our team for years to come,” said Farwell.

Wight, from Burnaby, was the T-Birds’ seventh round selection, 148th overall, in the 2014 Bantam Draft. Last season he played for the Burnaby Winter Club in the PCAHA.

“Mackenzie had a very good camp and has proven to be a very good prospect to play in the WHL in the future. He plays a physical, agitating style and can add offense as well. We are excited to bring him on board as a Thunderbird for the future,” said Farwell.

The T-Birds next preseason appearance will be in Kennewick at the Red Lion Hotels’ Preseason Tournament at the Toyota Center. The T-Birds will play the Spokane Chiefs on Thursday, September 4, at 3:00 p.m. and face the Everett Silvertips on Friday, September 5, at 11:00 a.m.

The T-Birds home opener for the 2014-15 regular season is Saturday, September 20 against the Everett Silvertips at ShoWare Center at 7:05pm.

T-Birds Take Down Chiefs
5 days ago