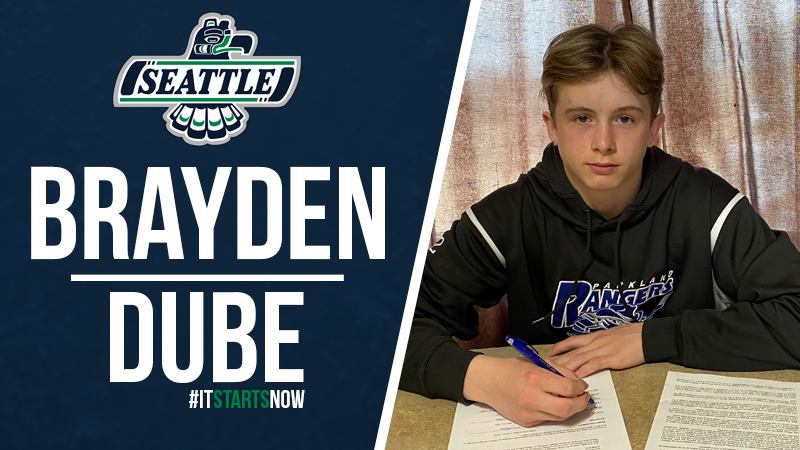 Right wing was selected in second round of 2020 Bantam Draft

Dube, from Roblin, Manitoba, was selected by the T-Birds in the second round, 29th overall, in the 2020 Bantam Draft.

“Brayden plays at a high compete level that generates offense with skill and determination. He’s gritty, unselfish and always seems to be around the puck,” said T-Birds director of scouting Mark Romas.

“Brayden is the type of player we appreciate and expect to be a great fit for our team.”

Dube played for the Parkland Rangers Bantam AAA team last year and had 74 goals and 56 assists for 130 points in 36 games.

The T-Birds select right wing Brayden Dube in the second round of the #WHLBantamDraft.
👀 📊 👉 https://t.co/63ueVQRbsg pic.twitter.com/4jiq7LFoL1

“I am really excited to go join a great, young team,” said Dube. “I feel I am a speedy, offensive forward that can score and sees the ice well. It will be exciting to be at Training Camp in the fall, meet the guys and see the facilities.”

“My parents have driven me and pushed me to become a better player and I appreciate all that they have done,” continued Dube.

By signing a WHL Standard Player Agreement, Dube is guaranteed a WHL Scholarship for every year he plays in the WHL. A player is able to attend any career enhancing institution of his choice, including universities, colleges, technical institutes, trade schools, or any other institution which will help the player achieve his academic and career goals.