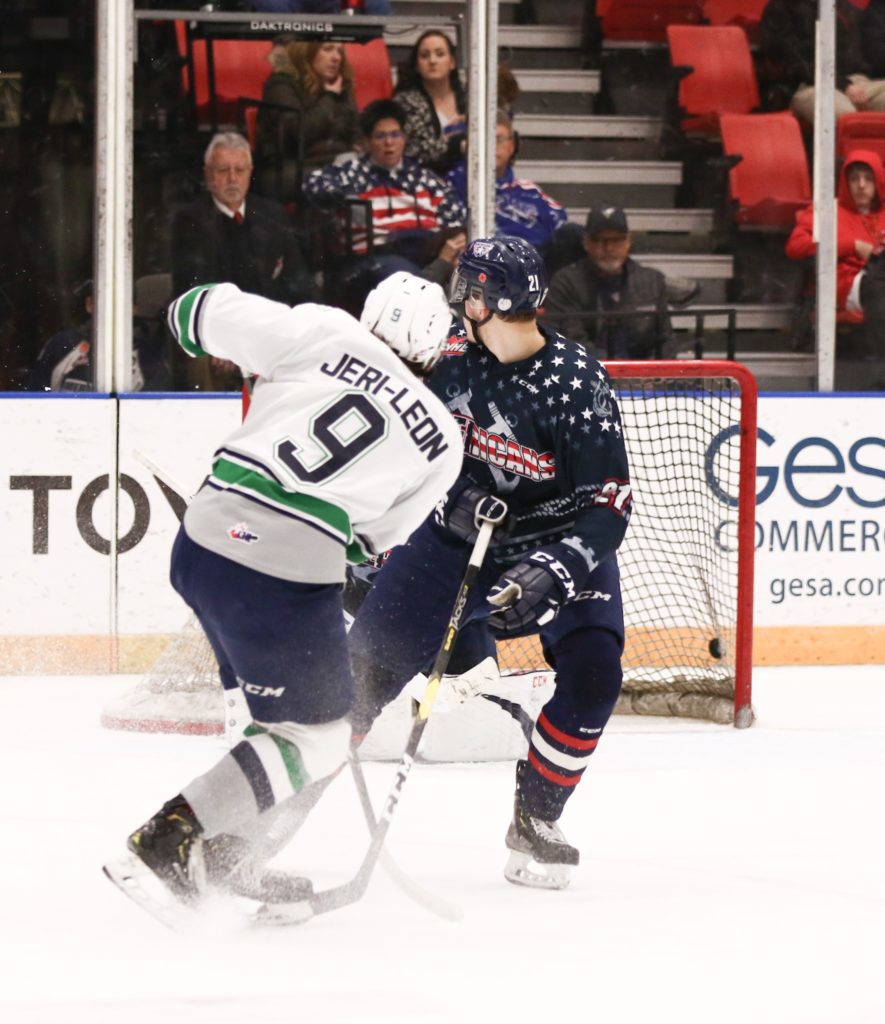 KENNEWICK, January 10, 2020 — Jared Davidson and Conner Bruggen-Cate each had two goals Friday night at the Toyota Center to lead the Seattle Thunderbirds to an 8-5 win over the Tri-City Americans.

Bruggen-Cate extended his point streak to a team high seven games with his two goals. He now has six goals and seven assists in the last seven games.

Andrej Kukuca had a goal and two assists and extends his point streak to five games. He has five goals and five assists in the last five games.

This was the first multi-goal game of Davidson’s career.

Seattle scored two goals in 2:33 and then scored two more goals in 3:14 to take a 4-0 lead to the first intermission.

Lucas Ciona’s forecheck forced a turnover behind the Tri-City net. Davidson got the loose puck and came out from below the goal line at the right post. Davidson’s first shot was stopped by Talyn Boyko but Davidson jammed the rebound past the goalie at the seven-minute mark.

The goal was Sanders first in the WHL.

At 16:23 of the first Davidson struck for a second goal to make it 3-0 T-Birds. Sanders passed the puck from the left wall in the Seattle zone up the ice to Uchacz who gained the offensive zone on the left wing and dropped the puck to a trailing Davidson. Davidson cut into the right circle and beat Boyko for with a wrist shot for his fifth goal of the season.

Skating four-on-four Keltie Jeri-Leon made it 4-0 Seattle at 19:37 of the first. Andrej Kukuca had the puck in the right circle of the defensive zone and made a diagonal pass up ice to Jeri-Leon on the left wing. Jeri-Leon skated into the left circle and beat Boyko over the glove for his 16th goal of the season.

Marc Lajoie scored at 2:50 of the second period to get the Americans on the board.

Seattle took the four-goal lead back at 8:46 of the second period. Tyrel Bauer took wrist shot from the right point with Conner Roulette in the slot. Roulette caught Bauer’s shot with his stick, spun and fired the puck at the Tri-City net. Dunsford went down to stop Bauer’s shot and then lunged to his right to try and make the save on Roulette. The goal was Roulette’s 13th of the season and his third consecutive game with a goal.

The Americans got their second goal when Connor Bouchard scored at 9:49 of the second on the power play.

Bruggen-Skate scored two goals 5:01 apart late in the second to give the T-Birds a 7-2 lead heading into the second intermission.

Kukuca scored unassisted on a breakaway at 3:48 of the third period to make it an 8-2 lead. Kukuca blocked a shot and then chased down the puck on the left wing. He came in on Dunsford going left to right and beat the goalie over the glove for his 16th goal of the season.

Blake Stevenson scored at 4:14 of the third to get the Americans third goal.