T-Birds Shoot Down Rockets In Game 3 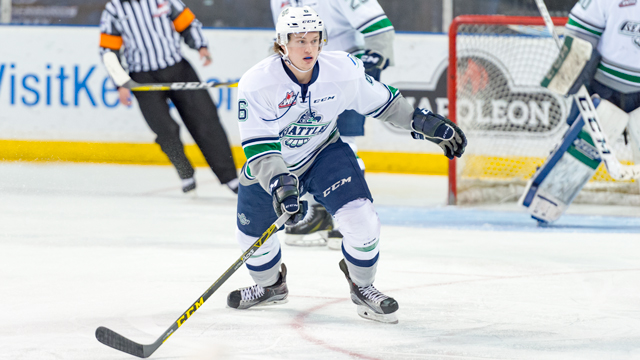 KENT, April 26, 2016 — Landon Bow made 36 saves Tuesday night at ShoWare Center in front of 5,878 raucous fans to lead the Seattle Thunderbirds to a 3-1 win over the Kelowna Rockets in Game 3 of the Western Conference Championship.

The T-Birds lead the best-of-seven series 3-0 and can clinch the Western Conference title Wednesday night at ShoWare Center in Game 4. The puck drops for Game 4 at 7:05pm.

Bow made 10 saves in both the first and second period and 17 saves in the third period to get his 11th win of the playoffs.

Seattle took a 1-0 lead on a power-play goal from Bryan Allbee at 14:51 of the first period. Nolan Volcan won a puck battle on the right boards back to Jerret Smith at the right point. Smith crossed the puck to Allbee at center ice. Allbee beat Kelowna goalie Michael Herringer with a slap shot over the glove.

Kelowna tied the game 1-1 at 13:17 of the second period on a goal from Justin Kirkland. Tyson Baillie and Cal Foote had the assists.

The T-Birds took a 2-1 lead 58 seconds into the third period on a goal from Ethan bear. Keegan Kolesar worked the puck out of the left corner to Mathew Barzal along the left boards. Barzal crossed the puck to Bear pinching down into the right circle. Bear snapped a wrist shot past Herringer low on the glove side for the go-ahead goal.

The Rockets picked up the intensity after the T-Birds took the lead. They started firing shots at Bow from all angles.

The T-Birds were called for delay of game with 2:08 left in the third period. The Rockets pulled Herringer for a six-on-four advantage. Bow made a very nice blocker save on Rourke Chartier sliding right to left to stop a scoring opportunity from the right circle. 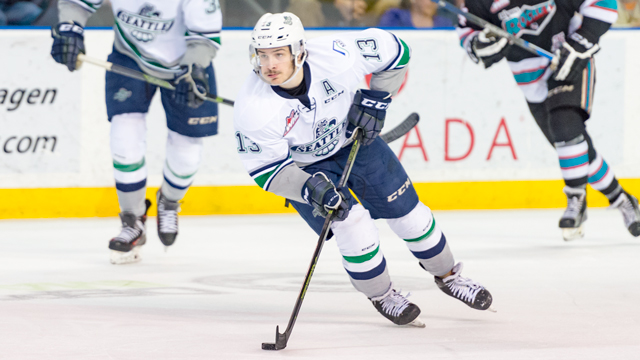 Off the ensuing faceoff from Chartier’s shot going out of play, the Rockets won the puck back to their defense from the right circle. Barzal pressured the defense as he lost the faceoff and the Rockets defense mishandled the puck. Barzal got the puck in neutral zone and sped up ice with two Rockets defenders chasing him. Barzal hit the empty net to seal the win.

Herringer stopped 30 of 32 shots in the loss.