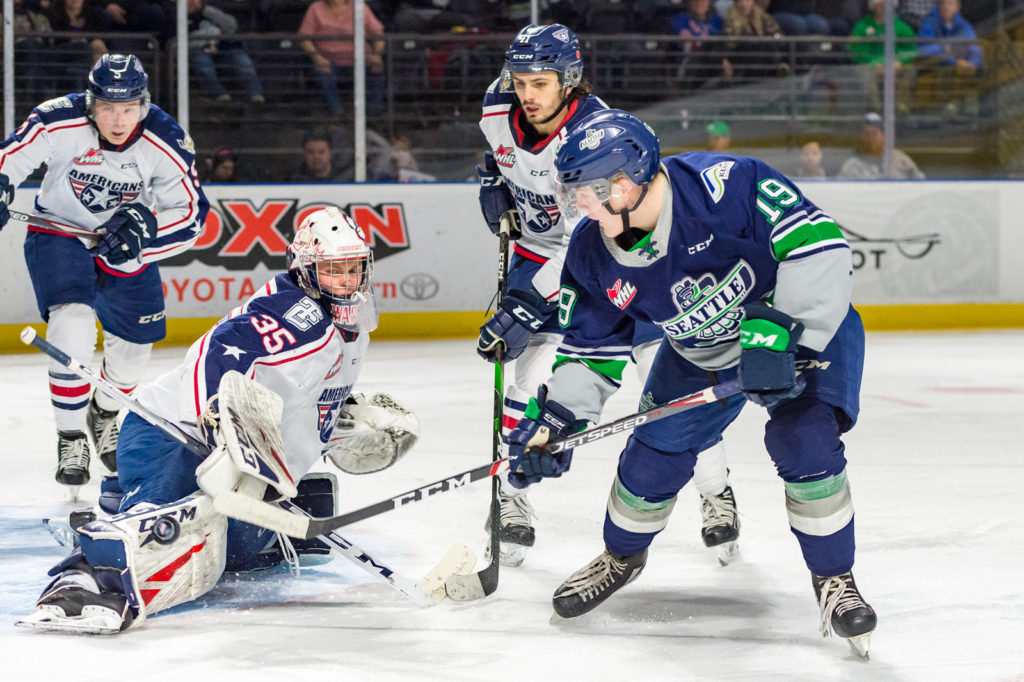 Payton Mount had two goals, Zach Ashton had three assists, and Conner Roulette had two assists as the T-Birds put a season high 57 shots on goal. Seattle had 20 shots in the first period, 14 shots in the second period and 23 shots in the third period.

On Sunday they travel to Portland face the Winterhawks at 5pm. This game will broadcast locally on JOEtv Channel 22/Cable 110.

Jordan Gustafson and Spencer Penner made their T-Birds debuts in the game.

Gustafson was selected in first round, eighth overall, in the 2019 Bantam Draft. Gustafson signed a WHL Standard Player Agreement with the team on May 22, 2019. He was called up from the Fort Saskatchewan in the AMHL and has seven goals and 12 assist for 19 points in 18 games.

Penner was selected by the team in the second round, 29th overall, in the 2019 Bantam Draft. Penner signed a WHL Standard Player Agreement with the team on May 29, 2019. He is currently playing with the Eastman Selects in the MMHL and has one goal and eight assists for nine points in 19 games.

Spencer Penner and Jordan Gustafson hit the @ShoWareCenter ice first tonight. They are making their T-Birds debuts tonight and get a few laps to themselves. #ItStartsNow #LetsGoBirds pic.twitter.com/sIyqtHqEAh

Seattle took a 1-0 lead at 6:04 of the first period on Matthew Rempe’s fourth goal of the season. Roulette chipped the puck off the right wall to Keltie Jeri-Leon on the right wing in the neutral zone. Jeri-Leon centered the puck to Rempe coming off the bench to put him on a breakaway. Rempe came down on Tri-City goalie Beck Warm and went to his left to try and lift a backhand shot past the goalie. Warm made the save but slid past the post as the puck lay in the crease. Rempe from behind the net used his long reach to poke the puck into the net for his fourth goal of the season.

Mount put the T-Birds in front 2-0 at 11:24 of the second period. Max Patterson took the puck hard to the net from the left wing. Patterson’s shot rebounded to Ashton at the right point. Ashton took a wrist shot with Patterson screening the goalie that came into the slot. Mount, skating right to left, corralled the loose puck, waited out Warm, and beat the goalie by roofing a backhand shot for his seventh goal of the season.

Seattle kept the pressure on and made it 3-0 at 16:09 of the second. Conner Bruggen-Cate passed the puck from the right corner to Tyrel Bauer at the right point. Bauer put a wrist shot on goal with traffic in front of Warm that beat the goalie low on the blocker side. Andrej Kukuca had the second assist.

Henrik Rybinski made it a 4-0 lead at 17:20 of the second by crashing the net and knocking in a pass from Roulette. Roulette gave the puck to Rybinski coming into the zone and Rybinski gave it right back and headed to the net to get his fifth goal of the season. Ashton had the second assist.

Tri-City got on the board at 18:42 of the second on a power-play goal by Sasha Mutala.

Mount scored his second of the game at 8:02 of the to make it a 5-1 lead. Ashton passed the puck up the right wing to Mount who carried it into the offensive zone. Mount wired a wrist shot over Warm’s blocker from the right circle for the goal.

Seattle goalie Roddy Ross made 21 saves to get the win.