T-Birds Select Samuel Knazko In First Round of Import Draft 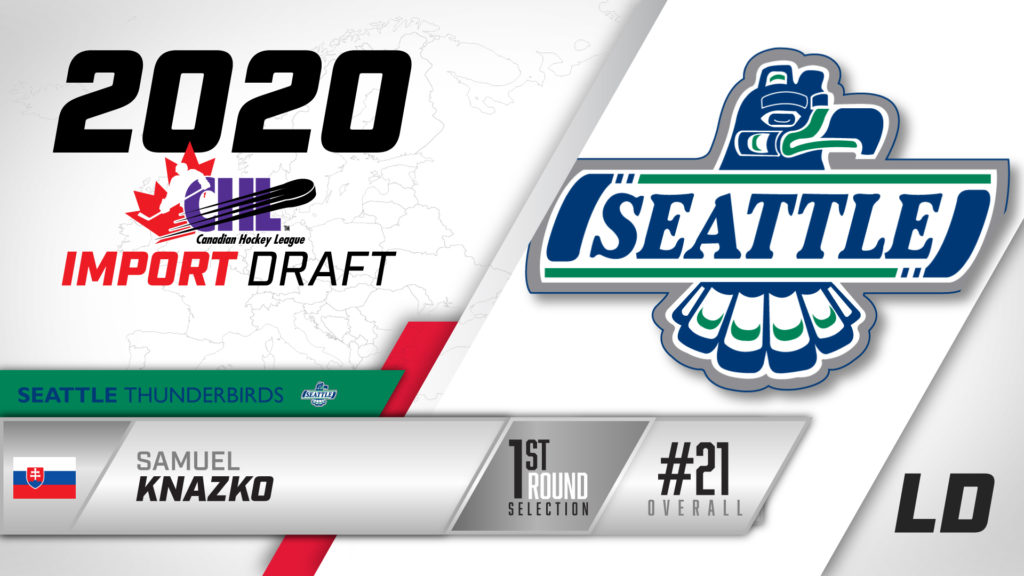 Knazko, a defenseman from Slovakia, taken with 21st overall selection in Import Draft

KENT, June 30, 2020 — The Seattle Thunderbirds selected defenseman Samuel Knazko from Slovakia in the first round, 21st overall, of the 2020 CHL Import Draft this morning.

Knazko played last season for TPS Turku in the Finnish Junior League. He had seven goals and 21 assist for 28 points in 41 games. Knazko represented Slovakia at the 2020 World Junior Championship, playing in five games and registering an assist.

“We think Samuel is a high end defenseman that fits well with our group,” said general manager Bil La Forge. “He has offensive upside and instincts we really appreciate.”

Knazko is ranked number 42 in the NHL Central Scouting Final Rankings of European skaters for the 2020 NHL Draft.

Knazko represented Slovakia at the World Junior Championship. He played in five games and had one assist. pic.twitter.com/kwpfqKnlL4

Last season the T-Birds two Import players were right wing Andrej Kukuca from Slovakia and defenseman Simon Kubicek from the Czech Republic. Both Kukuca and Kubicek were selected in the 2018 Import Draft.

Kukuca led the team in scoring last season with 26 goals and 31 assists for 57 points and has graduated from the league. Kubicek was the highest scoring defenseman on the team last season with seven goals and 20 assists for 27 points in 52 games. Kubicek is ranked number 136 in the NHL Central Scouting Final Rankings for 2020 NHL Draft eligible players.

The T-Birds also had the 81st overall selection in the 2020 Import Draft but did not use it with Kubicek returning.

The two-round draft took place online with the order of selection rotating through each of the CHL’s three leagues using an inverse order of final regular season standings within each league from the 2019-20 season.

The WHL has announced a Return to Play Protocol for the 2020-21 season with an anticipated start date of Friday, October 2. Further information is available here.