T-Birds Select Payton Mount In First Round of Bantam Draft 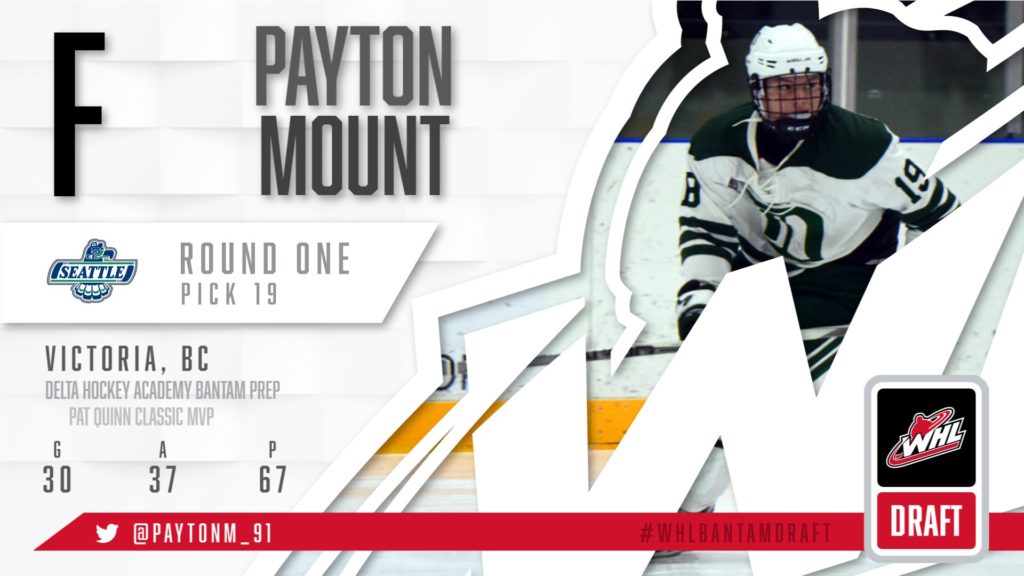 KENT, May 4, 2016 — The Seattle Thunderbirds selected right wing Payton Mount in the first round, 19th overall, in the 2017 Bantam Draft Thursday morning in Calgary, Alberta.

T-Birds Director of Player Personnel Cal Filson commented on the pick of Mount from the draft. “Payton Mount is as a pure goal scorer as there is in this draft. He is a very intelligent player who is very good in all zones on the ice.”

Mount played this season with the Delta Hockey Academy Bantam Prep team and had 30 goals and 37 assists for 67 points in 30 games. Mount, who is 5’8 and 169 pounds, is a right hand shot from Victoria, British Columbia.

In the second round, with the 41st overall pick, the T-Birds selected defenseman Tyrel Bauer from the Airdrie Extreme Bantam AAA team.

“Tyrel is the captain of his team and real leader. He is a big, strong, physical defenseman,” said Filson.

The T-Birds selected defenseman Luke Bateman in the fourth round, 85th overall, at the Draft. Bateman, from Kamloops, British Columbia, played for the Thompson Zone 1 Bantam T1 team last season. Batman is 6’2 and 177 pounds.

“Luke is a big, physical defenseman who really came on in the second half of the year,” said Filson. “He has a ton of upside and growth in his game and he is a real presence on the ice.”

The T-Birds next two selections in the Bantam Draft both played on the same team this past season, the Camrose Red Wings Bantam AAA team.

In the seventh round with the 139th selection the T-Birds took right wing Greg Nelson.

“Greg is a quick skater and a smart two-way player. He can play center or on the wing,” said Filson.

Nelson played in 33 games with the Red Wings and had 23 goals and 32 assists for 55 points.

Seattle selected goalie Ty Marcinkowski in the eighth round, 173rd overall, at the Bantam Draft.

“Ty works with Ian Gordon. He is a diligent worker with quick feet and good mobility,” said Filson. “He has an excellent work ethic.” Gordon is the T-Birds goaltender coach.

Marcinkowski played 21 games for the Red Wings team this season and had a 2.78 goals against average and a .922 save percentage with a 12-6-0 record.

The T-Birds selected forward Cameron Berg from White Bear Lake, Minnesota, in the ninth round with the 195th overall selection.

“Cameron is a two-way forward that competes like an animal,” said Filson. “He thinks the game very well and makes his line mates better.”

Seattle selected left wing Josh Paulhus in the 10th round with the 200th overall selection.

“Josh has improved all year,” said Filson. “He plays with speed and is a decisive puck mover who is really good in both ends of the rink.”

Paulhus is 5’8 and 159 pounds. He played 29 games with the Saskatoon Generals Bantam AA team this season and had 35 goals and 25 assists for 60 points with 80 penalty minutes.

The T-Birds had a second pick in the 10th round, 217th overall, and used it to take defenseman Ian Kern from the Vancouver Thunderbirds Bantam A1 team.

“Ian is a smart, hard-working player that keeps it simple,” said Filson. “He can chip in offensively.”

The Bantam Draft allows for the orderly transfer of players to WHL Protected Player Lists (PPL) from the bantam ranks (14-15 year-old players).

Players from non-North American countries are allowed to be added to rosters via the CHL Import Draft held in June.

The T-Birds play the Regina Pats in the WHL Championship starting Friday, May 5, at the Brandt Centre. Game 1 puck drop is at 6pm. Game 2 is Saturday, May 6, at 6pm in Regina.

The T-Birds will host Games 3, 4 and 5 of the WHL Championship.

Game 3 is Tuesday, May 9, at 7:05pm at ShoWare Center. Game 3 will be a Directors Mortgage 2-for-Tuesday game that will feature two-for-one tickets in all price levels and $2 concession specials on hot dogs, popcorn and soda and two-for-one beer purchases.

Game 4 of the WHL Championship will be a White Out Wednesday game on May 10. Wear your favorite white T-Birds jersey or t-shirt. The puck drops at 7:05pm at ShoWare Center for Game 4.