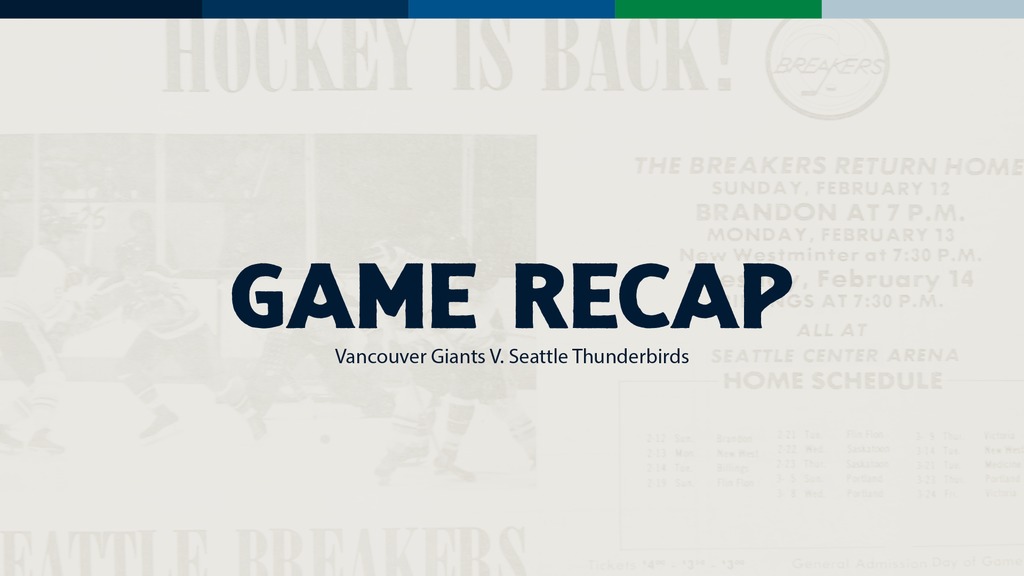 KENT, Wash. – The Seattle Thunderbirds built a four-goal lead then hung on for a 6-4 win over the Vancouver Giants Saturday at the accesso ShoWare Center. The game was Seattle’s 2022-23 home opener. Prior to the game they raised their 2022 WHL Western Conference Championship banner, earned in last season’s playoffs. The T-Birds are off until next weekend when they play a pair of road games in British Columbia.

Seattle (2-0-0-0) came out flying to start the game and scored twice in the first ninety seconds.  Kyle Crnkovic opened the scoring just 46-seconds in. Rookie defenseman Hyde Davidson picked up his first WHL point with an assist on the opening goal. That was followed 38-seconds later when Gabe Ludwig knocked home his first goal since last January.

“Some great parts of the game,” commented head coach Matt O’Dette. “But we definitely faded as the game went on.”

Vancouver (1-2-0-1) cut the Thunderbirds lead in half with an unassisted 4-on-4 goal from San Honzek just past the midway point of period one.  Seattle responded when Lucas Ciona tapped home a cross crease pass from Jordan Gustafson a little over four minutes later.

The Thunderbirds were able to extend the lead with a pair of goals about six minutes apart in period two.  Jared Davidson gave Seattle a 4-1 advantage at 6:44. Davidson, who didn’t get his first goal last season until game ten but ended up with 42, was glad to get the first one this season early.

“Last season I didn’t have that success right away. Getting the first one off my back is kinda huge and keeps the weight off my shoulders.”

Reid Schaefer gave the T-Birds their biggest lead of the night at 5-1 when he potted his first at 12:07. The Giants got within 5-2 when Ty Thorpe scored the first of his two on the night at 14:33.

Seattle still had a three-goal lead when the third period began but Vancouver got a power play goal from Thorpe at 3:36 and an even strength goal from Colton Roberts at 6:49, making it a one-goal game.

“We didn’t have a great third period, said O’Dette. “It’s early. We’re just getting our group back together.” The T-birds just had five players return this week from NHL training camps. O’Dette did say they need to re-establish playing with the lead and closing out an opponent. “Learning how to win, working on some of our habits and being better next time.”

The Thunderbirds were able to stop the bleeding and Crnkovic’s empty net goal with 32-seconds left iced the win.

The Thunderbirds next home game is Tuesday, October 11th at 7:05 p.m. when they host the Medicine Hat Tigers.

All but one Thunderbird player has returned from NHL training camp.  Defenseman Kevin Korchinski remains with the Chicago Blackhawks, who drafted Korchinski in the first round of this summer’s NHL Entry Draft.  Mekai Sanders is still sidelined while he rehabs from a lower body injury suffered late last season.

Seattle has scored nine goals through two games. Eight different players have scored. Thirteen Seattle players had at least a point in the home win.

Seattle is 0-for-5 through two games with the power play but O’Dette said that is a byproduct of having guys away at NHL camps. “We’re just getting our guys back. Just like lines need time to get chemistry, so do power play units. I’m not worried about that at all.”