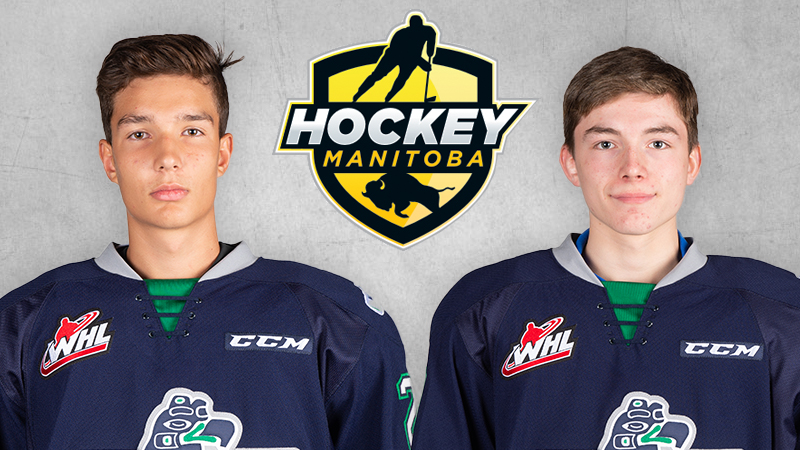 Brook and Roulette were selected in the 2018 Bantam Draft

Roulette, from Winnipeg, Manitoba, was selected by the T-Birds in the second round, 34th overall, at the 2018 Bantam Draft in Red Deer, Alberta on May 3. Roulette signed a WHL Standard Player Agreement with the team on June 5, 2018.

“Conner is having a very good season with the Thrashers,” said La Forge. “He is very deserving of being selected and we look forward to watching him represent his home province.”

This season Roulette is playing for the Winnipeg Thrashers Midget AAA team in the MMHL. He has played 27 games and leads his team in scoring with 20 goals and 33 assists for 53 points.

In his bantam season Roulette played 34 games with the Winnipeg Hawks Bantam AAA team and had 52 goals and 49 assists for 101 points.

Brook, from Roblin, Manitoba, was selected by the T-Birds in the fourth round, 76th overall, in the 2018 Bantam Draft.

“We think Aidan is going to do very well at the Games,” said La Forge. “We are excited to watch him play against the top forwards in his age group from across Canada.”

This season Brook is playing for the Rink Hockey Academy Elite 15 team in the CSSHL. He has played 25 games and has one goal and 19 assists for 20 points with  30 penalty minutes.

In his bantam season Brook played for the Parkland Rangers Bantam AAA team. He appeared in 36 games and had three goals and 18 assists for 21 points with 62 penalty minutes.