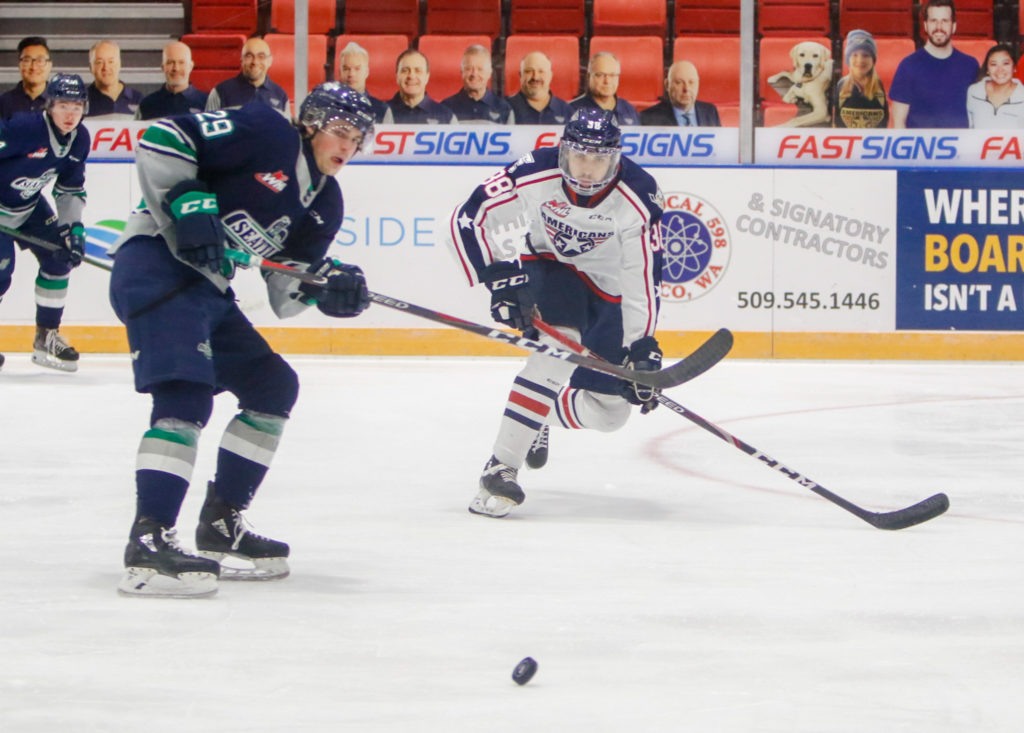 This was the first of back-to-back games between the two teams. The second game is Tuesday at the accesso ShoWare Center at 6:05pm.

Seattle (6-5-0-0) took a 1-0 lead at 2:30 of the first period on a power-play goal by Jared Davidson. Payton Mount took a wrist shot from the right circle that Tri-City goalie Talyn Boyko stopped. The rebound went to Henrik Rybinski who got a shot off before Davidson banged into the net at the right post for his third goal of the season.

Jared Davidson gets his third of the season to put us up 1-0!
🍎 Rybinski
🍏 Mount pic.twitter.com/vuTLHyngoj

The Americans went in front 2-1 on a goal from Mitchell Brown at 18:54 of the first.

Henrik Rybinski tied the game 2-2 while being cross checked down at 4:21 of the second period. Davidson won a faceoff in the left circle back to Jeremy Hanzel at the left point. Rybinski was on the right wing and on the faceoff win moved to the left of the net with his back towards Boyko. Rybinski took a Hanzel pass on his forehand with his back to the slot. Rybinski turned towards Boyko with the puck and put it over the goalie’s left shoulder as he was being cross checked to the ice.

Seattle took a 3-2 lead on the power play at 5:33 of the second. Jordan Gustafson tied up a face off in the left circle and Keltie Jeri-Leon got the loose puck. Jeri-Leon went back and forth with the puck to Kevin Korchinski at the left point. Korchinski crossed the puck to Gustafson in the right circle. Gustafson beat Boyko over the glove with a hard snapshot for his fourth goal of the season.

We tied it on the power play.

Jordan Gustafson snapped it glove side for his fourth of the season.#LetsGoBirds pic.twitter.com/1gTSotLhAI

The Americans pulled Boyko for an extra attacker with 1:25 left in the game. The T-Birds kept the Americans at bay, including a save by Milic with 2.4 seconds left on a scramble in front of his net.