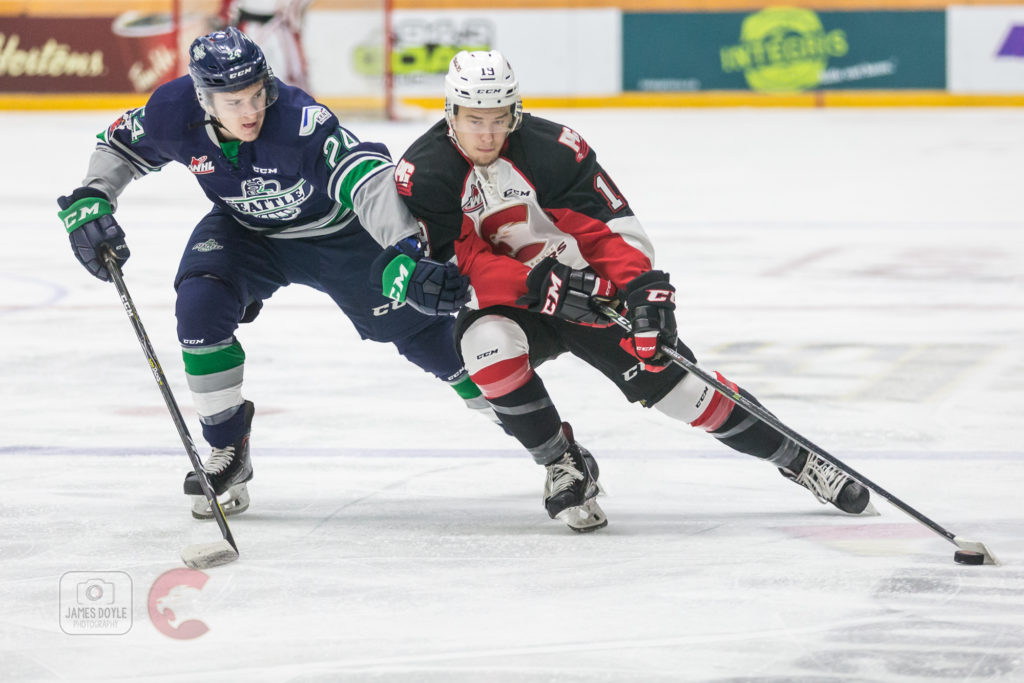 PRINCE GEORGE, BC, January 17, 2018 — The Seattle Thunderbirds received goals from seven different players Wednesday night at the CN Centre to defeat the Prince George Cougars in the second game of a two-game series.

The T-Birds defeated the Cougars 5-2 Tuesday in the first game of the two-game series. The T-Birds finished 4-0 against the Cougars in the four-game season series.

Seattle is back home at accesso ShoWare Center on Friday to play the Kelowna Rockets at 7:35pm. They host the Swift Current Broncos on Saturday at 7:05pm. The game against the Broncos will feature the annual Fred Meyer Teddy Bear Toss presented by WARM 106.9 FM.

The T-Birds are now 22-16-4-2 and are tied for third place in the US Division with the Tri-City Americans. They are six points behind the second place Portland Winterhawks and eight points behind the first place Everett Silvertips.

The two teams combined to score five goals in six minutes during the first period.

Seattle opened the scoring at 7:53 of the period. Dillon Hamaliuk took a shot from the slot that Prince George goalie Tyler Gauthier stopped. Mike MacLean was outside the crease and banged the rebound under the goalie. Jarret Tyszka had the second assist. The goal was MacLean’s first as a T-Bird.

Prince George (17-22-4-3) tied the game a minute later on a goal from Aaron Boyd. Josh Curtis had the only assist.

Prince George turned the puck over in the high slot and Matthew Wedman got the loose puck. Wedman came in all alone on Gauthier and beat the goalie with a move to his backhand at 9:36 for his eighth goal of the season.

The Cougars tied the game 2-2 at 11:11 on a goal from Max Kryski. Vladislav Mikhalchuk and Ryan Schoettler had the assists.

Josh Maser scored a power-play goal at 13:53 of the first to give the Cougars a 3-2 lead. Jackson Leppard and Ilijah Colina had the assists.

The T-Birds tied the game 3-3 at 7:14 of the second period. Nikita Malukhin took a shot from the left circle that trickled through Gauthier’s pad and into the crease. Jaxan Kaluski was skating hard looking for a rebound and slammed the loose puck into the net. MacLean had the second assist on Kaluski’s first goal as a T-Bird.

Seattle took a 4-3 lead on a power-play goal by Sami Moilanen at 11:29. Moilanen took a pass in the slot from Donovan Neuls and snapped a wrist shot past Gauthier for his 18th goal of the season. Nolan Volcan had the second assist.

The T-Birds outshot the Cougars 13-7 in the second period and led 31-14 in shots after two periods.

Hamaliuk extended the T-Birds lead to 5-3 at 4:55 of the third period with a four-on-four goal. Jake Lee carried the puck into the Cougars zone and behind the net. Noah Philp got the puck and found Hamaliuk on the inside edge of the right circle. Hamaliuk brought the puck to his backhand and put the puck over Gauthier for his 11th goal of the season.

The Cougars’ Jack Sander scored a power-play goal at 7:47 of the third to cut the T-Birds lead to one goal. Schoettler and Jared Bethune had the assists.

The T-Birds took the two-goal lead back at 16:31 of the third on a power-play goal by Zack Andrusiak. Neuls had the puck on the left-wing boards and centered it to Moilanen in the slot. Moilanen moved the puck to Andrusiak in the right circle. Andrusiak beat Gauthier with a wrist shot for his 19th goal of the season.

Volcan scored at 17:39 of the third to get the T-Birds seventh goal of the game. Andrusiak took a shot from the right of the net that Gauthier got a piece of, but the puck rolled behind him. Volcan poked the puck in while being knocked down to get his 20th goal of the season. Wedman had the second assist.

Seattle outshot Prince George 13-8 in the third period and 44-22 in the game.