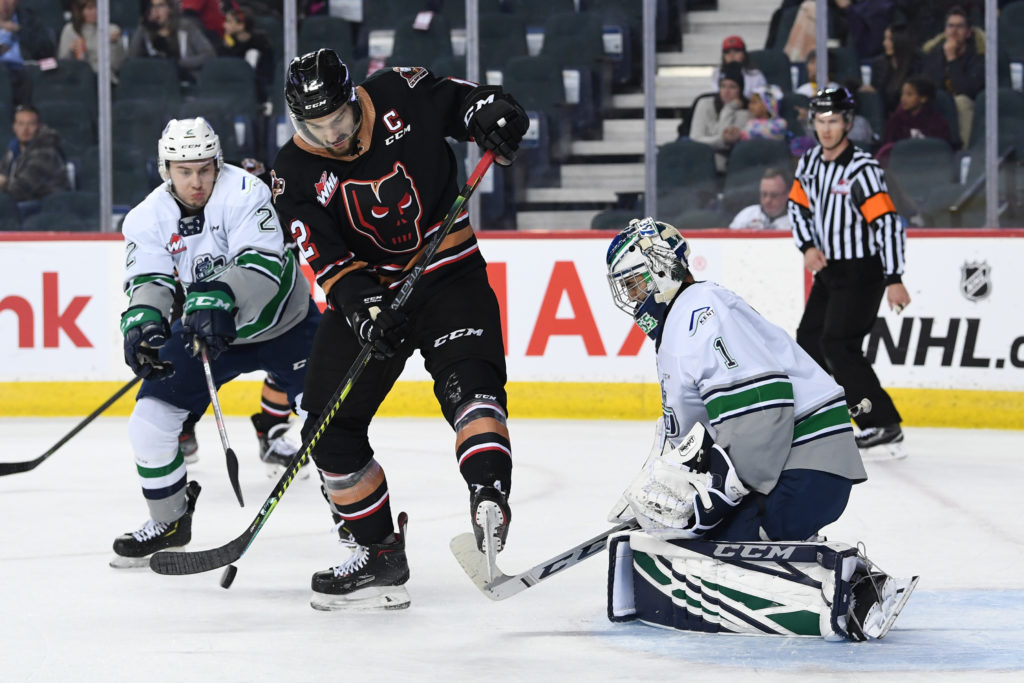 CALGARY, AB, October 28, 2019 — The Seattle Thunderbirds started hot Monday night at the Scotiabank Saddledome with two goals 2:54 into the game. They finished hotter with 33 saves by Roddy Ross as they beat the Calgary Hitmen 2-1.

This was the third of three games on a road trip to the Central Division. The T-Birds were 2-1-0-0 on the trip. Seattle’s next two games are also on the road. They are at the Tri-City Americans on Friday at 7:05pm and at the Portland Winterhawks on Saturday at 6pm. The T-Birds return home to the accesso ShoWare Center on Friday, November 8, to play the Kamloops Blazers at 7:35pm. They host the Everett Silvertips on Saturday, November 9, at 6:05pm. Single game tickets are on sale online on the T-Birds website and at the accesso ShoWare Center box office.

Seattle (5-5-2-1) jumped out to a 1-0 lead 33 seconds into the first period. Henrik Rybinski skated the puck into the offensive zone on the right wing. Rybinski passed the puck to Michael Horon in the right circle who controlled the puck with the inside of his left skate and then quickly crossed it through the slot to Matthew Wedman at the back post. Wedman battled past the Calgary defenseman and chipped Horon’s pass past Calgary goalie Brayden Peters.

Keltie Jeri-Leon made it a 2-0 T-Birds lead at 2:54 of the first. Sam Popowich, who was making his T-Birds debut in the game, chased a loose puck down in the left corner and moved it to Luke Bateman at the left point. Bateman took a wrist shot that was deflected to the right point. Jeri-Leon skated to the puck and spun while taking a wrist shot. Jeri-Leon’s shot hit Peters glove and went into the net.

Popowich was a fifth round selection, 91st overall, in the 2018 Bantam Draft.

Sam Popowich making his T-Birds debut tonight. He was the first T-Bird to hit the ice at @YYCSaddledome for warmups and got in a few laps.#HockeyTraditions https://t.co/WXixwdsgcG

Ross made a very nice left pad save on Luke Prokop with 11 seconds left in the first period to get the T-Birds to the first intermission up 2-0.

Calgary pulled Peters for an extra attacker with 1:12 left in the game. Andrej Kukuca just missed the empty net with a shot from the right circle of the T-Birds zone. With the missed shot the T-Birds were called for icing. They were able to clear the puck three more times, including off a faceoff with four seconds left in the game, to seal the win.