T-Birds Open Preseason with a Shutout 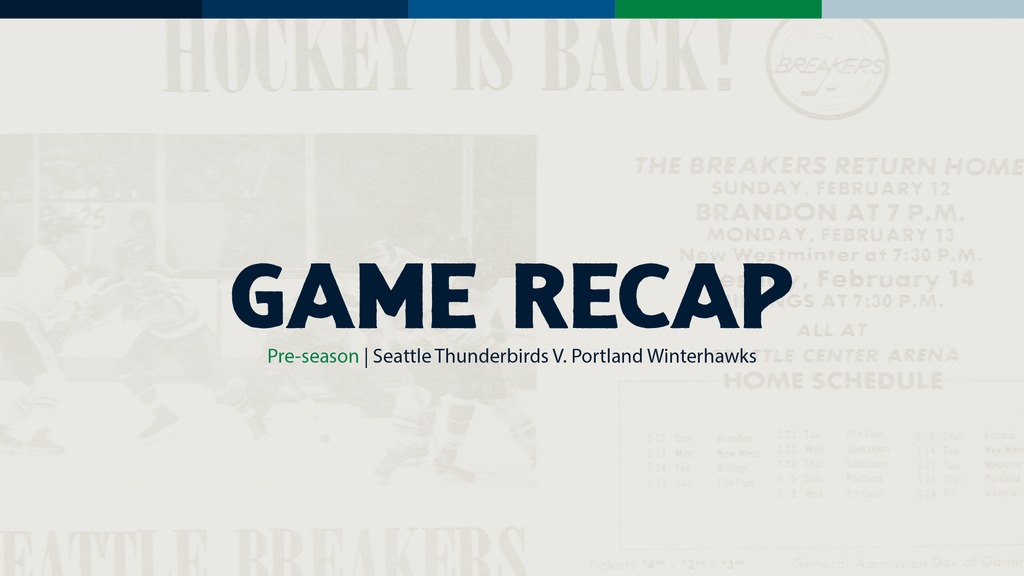 EVERETT, Wash. –Kyle Crnkovic tallied a hat trick, and the Seattle Thunderbirds defeated the Portland Winterhawks, 5-0, Friday at Angel of the Winds Arena in the first preseason game for both teams.  Thomas Milic turned aside 21 shots to register the shutout and Gracyn Sawchyn added four assists. Seattle is back in action Saturday in Everett when they face the Spokane Chiefs in preseason game number two. Game time at Angel of the Winds Arena is 2 p.m.

T-Birds head coach Matt O’Dette thought his team executed well for a first preseason tilt. “I thought it was a good first game. Obviously, we haven’t had a chance to cover all of our systems yet. We want to make sure our identity and good habits are starting to take shape and I thought as the game went along some of that stuff got better.”

Seattle broke out on top, 2-0, in the first period. Crnkovic opened the scoring on the power play, one timing a pass from Kevin Korchinski short side at 10:30. Lucas Ciona gave the T-Birds the two-goal lead when he finished a 2-on-1 rush with Bryce Pickford. Sawchyn had the second assist.

The Thunderbirds added to their lead early in the second period with a shorthanded goal as Crnkovic registered his second of the game at the 3:44 mark, with Sawchyn earning his second assist.  Ciona made it 4-0 Seattle when he scored a 5-on-3 power play goal by tipping home a Korchinski point shot.  Sawchyn picked up his third assist on the goal.

Crnkovic completed his hat trick at 8:35 of the third period.  Once again Sawchyn had the assist, along with Ethan Mittelstaedt.  Crnkovic was acquired by Seattle from Saskatoon just prior to the start of training camp a few weeks ago but says he’s starting to fill comfortable with his new team. “I wasn’t really expecting it (the trade). They (Seattle) were a good team last year and are getting a lot of guys back, so I was pumped to come and now that I’ve been here a few days it seems like an awesome spot and I’m looking forward to the year.”

O’Dette liked the T-Birds debut of both Crnkovic and Sawchyn but also had praise for his other young newcomers. “I thought our returning players played well and I thought our young guys were really good.” He especially liked the effort from a trio of young recently drafted forwards. “I thought (Kazden) Mathies, (Braeden) Cootes and (Simon) Lovsin, as a line together, they really did a good job for us. There’s a lot to like moving forward.”

Seattle, which finished second in the WHL last season on the penalty kill, was a perfect seven for seven  in that department against the Winterhawks Friday and finished 2-of-5 on the power play.

Earlier in the day the Thunderbirds announced the signing of two players to WHL Standard Player Agreements. Spencer Michnik is a goalie and Sylvan Lake, Alberta native. He was selected by the Thunderbirds in the fifth round, 96th overall, in the 2021 WHL Prospects Draft. He becomes the fifth player from the 2021 draft to sign with Seattle.

Also signing was forward Antonio Martorana. The Edmonton product was the T-birds fourth round selection, 82nd overall, in the 2022 WHL Prospects Draft. He is the fourth player from the 2022 draft to sign with Seattle.