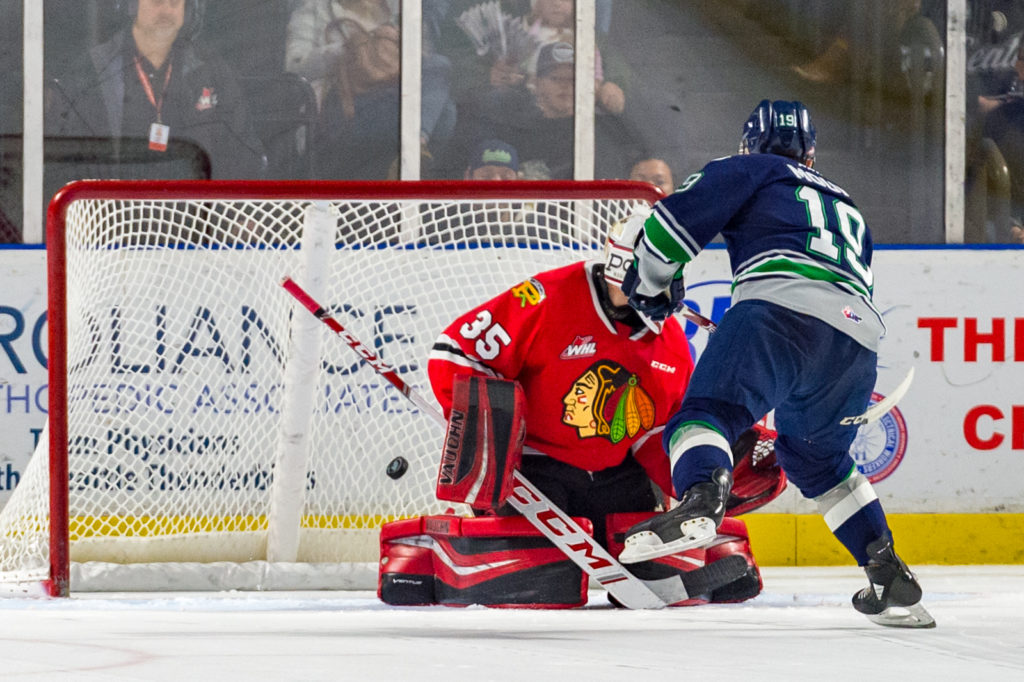 KENT, November 16, 2019 — Payton Mount had a goal and two assists and was one of two Seattle Thunderbirds to score in the shootout Saturday night to help lead his team to a 5-4 shootout win over the Portland Winterhawks in front of 5,554 raucous fans at accesso ShoWare Center.

The T-Birds next game is Tuesday against the Winnipeg ICE at 7:05pm at accesso ShoWare Center. The game is the second Dave and Buster’s 2-for-Tuesday of the season. All tickets, hot dogs, popcorn, soda and beer have two-for-one prices. Single game tickets are on sale online on the T-Birds website and at the accesso ShoWare Center box office.

Mount was the first shooter in the shootout and he beat Portland goalie Isaiah DiLaura over the glove for the goal. Seattle goalie Roddy Ross stopped Portland’s first shooter, Jaydon Dureau, with a sprawling left pad save.

Simon Kubicek was the T-Birds second shooter and he made a move to his right and beat DiLaura high as the goalie lunged to make the save. Cross Hanas was the second shooter for the Winterhawks, needing to score to extend the shootout, and he tried to beat Ross with a backhand shot but put it over the net.

The T-Birds stormed from the bench and mobbed Ross after Hanas missed his attempt.

Defenseman Kevin Korchinski made his T-Birds debut in the game. Korchinski was selected by the T-Birds in the first round, 10th overall, in the 2019 Bantam Draft.

Portland took a 1-0 lead on a power-play goal by Johnny Ludvig at 4:11 of the first period.

Seattle tied the game 1-1 at 6:41 of the first on Alex Morozoff’s third goal of the season. Conner Bruggen-Cate got a loose puck and skated into the left circle. Bruggen-Cate took a wrist shot that Morozoff, standing in front of DiLaura, tipped into the net. Payton Mount had the second assist.

The T-Birds took a 2-1 lead on a power-play goal by Bruggen-Cate at 3:14 of the second period. Mount passed the puck to Owen Williams who carried it to center ice inside the blue line. Williams took wrist shot that Bruggen-Cate redirected down and past DiLaura for his fourth goal of the season.

Portland had 58 seconds of a five-on-three power play five minutes into the second. Mount, Williams and Luke Bateman all blocked shots and goalie Roddy Ross made three solid saves to deny the Winterhawks a second goal.

Mount gave the T-Birds a 3-1 lead at 11:55 of the second with a power-play goal. Kubicek took a slap shot from the mid-point that hit Mount and fell to the ice. Mount corralled the puck and beat DiLaura with a hard wrist shot for his second goal of the season. Bruggen-Cate had the second assist.

Keltie Jeri-Leon put the T-Birds in front 4-3 at 7:59 of the third. Jeri-Leon took pass from Reid Schaefer in the slot and beat DiLaura over the glove with a hard wrist shot. Schaefer’s assist was his first point in the WHL. Matthew Rempe had the second assist.

Henrik Rybinski was awarded a penalty shot in overtime with 1:14 left when he was taken down on a breakaway. DiLaura made a glove save on Rybinski’s attempt.