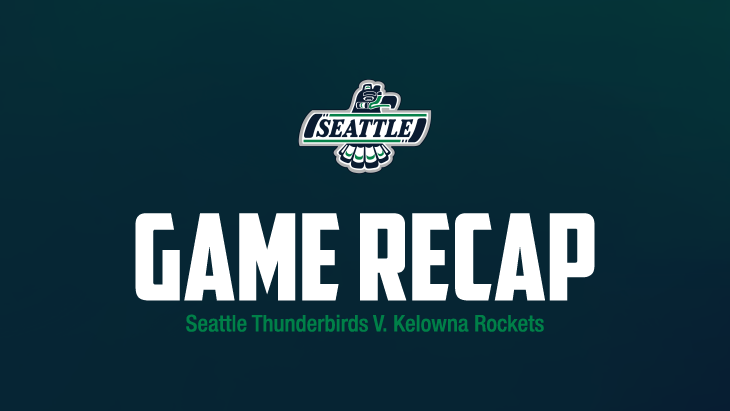 KELOWNA B.C. –Adam Kydd scored an overtime power play goal, and the Kelowna Rockets edged the Seattle Thunderbirds, 3-2, to stave off elimination at Prospera Place Wednesday in game four of their best-of-seven, first round playoff series. Seattle still lead the series, three games to one, and get another chance to close out the series when they host game five Friday at the accesso ShoWare Center. Game time is 7:05 p.m.

“We know the fourth game is the toughest game to win,” said head coach Matt O’Dette “We just didn’t play well enough to close out a team in that situation.”

The Thunderbirds scored the game’s first two goals, both from Lucas Ciona, to stake themselves to the early lead.  Ciona’s first goal came in the final minute of the first period, as he finished a 2-on-1 rush with Jordan Gustafson.

Ciona struck again at 3:16 of the second period when he pounced on a rebound and knocked it past Rockets goalie Talyn Boyko.

The Rockets began their comeback with a Gabriel Sztrurc power play goal at 6:28 of period two. “We have to have a clear instinct in that situation,” said O’Dette. “They got a bounce on their power play, and it give them some life.” Kelowna then tied it at 2-2 when Noah Dorey struck at 12:45.

The game remained scoreless until the Kydd game winner at 15:55 of the first overtime period.  The goal came with the Rockets skating on the man advantage after Seattle’s Reid Schaefer was assessed a tripping penalty.

The Thunderbirds ended up outshooting the Rockets 38-29 but O’Dette didn’t think they made it difficult enough on Boyko. “Not enough traffic, not enough inside the perimeter chances. He’s a good goalie and when we’ve had success against him, it’s by gettting in front of him. We didn’t do enough of that tonight.”

It was the first time in the series that the T-Birds lost the special teams battle. Seattle was 0-for-3 on the power play while Kelowna was 2-for-5.

Rockets winger Mark Liwiski was assessed a two-game suspension by the league for his Check to the Head major on Schaefer in game three.  He sat out game four and will miss game five as well.