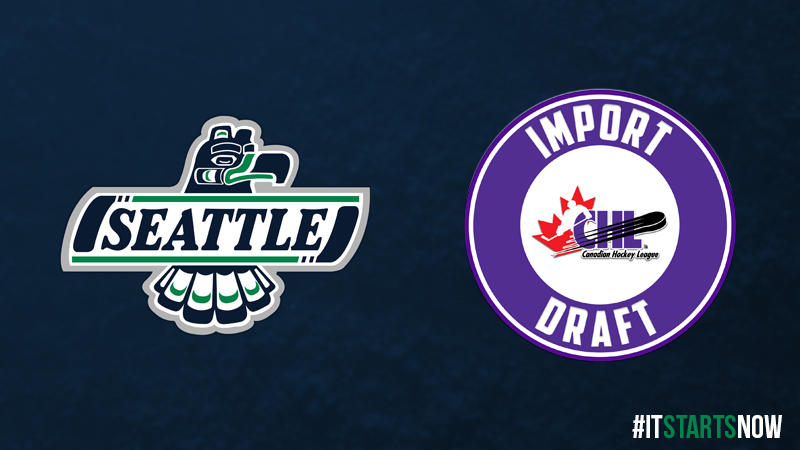 Annual CHL Import Draft set for Tuesday, June 30, at 8am

The Import Draft starts at 8am on Tuesday, June 30, and can be followed online on the CHL website.

“We feel very fortunate to have third year defenseman Simon Kubicek returning to our team for another year,” said T-Birds general manager Bil La Forge. “We hope to add a player with the potential to add to our already deep and youthful lineup.”

The T-Birds also have the 81st overall selection in the 2020 Import Draft but it is unlikely the team will use this selection with Kubicek returning.

Last season the T-Birds two Import players were right wing Andrej Kukuca from Slovakia and defenseman Simon Kubicek from the Czech Republic. Both Kukuca and Kubicek were selected in the 2018 Import Draft.

Kukuca led the team in scoring last season with 26 goals and 31 assists for 57 points. In the 2018-19 season Kukuca represented Slovakia at the 2019 World Junior Championship.

Kubicek was the highest scoring defenseman on the team last season with seven goals and 20 assists for 27 points in 52 games. He represented the Czech Republic at the 2020 World Junior Championship. Kubicek is ranked number 136 in the NHL Central Scouting Final Rankings for 2020 NHL Draft eligible players.

Teams are permitted to select in the Import Draft if they have less than two import players on their current roster. Entering the draft, the T-Birds have one Import Players on the roster, defenseman Simon Kubicek. Kukuca was a 20-year old player last season and has graduated from the WHL.

The two-round draft will take place online with the order of selection rotating through each of the CHL’s three leagues using an inverse order of final regular season standings within each league from the 2019-20 season.