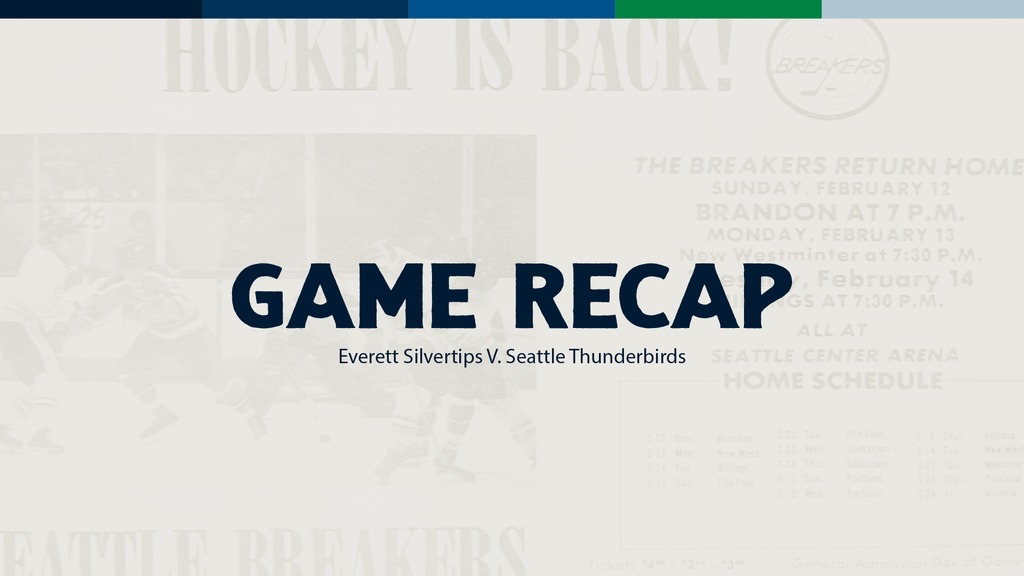 KENT, Wash. –The Seattle Thunderbirds scored early and often and defeated the Everett Silvertips, 6-2, Saturday at the accesso ShoWare Center. It was Seattle’s sixth win in six games against their division rivals and improves their record on the season to 32-7-1-1. The Thunderbirds next game is slated for next Friday when they travel to Spokane to play the Chiefs. Game time is 7:05 p.m.

Thunderbirds head coach Matt O’Dette lauded his team’s start. “That’s the way you want to play, when you come out of the gate playing the right way, playing the way we need to play to be successful. Everyone bought in. That was a key for us tonight.”

Seattle scored three times in the opening period. It started with a Tij Iginla unassisted goal at 3:02. Four minutes later Nico Myatovic knocked in a puck on a goal mouth scramble after a Jeremy Hanzel shot from the blue line found its way to the net.  Hanzel would finish the night with three assists. “The team in general just played the way we’re supposed to. The points, they come along with playing the right way, doing the right things on the ice.”

Seattle’s third goal of  the first period would count as the game winner.  It came off the stick of Jared Davidson who tallied his team leading 23rd of the season.  The lone assist went to Braeden Cootes.  Playing in just his second WHL game, The Thunderbirds 2022 first round draft pick, won an offensive zone face off and got the puck back to Davidson.

“It’s for sure a lot faster pace here, than playing U18 in Alberta, but I adjusted to it after the first game and it started to feel more normal,” said Cootes. “It felt better as the two games went on and I got the first point, which was nice.”

The Thunderbirds would strike for three more goals in the second period. Kevin Korchinski scored at 8:27, with Iginla and Hyde Davidson assisting. Kyle Crnkovic then added two more, scoring at 10:14 and again at 18:29 with Hanzel earning assists on both goals.

Seattle let off the gas a bit in the third period and Everett scored a pair of goals to complete the scoring. The Thunderbirds ended the game outshooting the Silvertips 48-15. “We talk about it all the time,” said O’Dette. “Just play direct, not look for a better shot, take the shot that’s there, get bodies to the net and you’ll be rewarded. That was the mind set tonight and it paid off for us.”

Thomas Milic had to make just thirteen saves to earn his fourteenth win in net.

After Friday’s road game in Spokane, Seattle is back on the ice at the accesso ShoWare Center next Saturday when they host the Portland Winterhawks at 6:05 p.m.

In six games this season Seattle has outscored Everett 31-10.

The Thunderbirds got five points (1g, 4a) from players aged 17 years old and younger.

All six Seattle goals were scored even strength as they were awarded just one power play and that didn’t occur until the third period.

A season ago the Thunderbirds didn’t earn their 32nd win until February 25th (Game 50).