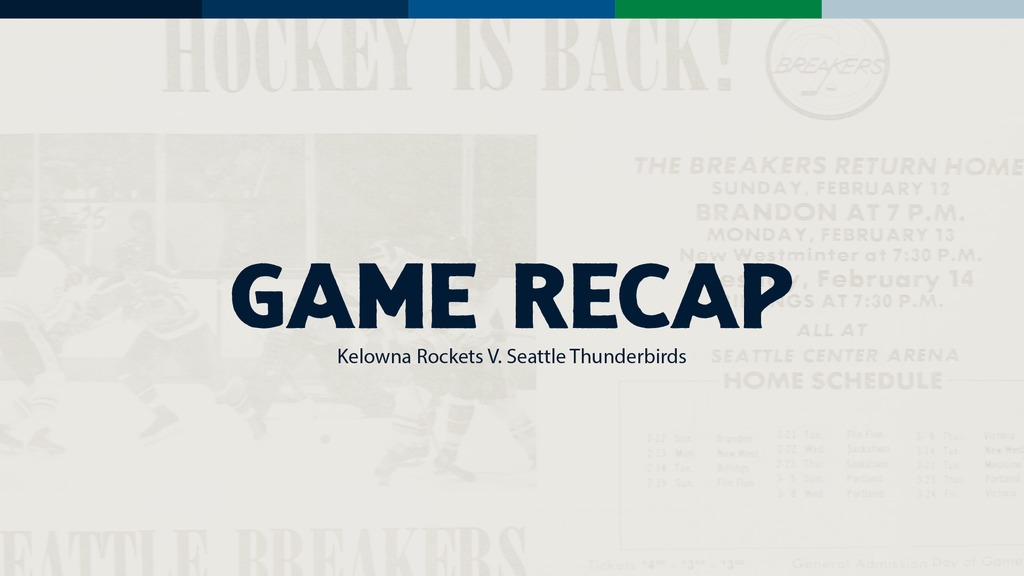 KENT, Wash. –Jared Davidson scored a pair of goals and the Seattle Thunderbirds skated past the Kelowna Rockets, 4-2, Wednesday at the accesso ShoWare Center. Kyle Crnkovic and Reid Schaefer also scored in the win as Seattle improved to 14-3-1-0 on the season. The Thunderbirds are back in action Friday to complete their four-game homestand.  They host the Portland Winterhawks at 7:05 p.m.

Thunderbirds head coach Matt O’Dette felt his team played a fairly complete sixty minutes of hockey. “Pretty efficient. Our habits were good, for the most part. We didn’t really give up a whole lot. I thought it was a step in the right direction, in how we want to play.”

It didn’t take long for Seattle to get on the board as Davidson stole a puck just outside the Kelowna blue line, skated in and scored just sixty-one seconds in. “That’s one of our keys to the game.” Davidson said about getting off to a good start. “We want to start off strong. I got lucky enough to get one quick on the board.”

The Rockets equalized less than two minutes later when Adam Kydd scored off his own rebound and the game was tied 1-1 after the first period.

Seattle regained the lead with Davidson’s second of the game, a power play goal at 4:58 of the second period. After a 3-for-31 stretch with the man advantage, the T-Birds now have power play goals in back-to-back games. “We’ve had lots of chances,” said Davidson of their recent struggles with the man advantage. “The puck was just not going in for us lately. It was good to get that one and get off the schneid.” Kevin Korchinski and Lucas Ciona had the assists.

Once again, the Rockets responded when Jackson DeSouza blasted one in at 9:22. But it took the Thunderbirds less than two minutes to get the lead back for good when Kyle Crnkovic scored at 11:12, burying a feed from Tij Iginla.  Sawyer Mynio had the second assist.

To protect their one-goal lead Seattle had to kill off a Kelowna two-man advantage late in the second period.  Goaltender Scott Ratzlaff said the team did a good job in front of him limiting the Rockets chances. “You go down 5-on-3, the guys really have to watch their lanes, block shots when they have to, and they did a great job.” He said they were good all night on the penalty kill.  “I appreciate those defenders going down on their knees and blocking those shots.”

Ratzlaff ended the night with 22 saves in earning his sixth win.  It was his first game action since beating Spokane back on November 11th, nearly two weeks ago. He said he uses practice to stay focused. “We work a lot on our special teams, lots of game scenarios. I try to translate that to game situations as much as possible.”

Seattle held on to the lead through the third period, including another penalty kill as the period began.  O’Dette said newcomer Nolan Allan was a big contributor in that department. “He reads the play well. He made it hard on their top guys all night. He’s pretty nasty to play against, which is great for us.”

Schaefer put the game away with an empty net goal at 18:32 of the third period, with Nico Myatovic and Jeremy Hanzel assisting.

After Friday’s home game against Portland, Seattle hits the road for a Sunday matinee matchup with the Tri-City Americans at the Toyota Center in Kennewick.

Ty Hurley made his Thunderbirds debut against the Rockets. Hurley was acquired last week from the Swift Current Broncos.

Luke Prokop missed his second game with a lower body injury and is listed as week-to-week.

Coster Dunn returned to the Thunderbirds lineup after missing four games with an upper body injury.