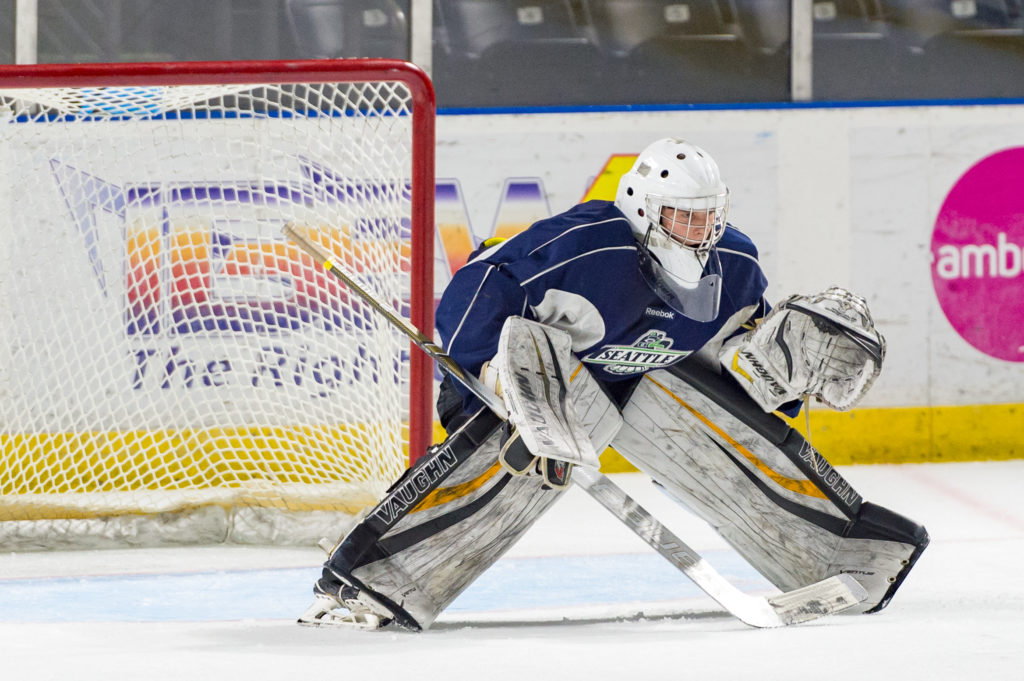 Calgary, Alta. –Seattle Thunderbirds prospect goalie Thomas Milic has been invited to Hockey Canada’s Program of Excellence Goaltending Camp in preparation for the 2019-20 season with a four-day goaltending camp at the Markin MacPhail Centre at WinSport’s Canada Olympic Park in Calgary.

Milic is one of eight WHL goaltenders that have been to the camp.

Milic was selected by the T-Birds in the third round, 51st overall, of the 2018  Bantam Draft. Last season Milic played 20 games for the Burnaby Winter Club Prep team in the CSSHL and had a .908 save percentage and a 2.41 goals against average.  Milic signed a Standard WHL Player Agreement on August 28, 2018.

The camp brings together the top goaltending talent and elite-level instructors from across the country. They serve as the initial evaluation stage for summer development and selections camps for Canada’s national teams.

Leading the way at the under-20 level are WHL goaltenders Roman Basran (Abbotsford, B.C. / Kelowna Rockets), Taylor Gauthier (Calgary, Alta. / Prince George Cougars), Nolan Maier (Yorkton, Sask. / Saskatoon Blades), and Trent Miner (Brandon, Man. / Vancouver Giants). The quartet of goaltenders are on the radar of the National Hockey League’s Central Scouting service ahead of the 2019 NHL Draft later this month in Vancouver, B.C. In April’s final rankings, Miner was the top-ranked goaltender of the four invited, coming in at sixth among North American goaltenders. Gauthier is ranked seventh, Basran is 18th, and Maier is 22nd.

At the under-18 level, Dylan Garand (Victoria, B.C. / Kamloops Blazers) earned an invitation. Garand was part of the driving force behind the Blazers securing a playoff spot in the final 10 days of the 2018-19 WHL Regular Season, posting a 5-0-1-0 record, 1.63 goals-against average, a .939 save percentage, and one shutout down the stretch. Garand then won the ensuing tiebreaker game on March 19, 2019 against the Rockets, stopping 27 of 28 shots.

Invited to participate in the camp at the under-17 level were a trio of WHL goaltenders in Tyler Brennan (Winnipeg, Man. / Prince George Cougars), Thomas Milic (Coquitlam, B.C. / Seattle Thunderbirds), and Drew Sim (Tees, Alta. / Vancouver Giants). All three goaltenders were selected in the 2018 WHL Bantam Draft and represented their respective provinces at the 2019 Canada Winter Games in Red Deer, Alta.

All on-ice sessions are open to the public and media.

For more information on Hockey Canada, the Program of Excellence and National Women’s Program, please visit HockeyCanada.ca or follow through social media on Facebook and Twitter.