T-Birds Get Fancy To Chase Down Rebels 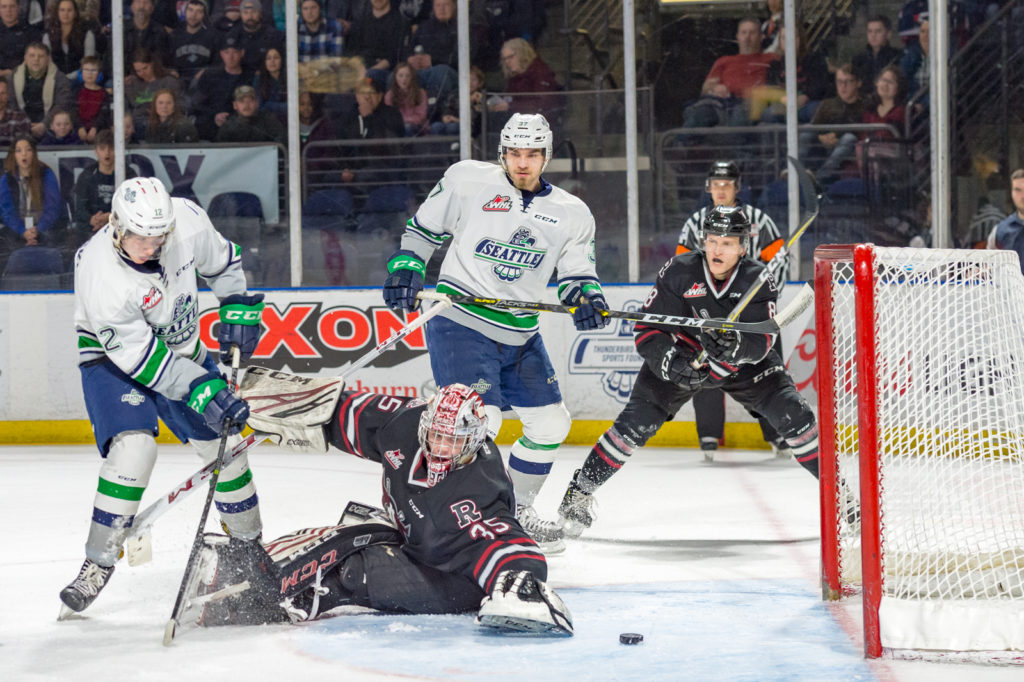 KENT, February 15, 2019 — Henrik Rybinski and Matthew Wedman each had two goals Friday night in front of 4,575 at accesso ShoWare Center to lead the Seattle Thunderbirds to a 6-4 win over the Red Deer Rebels.

Noah Philp had a goal and an assist. Sean Richards and Jarret Tyszka each had two assists.

Seattle improves to 22-27-5-1 and now lead the Kamloops Blazers by three points for the second wild card playoff spot in the Western Conference. The Blazers have one game in hand on the T-Birds.

The T-Birds host the Everett Silvertips on Saturday at 6:05pm at accesso ShoWare Center. They travel to Portland to play the Winterhawks on Sunday at 4pm in a game that is being televised on JOEtv Channel 22/110.

The T-Birds scored four goals in the second period to get a 5-1 lead over the Rebels after two periods.

Rybinski made it a two-goal lead at 10:13 on the power play. Tyszka crossed the puck to Philp at the right point. Philp skated to the top of the right circle and made a wrist pass with Rybinski in the slot. Philp’s pass went off Rybinski’s stick and past Fancy for his second goal of the game. Wedman had the second assist.

Andrej Kukuca scored unassisted at the 14-minute mark to make it a 4-1 lead. Kukuca intercepted a pass in the high slot and came in on Fancy. Kukuca beat Fancy over the blocker for his 20th goal of the season.

Rybinski scored his second of the game, at 15:14 of the, to make it 5-1. Tyszka put the puck in the left corner to Rybinski. Rybinski found Graeme Bryks in the low slot. Bryks took a shot that Fancy stopped but Rybinski followed the play and banged in the rebound for his fifth goal of the season.

Red Deer cut the T-Birds lead to two with goals by Alexander Alexeyev at 3:30 and Oleg Zaytsev at 4:03 of the third period.

Red Deer pulled Fancy with 2:57 left in the third for an extra attacker. It paid off as Reese Johnsons scored at 18:34 off an assist from Cameron Hausinger.

Fancy stayed on the bench for the extra attacker. Jaxan Kaluski cleared the puck up the right boards where Wedman chased the puck down. Wedman hit the empty net from the blue at 19:02 to secure the win. Tyrel Bauer had the second assist.