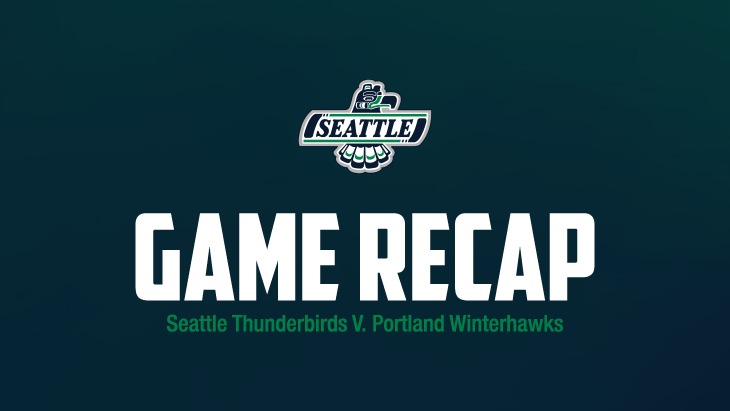 Kent, WA. – Thomas Milic turned aside 31-shots, Reid Schaefer contributed a goal and two assists, and the Seattle Thunderbirds defeated the Portland Winterhawks, 4-2, Friday at the accesso ShoWare Center. The win was Seattle’s eighth in a row and third in four tries against Portland this season. The Thunderbirds are back in action Saturday. They travel north to Everett to face the Everett Silvertips at Angel of the Winds Arena. Game time is 6:05 p.m.

The Thunderbirds (10-2-1-0) used a strong first period to build an early three goal lead. It was the second time in their last two meetings that the T-Birds put up three first period goals against the Winterhawks. Seattle opened the scoring at 8:13 on Henrik Rybinski’s third of the season. The goal, assisted by Schaefer and Jared Davidson, moved Rybinski’s point streak to eight games.

The Thunderbirds doubled their lead just over two minutes later. This time Schaefer got the goal with Rybinski and Davidson getting the helpers. Then, with just over two minutes left in the period, Sam Oremba scored his first of the season, unassisted, when he finished a rush with a backhand shot through the pads of Portland goalie Lochlan Gordon. The goal would stand up as the game winner.

Seattle fell into penalty trouble in the second period. Portland (5-8-0-1)was awarded five power plays, including two lengthy 5-on-3s. They capitalized on the first when James Stefan knocked home a rebound at 9:53, but the T-birds penalty killers denied them the rest of the way. Milic, who faced just two shots in the first period, was the key making 15-saves in the second. “A first period like that, it’s not common to happen, especially against a team like Portland, a rival of ours. The big thing for me was staying mentally focused.”

That focus had him ready for the busy second period, but he said it was a team effort. “It was definitely a change of pace, having to kill off those penalties, but our killers did a really good job blocking shots, getting sticks in lanes and not making my job too difficult.”

T-Birds Head Coach Matt O’Dette would prefer his team stay out of the box, but says his players stepped up when needed. “Obviously the first period was really, really good. If we could bottle that up and duplicate that every time we’d be in good shape.” He wasn’t happy with some of the penalties called, but says his team also didn’t come out for the second with the same good habits as the first. “It led to us taking some penalties and some of them were head scratchers, but it started with us not coming out the same in the second as we did in the first. But guys dug deep, found a way and we got it done.”

Portland sliced Seattle’s lead to 3-2 at 1:44 of the third period on Gabe Klassen’s sixth of the season,but Seattle answered back a minute and a half later with a breakaway goal from their captain, Ty Bauer. For the big defenseman it was his third goal of the season, but his first point against Portland in four tries. “We made a good play on the wall, the Red Sea just kind of parted, so I thought I’d take a chance and it ended up paying off, but it starts with a great defensive play.” Schaefer earned the lone assist on the goal.

The eight-game winning streak is the longest since the T-Birds won seven in a row between January 21st and February 11th, 2017. Seattle is on the road for their next two games but return home next Saturday, November 20th, to host the Kamloops Blazers. Tickets are available at seattlethunderbirds.com.

Earlier this week the Thunderbirds broke into the KIA CHL Top Ten Poll for the first time this season, coming in at number nine. The weekly rankings are selected by a panel of National Hockey League scouts. Their next opponent, Everett sits at number four in that poll.

Jordan Gustafson was held off the board, which snapped his six-game point streak.