T-Birds Fall To Winterhawks in Shootout 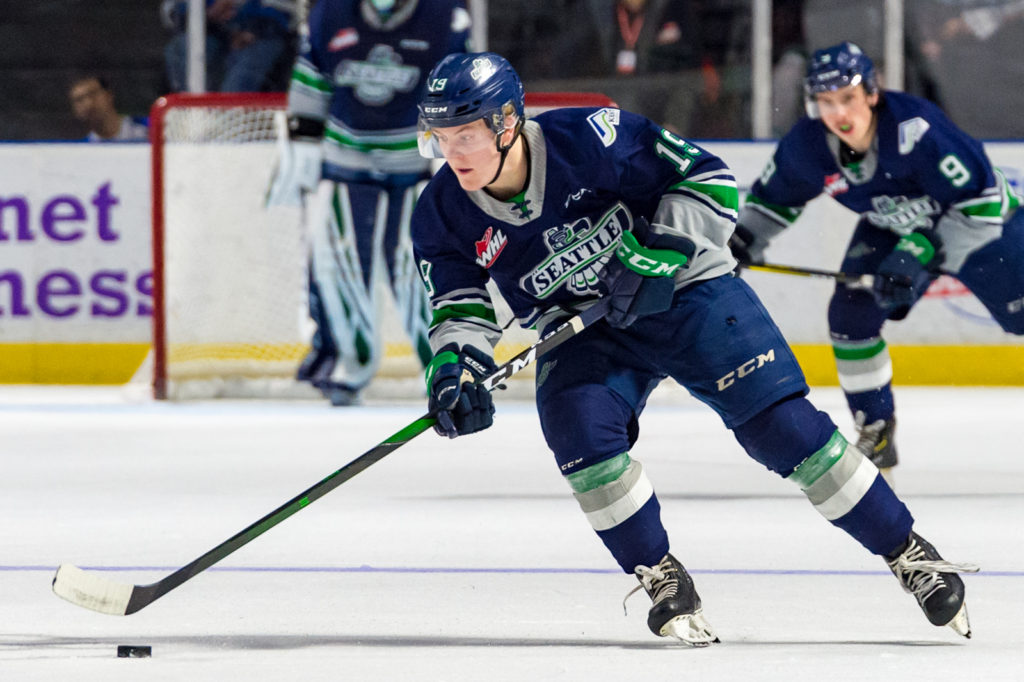 KENT, January 25, 2020 — The Portland Winterhawks defeated the Seattle Thunderbirds 6-5 in a shootout in front of 5,705 at accesso ShoWare Center on Saturday night.

Rempe put the T-Birds in front 1-0 2:10 into the first period. Conner Bruggen-Cate had the puck in the neutral zone and passed it to Andrej Kukuca at the blue line on the right wing. Kukuca took two strides and fired the puck to Rempe crashing the net. The puck went off Rempe’s skate and past Hofer.

The T-Birds made it a 2-0 lead at 7:01 of the first. Lucas Ciona passed the puck from the left corner to Max Patterson in the right corner. Patterson found Payton Mount all alone in the slot. Mount beat Hofer over the glove for his 10th goal of the season.

Portland cut the lead to one goal at 12:22 of the first when Cross Hanas scored.

The Winterhawks tied the game 2-2 on a shorthanded goal by Jaydon Dureau at 14:50 of the first.

Seth Jarvis scored on the power play at 16:51 and then at even strength at 18:32 to make it a 4-2 Winterhawks lead going into the first intermission.

Reece Newkirk scored on the power play at 4:31 of the second to put Portland in front 5-2.

Cade McNelly started the T-Birds come back at 6:50 of the second. Mount put Rempe in on a partial break but he wasn’t able to get a shot off. As he crossed the goal line Rempe backhanded the puck back into the slot. McNelly took the pass and beat Hofer over the glove with a hard wrist shot.

Mount cut the Winterhawks lead to one at 15:49 of the second on the power play. Owen Williams passed the puck to Max Patterson in the right circle. Patterson took a slap shot that Hofer stopped but couldn’t cover. Mount skated, got the puck and swept it past the outstretched left leg of the goalie for his second goal of the game.

A great hustle play by Simon Kubicek with 37 seconds left in the second tied the game 5-5. McNelly sent the puck from the defensive zone to Keltie Jeri-Leon in the neutral zone. Jeri-Leon took a long shot that bounced off Hofer into the low slot. On the Jeri-Leon shot Kubicek sprinted up the ice and was able to muscle past a Winterhawks defenseman and put the puck into the net.