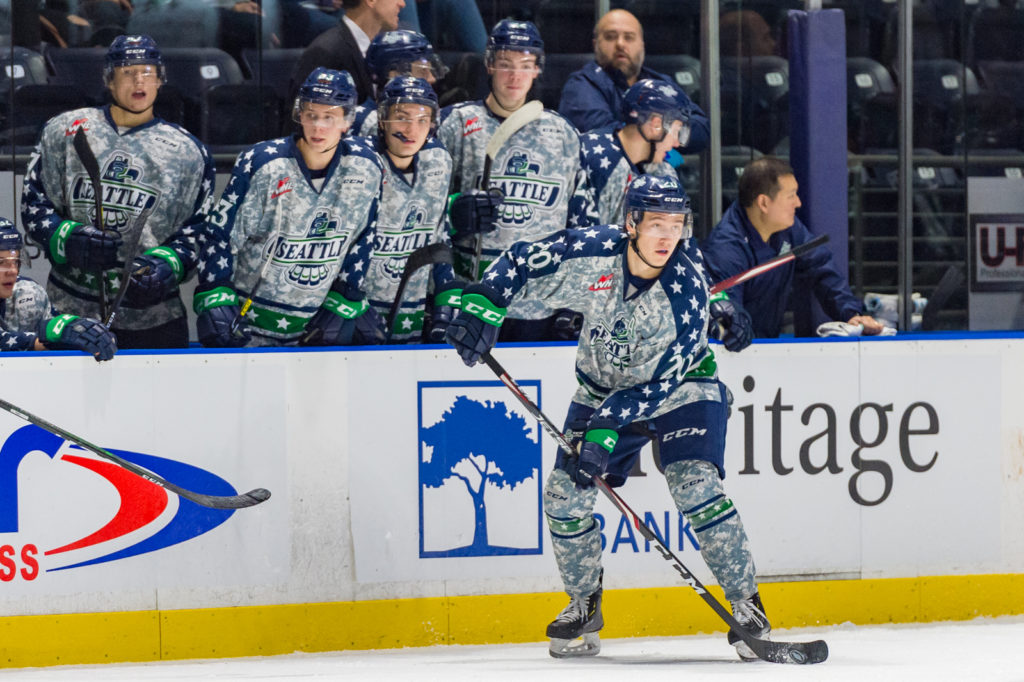 With Veterans Day on Monday the T-Birds celebrated those who serve our country with Military Appreciation Night, which included a special puck drop ceremony with two former military members.

Former U.S. Air Force Technical Sergeant Krista Tannery who served for 12 years and former U.S. Navy Electrician’s Mate John Stahfest who served for 5 years dropped the pucks tonight on Military Appreciation Night. Thank you Veterans for all you have done to serve our country! pic.twitter.com/J86YOUx79d

Everett got goals from Dawson Butt and Conrad Mitchell in the second period to take a 2-0 lead after two periods.

Martin Fasko-Rudas scored a power-play goal in the third period to make it 3-0 Everett.

Seattle got on the board at 11:11 of the third on a slap shot goal from Tyrel Bauer. Bauer took a pass from Conner Bruggen-Cate at the right point and his shot beat Everett goalie Keegan Karki on the glove side. Henrik Rybinski had the second assist on Bauer’s first goal of the season.

Goalie Roddy Ross was pulled late in the game for an extra attacker. Wyatte Wylie was able to hit the empty net to get Everett’s fourth goal.

Seattle didn’t quit and was able to cut the Everett lead to two with 1:39 left in the third on Matthew Rempe’s first goal in the WHL. Brendan Williamson carried the puck into the offensive zone on the left wing and crossed it to Rempe coming down the slot. Rempe beat Karki over the glove for the goal. Payton Mount had the second assist.

HIS FIRST GOAL IN THE WHL!!!! pic.twitter.com/75QCdU0pwe

Ross stayed on the bench off the ensuing faceoff but the T-Birds were not able to get a third goal.