T-birds Fall Late in Game One 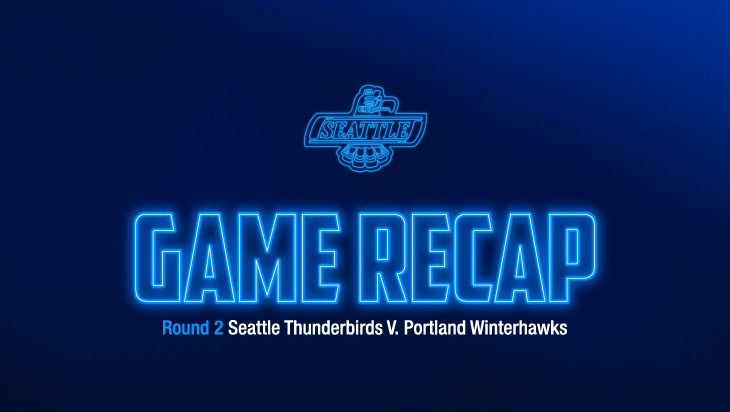 KENT, Wash. –A late power play goal was the difference as the Seattle Thunderbirds fell, 4-2, to the Portland Winterhawks at the accesso ShoWare Center Saturday in the first game of their best-of-seven, second round playoff series. The two teams faceoff again Sunday in game two of the series. That game will take place at the Veterans Memorial Coliseum in Portland. Game time is 5:00 p.m.

“It’s disappointing. I thought we did some good things tonight,” said T-birds head coach Matt O’Dette. “We could have done more to give ourselves a better chance to win. We know they look for their power play opportunities and chances with their transition game.”

Seattle struck first when Jared Davidson scored his fourth of the playoffs midway through the first period, with Lukas Svejkovsky and Lucas Ciona assisting.

Portland tied, and then took their first lead with goals six minutes apart in the second frame.  Marcus Nguyen scored first at 8:44 then James Stefan scored at 14:44 on a breakaway as the teams skated four aside. The T-birds got it back to 2-2 when Matt Rempe knocked home a loose puck in front of the Portland goal with one minute left in the period.  Conner Roulette and Nico Myatovic had the assists on Rempe’s fourth of the postseason.

It remained tied until the Winterhawks went on the power play with just under five minutes remaining in the third period.  Clay Hanus scored with a point shot at 16:21. Seattle pulled the goalie for the extra skater in the final minute but couldn’t capitalize, missing an open net with a late shot.  Portland’s Robbie Fromm-Delorme then scored into the empty net at 19:48 to finish the scoring.

O’Dette felt it was too close a game to be decided by a late penalty. “I find it hard to believe our only power play earned was a puck that hit their guy leaning over the boards. That’s the only call we got. It’s a little bit of a head scratcher.” Portland finished 1-for-4 on the power play while Seattle was 0-for-1.

Thunderbirds General Manager Bil LaForge agreed. “I think it’s unfortunate. There were too good hockey teams out there tonight, playing really hard. Portland always seems to be politicking for more penalties. Going off the ice after periods, they’re talking to the refs the whole way. Our coaches don’t do that. Maybe we should start doing that and the calls would be more even.”

The last penalty, that led to Portland’s game winning goal, especially was disappointing to LaForge. “How you can call a hooking penalty at one end, when 25-seconds before there was a similar play at the other end and there’s no call. I have no problem if you put the whistle away, but put it away for both teams.”

The T-birds also hit at least three posts in the game, including two in the third period. “It was a tight game, a playoff game,” said O’Dette. “We know we have a tough opponent. There’s no secret there. It’s gonna be a dog fight and we’re digging in for a long series.”

This is just the fifth playoff matchup between these two longtime rivals in the past 25 years.  The last postseason meeting was in 2015, a first round series won by the Winterhawks, four games to two. Seattle’s last playoff win over Portland was 2002 when they beat the Winterhawks four games to three in a first-round battle.

Because of building availability issues in Portland, this series will not follow the traditional 2-2-1-1-1 format, but rather will be 1-2-1-1-1-1, though Portland, as the higher seed, will still have home ice advantage.  After Game One in Kent, the next two games will be in Portland with Game Four next Friday back at the accesso ShoWare Center. If necessary, the Winterhawks would host Game Five, Seattle Game Six and Game Seven would be back in Portland.

T-birds Doubled Up in Game Three
9 hours ago