T-Birds Fall In Overtime To Chiefs 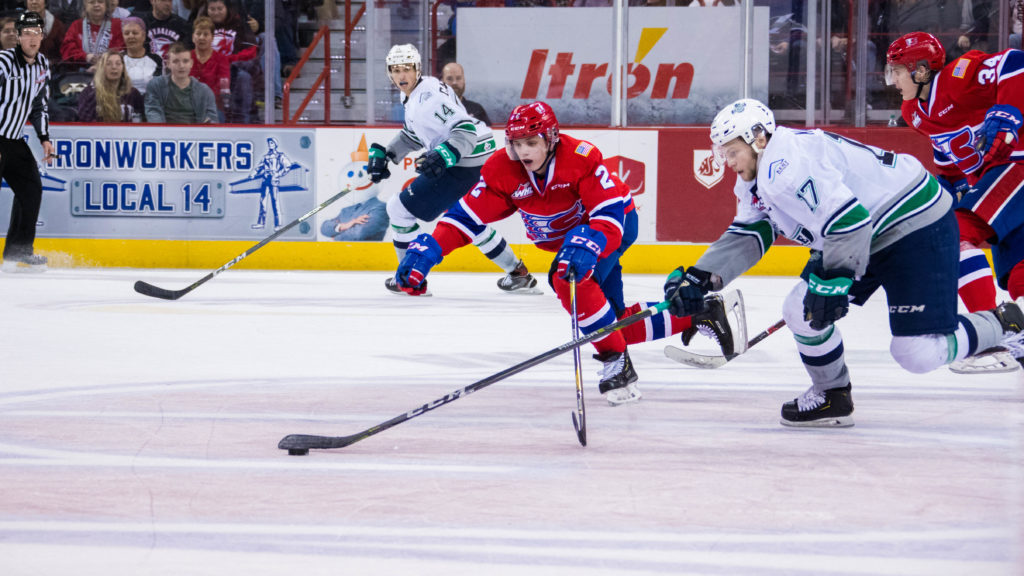 Matthew Wedman and Dillon Hamaliuk each had two goals in the game. Nolan Volcan had a goal and an assist and Jarret Tyszka had two assists.

The T-Birds now have a 11 day break for the holidays. They are back in action on Friday, December 28, against the Prince George Cougars at 7:35pm at accesso ShoWare Center.

Seattle (11-16-4-0) took a 1-0 lead at 5:29 of the first period on Volcan’s 13th goal of the season. Volcan took a pass from Zack Andrusiak and skated into the high slot. Volcan beat Spokane goalie Dawson Weatherill with a snap shot over the glove.

The Chiefs took a 2-1 lead on a power-play goal by Luke Toporowski at 15:44 of the first. Russell and Jake McGrew had the assists.

Seattle tied the game 2-2 at 10:27 of the second period on a power-play goal from  Wedman. Andrusiak had the puck in the left circle and took a shot with Wedman screening Weatherill. Wedman knocked the rebound past Weatherill for his 10th goal of the season. Tyszka had the second assist.

Hamaliuk put the T-Birds in front 3-2 at 13:04 of the second with his 10th goal of the season. Tyrel Bauer had the puck at the right point and sent it low to Tyler Carpendale. Carpendale skated into the low right circle and took a shot that rebounded to Hamaliuk in the left circle. Hamaliuk had the whole net to shoot at with Weatherill still down from making the save on Carpendale. Hamaliuk quickly hit the back of the net before Weatherill could get over to attempt a save.

Spokane tied the game 3-3 at 15:32 of the second on a goal from Luc Smith. Ethan McIndoe had the only assist.

Seattle outshot Spokane 16-4 in the second period and led 25-16 in shots after two periods.

Beckman scored at 1:04 of the third period to give the Chiefs a 4-3 lead. Eli Zummack had the only assist.

Wedman scored his second of the night to tie the game 4-4. Wedman took a pass Volcan on the rush. Wedman snapped a shot on goal from the high slot hat hit the left post, the right post and then went into the net at 8:07. Jake Lee had the second assist.

Spokane took the lead back, 5-4, at 11:01 of the third on a goal from Noah King. McGrew and Beckman had the assists.

Hamaliuk tied the game 5-5 at 17:11 of the third on the power play. Wedman won the puck off a faceoff in the right circle back to Tyszka at the right point. Tyszka skated to his left and then passed the puck back to Hamaliuk in the right circle. Hamaliuk skated at Weatherill and beat the goalie over the blocker for tying goal.

Spokane outshot Seattle 16-12 in the third period with the T-Birds leading in shots 37-32 after regulation.

Zummack scored at 1:47 of overtime to win the game for the Chiefs.