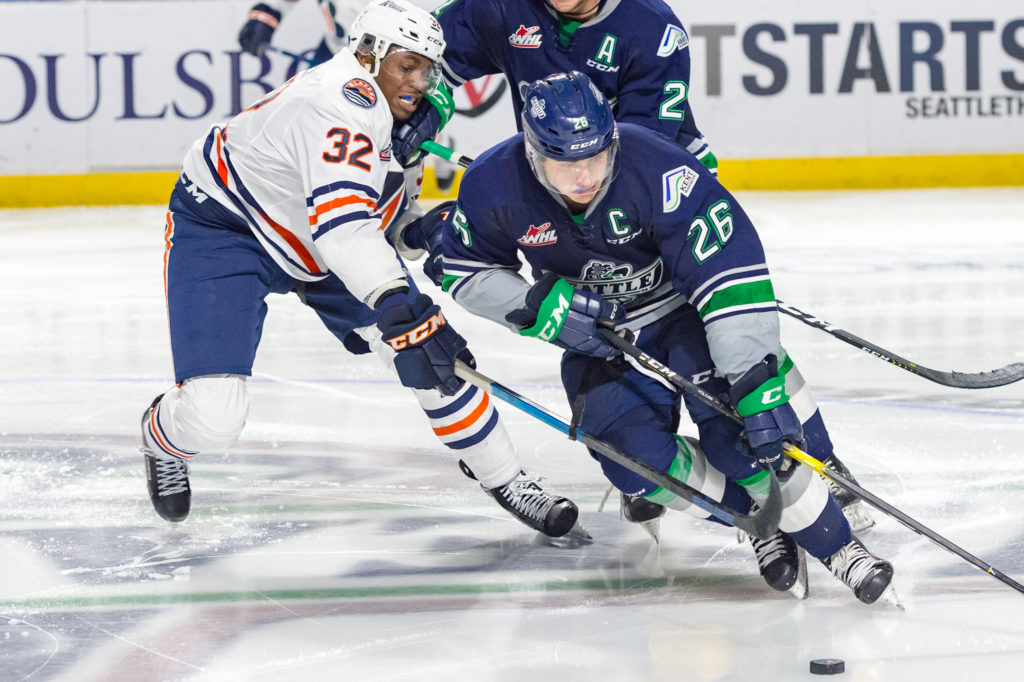 KAMLOOPS, March 1, 2019 — Matthew Wedman had two goals Friday night at the Sandman Centre to help lead the Seattle Thunderbirds to 6-4 win over the Kamloops Blazers.

Seattle is now 25-28-5-2 and holds the second wild card playoff spot in the Western Conference with a five-point lead over the Blazers. The Blazers are 23-30-4-2 and have a game in hand on the T-Birds.

The T-Birds have eight games remaining in the regular season. They T-Birds play the Everett Silvertips on Saturday at 7:05pm at Angel of the Winds Arena in Everett. They host the Tri-City Americans on Sunday at 5:05pm at accesso ShoWare Center.

Seattle struck shorthanded at 8:02 of the first period to take a 1-0 lead. Tyrel Bauer got the puck to Matthew Wedman in center ice. Wedman chipped the puck past a Kamloops defenseman and chased down the puck. Wedman beat Kamloops goalie Dylan Ferguson with a hard wrist shot over the glove for his 34th goal of the season.

Wedman now has a 11-game point streak with 10 goals and eight assists in the last 11 games.

The T-Birds made it 2-0 at 10:32 of the first on an unassisted goal by Noah Philp. Philp carried the puck into the offensive zone on the left wing and then cut through the high slot. Philp came at Ferguson, forcing the goalie down, and then slid to his right. Philp beat Ferguson from a sharp angle as the goalie sprawled to try and make the save.

Philp now has a 10-game point streak with three goals and 10 assists in the last 10 games.

Kamloops cut the T-Birds lead in half at 13:18 of the first on a goal from Kobe Mohr.

Wedman scored at 3:25 of the second period, his second goal of the game, to put the T-Birds in front 3-1. Nolan Volcan got the puck along the right boards, spun and found Wedman skating into the slot. Wedman beat Ferguson over the blocker for his 35th goal of the season.

Andrej Kukuca grabbed the lead back for the T-Birds at 14:04 of the second on the power play. Philp had the puck along the right boards. Philp passed the puck to Jarret Tyszka at the right point. Tyszka crossed the puck to Kukuca in the left circle. Kukuca beat Ferguson over the glove with traffic in front of the goalie for his 24th goal of the season.

Henrik Rybinski put the T-Birds in front for good at 6:46 of the third period. Philp carried the puck up ice on a three-on-two break. Philp crossed the blue line and fed the puck to Kukuca in the right circle. Kukuca took a shot a wrist shot that rebounded off Ferguson to Rybinski to the left of the goal. Rybinksi put back the puck as the goalie tried to slide over and make the save.

Volcan scored an unassisted goal at 10:03 of the third to make it a 6-4 lead. Volcan came down the right wing and put a wrist shot over Ferguson’s glove for his 21st goal of the season.

Kamloops pulled Ferguson for an extra attacker with 2:42 left in the game. The Blazers kept the puck in the offensive zone for a minute and half. The T-Birds blocked several shots and Roddy Ross made several save to keep the Blazers from a fifth goal. The T-Birds were able to clear the puck into the neutral zone with 1:20 left but were not able to change their defenseman. The Blazers pressured for another 30 seconds before Ross made a save.

The Blazers called a timeout with 50 seconds left but were not able to mount the sustained pressure they had earlier with Ferguson on the bench. The horn sounded as the Blazers were brining the puck up the ice.