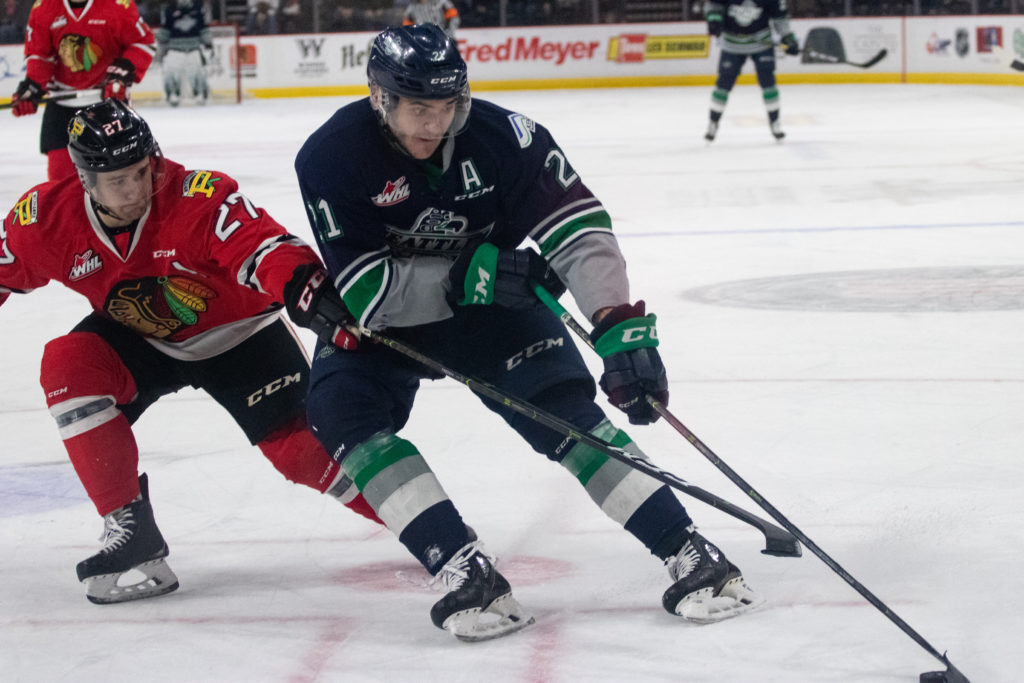 PORTLAND, January 26, 2019 — The Seattle Thunderbirds scored two goals in the last 20 seconds Saturday night against the Portland Winterhawks at Veterans Memorial Arena force overtime and earn a point in the US Division Standings.

Portland’s Seth Jarvis was tripped up cutting to the net from the left circle at 2:19 of overtime and much to the disagreement of the T-Birds coaching staff, was awarded a penalty shot by the referees.

Jarvis scored on the penalty shot to give the Winterhawks a 3-2 win in overtime.

Seattle (17-22-5-1) cut the Winterhawks lead to one goal at 19:40 of the third period with goalie Cole Schwebius on the bench for an extra attacker. Andrej Kukuca passed the puck from the left wall up to Jarret Tyszka at the left point. Tyszka crossed the puck to Simon Kubicek at the right point. Kubicek skated in a beat Portland goalie Joel Hofer with a hard wrist shot.

Schwebius stayed on the bench after the Kubicek goal and the T-Birds won the ensuing faceoff. Tyszka gained the offensive zone and found Matthew Wedman on the left wing. Wedman took a shot from the goal line that Hofer stopped. Henrik Rybinski was on top of the crease and backhanded the puck through his legs to Tyszka in the left circle. Tyszka crossed the puck to Wedman as he had circled the Portland net and was in the right circle. Wedman one-timed the pass from Tyszka and beat Hofer low on the glove side with two seconds left in the game.

Schwebius was very good in net for the T-Birds stopping 38 of 41 shots.

The T-Birds play the Kamloops Blazers on Sunday at 5:05pm at accesso ShoWare Center. The Blazers are one point ahead of the T-Birds for the second wild card playoff spot in the Western Conference.

The Winterhawks went in front 2-0 at 16:41 of the second period on a goal from Robbie Fromm-Delorme. Gilliss had the only assist.

Portland outshot Seattle 41-23 in the game.