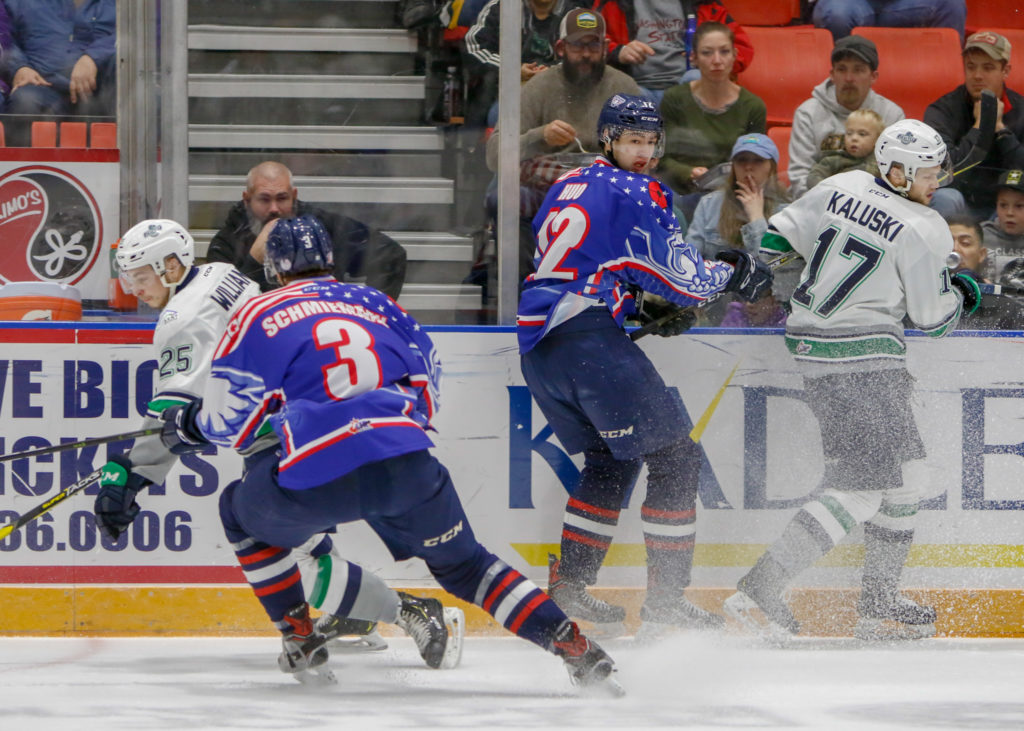 KENT, January 18, 2019 — The Tri-City Americans defeated the Seattle Thunderbirds 3-2 in a shootout Friday night at the Toyota Center.

The T-Birds host the Victoria Royals on Saturday at 6:05pm at accesso ShoWare Center. The game is the annual Fred Meyer Teddy Bear Toss presented by WARM 106.9 FM. After the T-Birds first goal of the game fans will throw teddy bears and stuffed animals on the ice that will be collected by the WARM 106.9 FM Teddy Bear Patrol. The Teddy Bear Patrol gives the teddy bears and stuffed animals to First Responders to give to children in times of crisis.

With the point gained by going to a shootout, the T-Birds moved into a tie for the final playoff spot in the Western Conference with the Prince George Cougars, who were idle Friday night.

Seattle (15-21-4-1) tied the game 1-1 at 13:22 of the second on the power play. Keltie Jeri-Leon took a pass at the right point from Jake Lee. Jeri-Leon sent the puck to Sean Richards on the goal line to the right of the net. Richards centered the puck to Payton Mount in the slot. Mount took a quick shot that Tri-City goalie Beck Warm stopped. Mount got his own rebound and snapped it past Warm.

The T-Birds took a 2-1 lead with 2:19 left in the second. Tyrel Bauer moved the puck up ice from the Seattle zone to Philp in the neutral zone. Philp crossed the puck to Richards on the left wing and skated hard into slot. Richards feathered the puck to Philp coming in alone on Warm. Philp beat Warm with a backhand shot for his 16th goal of the season.

Seattle outshot Tri-City 17-6 in the second period and led 27-12 in shots after two periods.

AuCoin tied the game 2-2 for the Americans at 9:41 of the third period.