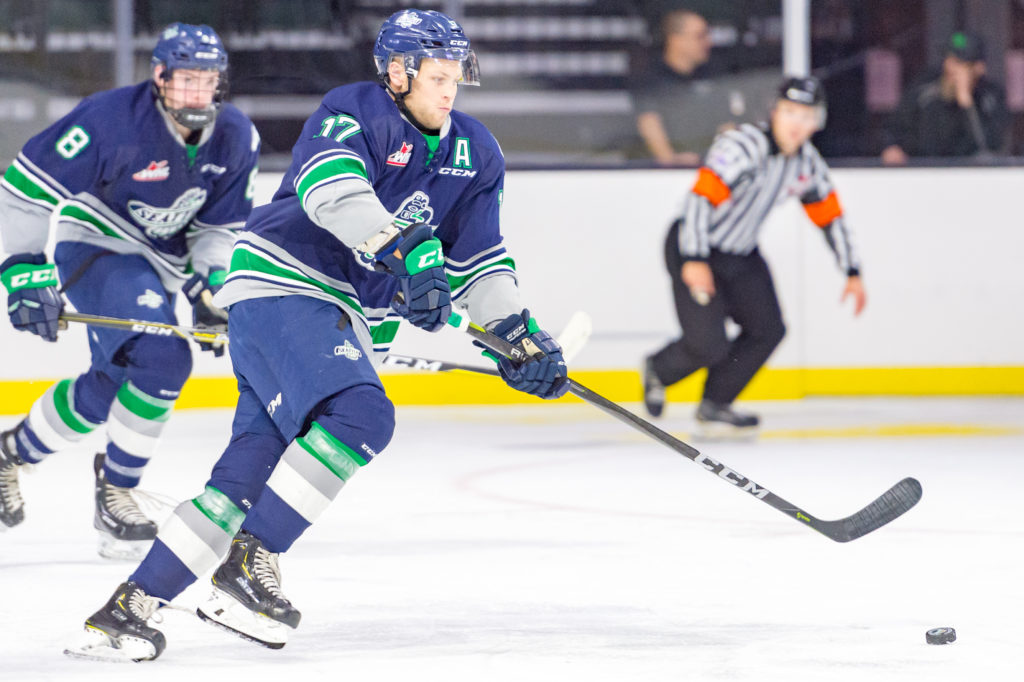 EVERETT, August 30, 2019 — The Seattle Thunderbirds came back from a two-goal deficit Friday afternoon for a 4-2 win over the Vancouver Giants in their first game at the Delta Hotels Preseason Classic at Angel of the Winds Arena in Everett.

Lucas Ciona scored the game-winning goal 1:33 into the third period. Ciona forced a turnover at the Seattle blue line and chased the puck down the left wing. Ciona battled a Giants defenseman for the puck to create a two-on-one with Jaxan Kaluski. Ciona skated into the low slot from left to right and stopped up, as Vancouver goalie Drew Sim slid to his left, exposing a big portion of the net. Ciona deposited the puck into the net for his first goal of the preseason.

Vancouver went in front 2-0 in the first period on a power-play goal from Justin Sourdif at 4:25 and a goal from John Little at 13:32.

Seattle cut the Vancouver lead to one at 15:12 of the second period on a power-play goal from Michael Horon. Tyrel Bauer passed the puck to Horon in the slot. Horon beat Vancouver goalie Drew Sim through the legs. Conner Bruggen-Cate had the second assist.

The T-Birds tied the game 2-2 1:27 after Horon’s goal. Jared Davidson got to a loose puck in the left circle and snapped it past Sim short side for his first of the preseason.

Vancouver pulled Sim with 1:33 left in the game. They had extended time in the Seattle zone but Brecon Wood iced the game with 13 seconds left  when he hit the empty net.

T-Birds single game tickets for 2019-20 regular season are on sale now on online on the T-Birds website and at the accesso ShoWare Center box office.