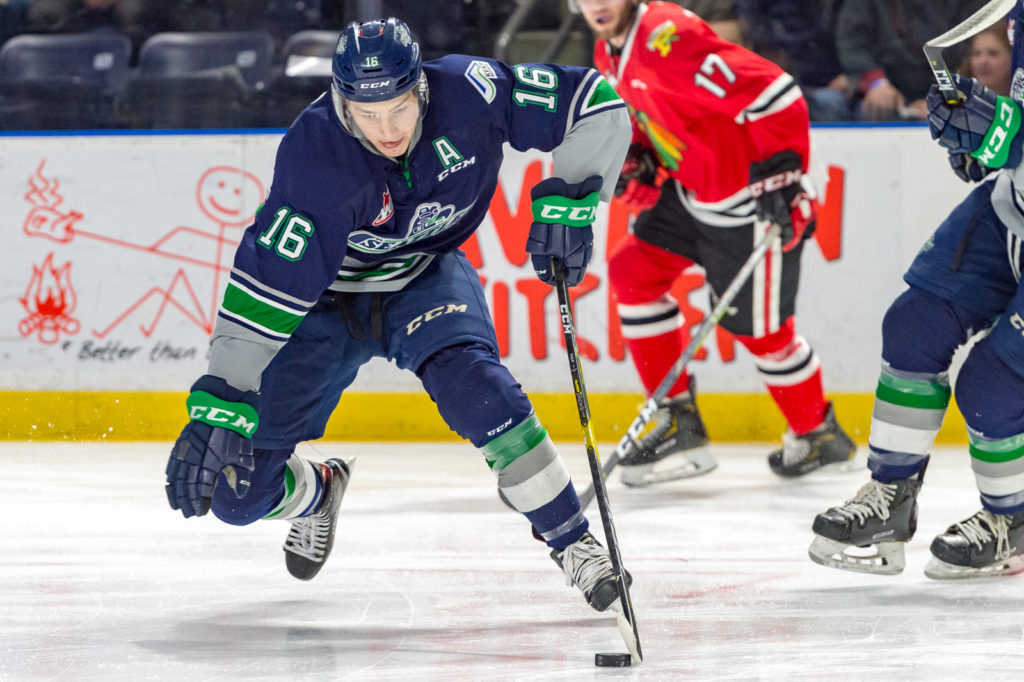 Philp has three points in 5-2 win over Portland

KENT, March 16, 2019 — Noah Philp had two goals and an assist Saturday night in front of 6,206 fans accesso ShoWare Center to lead the Seattle Thunderbirds to a 5-2 win over the Portland Winterhawks in the last regular season home game.

The T-Birds and Winterhawks meet Sunday in Portland at 5pm in the regular season finale for both teams.

The T-Birds will play the Vancouver Giants in the first round of the 2019 WHL Playoffs. The best-of-seven series will start with Game 1 on Friday, March 22, at Vancouver at 7:30pm.

Single game tickets for the first round series against Vancouver will go on sale Monday, March 18, at 10am on the T-Birds website and at the accesso ShoWare Center box office. The box office is open Monday through Friday 10am to 5pm.

Seattle took a 1-0 lead 4:38 into the first period. Philp intercepted a Portland clearing attempt along the left boards at the blue line. Philp sent the puck low to Tyler Carpendale and then got it right back as he skated into the slot. Philp beat Portland goalie Shane Farkas with a wrist shot through the legs for his 25th goal of the season. 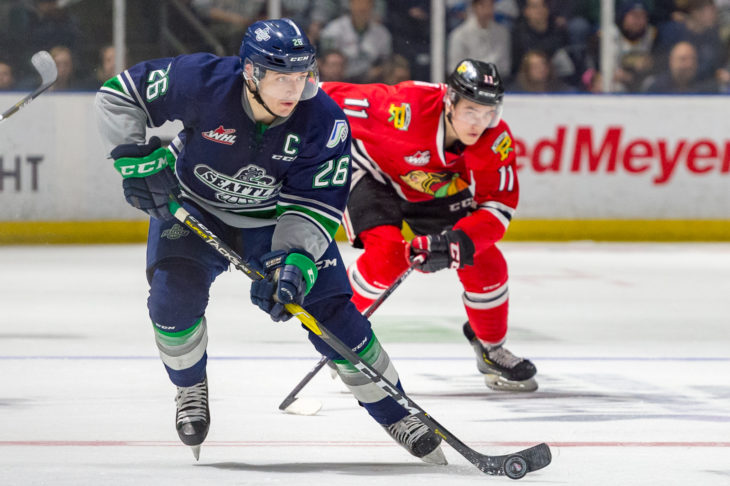 Nolan Volcan extended the lead to 2-0 16 seconds into the second period. Portland played the puck off the right boards trying to get it out of their zone right to Volcan in the left circle. Volcan took a slap shot and beat Farkas over the blocker for his 26th goal of the season.

Matthew Wedman’s 40th goal of the season, 32 seconds into the third period, made it a 3-0 Seattle lead. On the power play Jarret Tyszka crossed the puck to Philp at the right point. Philp took a wrist shot that hit Henrik Rybinski in front and came to Wedman to the right of the net. Wedman slammed the puck over Farkas for the goal.

Portland got on the board when Jared Freadrich scored five-on-three power-play goal at 5:47 of the third.

The Winterhawks cut the T-Birds lead to one goal at 11:09 of the third on a goal from Josh Paterson.

Philp got the two-goal lead back at 15:12 of the third with a breakaway goal. Philp stole the puck along the left boards in the defensive zone. Philp headed up ice with a defenseman closing on him from the right wing. Philp took a wrist shot form the left circle that hit Farkas in the arm and went into the net.

Portland pulled Farkas for an extra attacker with over two minutes left in the game. Owen Williams got the puck along the right boards in the defensive zone and sent it the length of the ice and hit the empty net at 17:05 of the third.