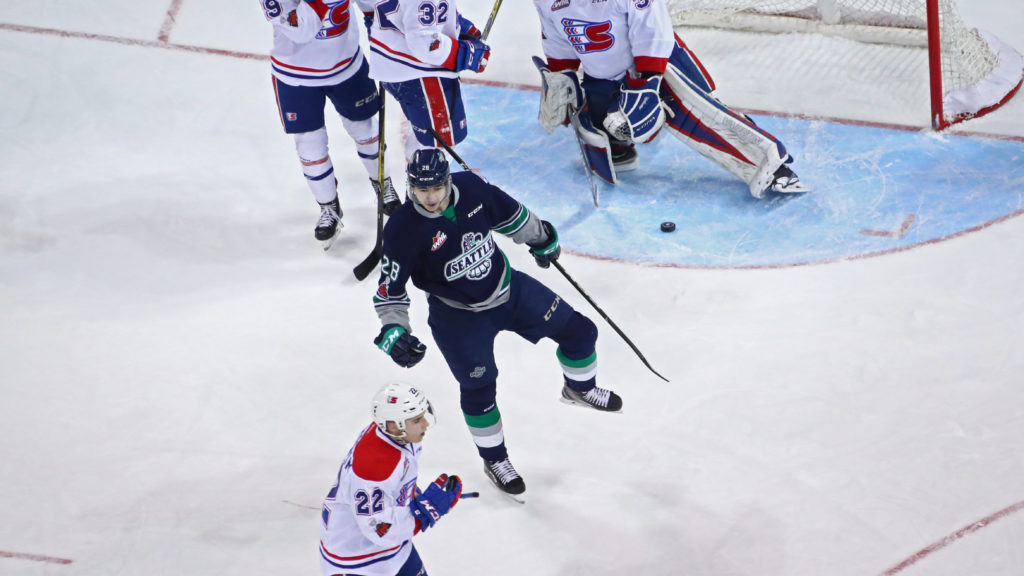 Moilanen has two goals, assist in 6-3 win over Spokane

The T-Birds will play Game 1 of a first round best-of-seven series on Friday, March 23, on the road against an opponent to be determined. Game 2 of this first round series will be Saturday, March 24.

The T-Birds first home playoff game against an opponent to be determined is Tuesday, March 27, at 7:05pm at accesso ShoWare Center. This game will be a Directors Mortgage 2-for-Tuesday game that will feature two-for-one tickets and beers and $2 popcorn, $2 hot dogs, and $2 soda.

Single game tickets for Game 3 of the Seattle Thunderbirds first round playoff series on March 27 will go on sale Thursday, March 15, at 10am. Single game playoff tickets can be purchased on the T-Birds website and at the accesso ShoWare Center box office. The accesso ShoWare Center Box Office is open Monday through Friday 10am to 5pm and Saturday game days at noon. A full first round schedule will be released once the T-Birds know their opponent.

Seattle quickly tied the game 1-1 at 8:59 of the first. Sami Moilanen got control of a loose puck to the right of the Spokane net just above the goal line. Moilanen took a sharp angle shot that beat goalie Dawson Weatherill. The goal was Moilanen’s 20th of the season.

The T-Birds struck 3:20 after their first goal to take a 2-1 lead. Nolan Volcan skated the puck down the left wing. Volcan avoided a Spokane check just inside the blue line. Volcan centered the puck to Moilanen trailing the play. Moilanen beat Weatherill over the glove for his second of the game.

Seattle took a 3-1 lead when Samuel Huo scored 1:19 after Moilanen’s second goal. Dillon Hamaliuk had the puck behind the Spokane net. Hamaliuk centered the puck to Huo all alone between the circle. Huo beat Weatherill over the glove with a hard wrist shot.

The Chiefs cut the T-Birds lead to one with 10 seconds left in the first on a power-play goal by Hudson Elynuik. Kailer Yamamoto and Riley Woods had the assists.

Anderson-Dolan scored on the power play 2:04 into the second period to tie the game 3-3. McIndoe and Yamamoto had the assists.

The T-Birds took the lead back at 3:29 of the second on a good power move by defenseman Jake Lee. Lee picked up the puck as it came of Neuls stick in the neutral zone on the right wing. Lee powered around a Chiefs forward at the blue line and then muscled into the slot. Lee beat Weatherill over the left shoulder with a wrist shot for his fourth goal of the season.

The Chiefs replaced Weatherill with Bailey Brkin after the T-Birds fourth goal. Weatherill had eight saves on 12 shots and his record falls to 26-12-3-3 with the loss.

Seattle got the two-goal lead back at 13:15 of the second. Volcan brought the puck into the Spokane zone on the right wing. Volcan stopped up in the right circle, paused, and then crossed the puck to Matthew Wedman coming down the slot. Wedman took the pass and beat Brkin low for his 17th goal of the season. Moilanen had the second assist.

The T-Birds made it a three-goal lead at 15:20 of the second. Hamaliuk forced a turnover in the left corner of the Spokane zone. Neuls got the loose puck in the left circle and skated at Brkin. Neuls cross the puck through the slot to Zack Andrusiak just inside the right circle. Andrusiak one-timed the pass and beat Brkin high for his 34th goal of the season.

Spokane outshot Seattle 13-11 in the second period and led 29-22 in shots after two periods.