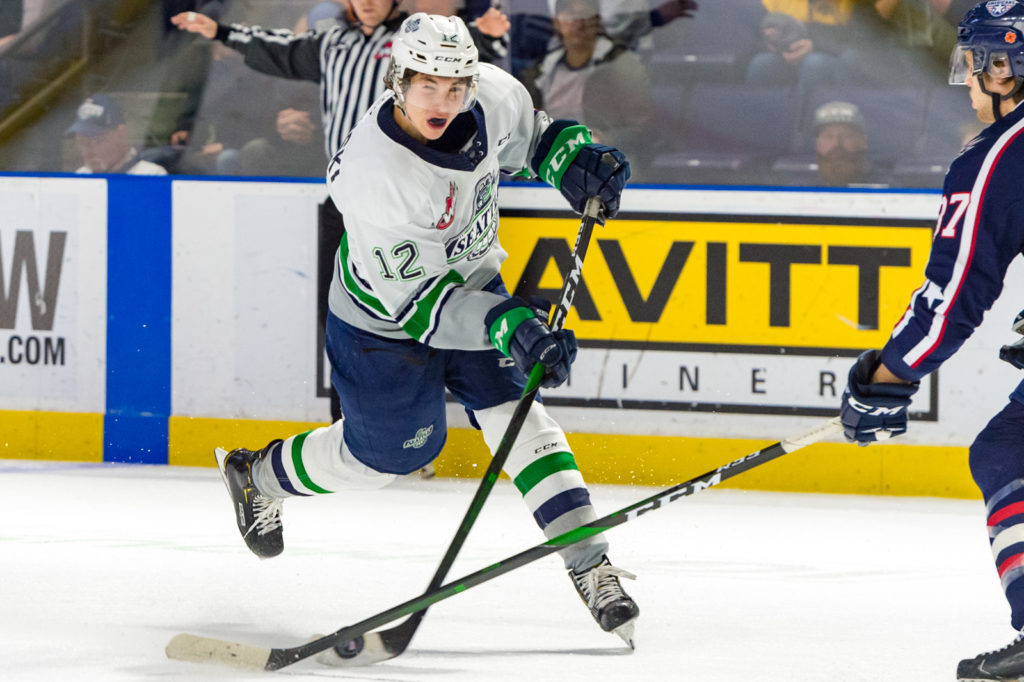 Rempe, Rybinski, Patterson and Ciona score in 4-2 win over Tri-City

Seattle is now 19-22-32 and in the second Wild Card playoff spot in the Western Conference, 10 points ahead of the Americans. They are two points behind the Vancouver Giants for the first Wild Card playoff spot with the Giants having a game in hand. The T-Birds and Giants have not played yet this season. The first of their four games this season is Saturday, February 15, at accesso ShoWare Center.

Seattle took a 1-0 lead at 6:53 of the first period on the power play. Simon Kubicek passed the puck from the mid point to Henrik Rybinski in the left circle. Rybinski found Matthew Rempe to the left of the goal. Rempe used his long reach to put the puck past the left leg of Tri-City goalie Ronin Geraghty for his seventh goal of the season.

Tri-City tied the game 1-1 at 18:20 of the first with a shorthanded goal by Krystof Hrabik.

The T-Birds took a 2-1 lead at 9:15 of the second period. Luke Bateman took a wrist shot from the left point with Henrik Rybinski in the left circle. Rybinski tipped the puck past Geraghty for his 11th goal of the season.

Max Patterson put the T-Birds in front 3-1 at 16:33 of the third period. Tyrel Bauer fired a shot at the net from the right point with Patterson in the low slot. Patterson tipped Bauer’s shot over Geraghty’s glove for his seventh of the season. Payton Mount had the second assist.

The Americans cut the T-Birds lead back to one at 17:31 on a goal from Blake Stevenson.

Geraghty was pulled for an extra attacker with just under two minutes left in the game. Patterson got a loose puck in the neutral zone and drove to the net down the left wing with a defenseman on him. Patterson centered the puck back to Lucas Ciona who had the whole net to shoot and hit it for his third goal of the season with 40 seconds left.