T-Birds Cut Down by Blades 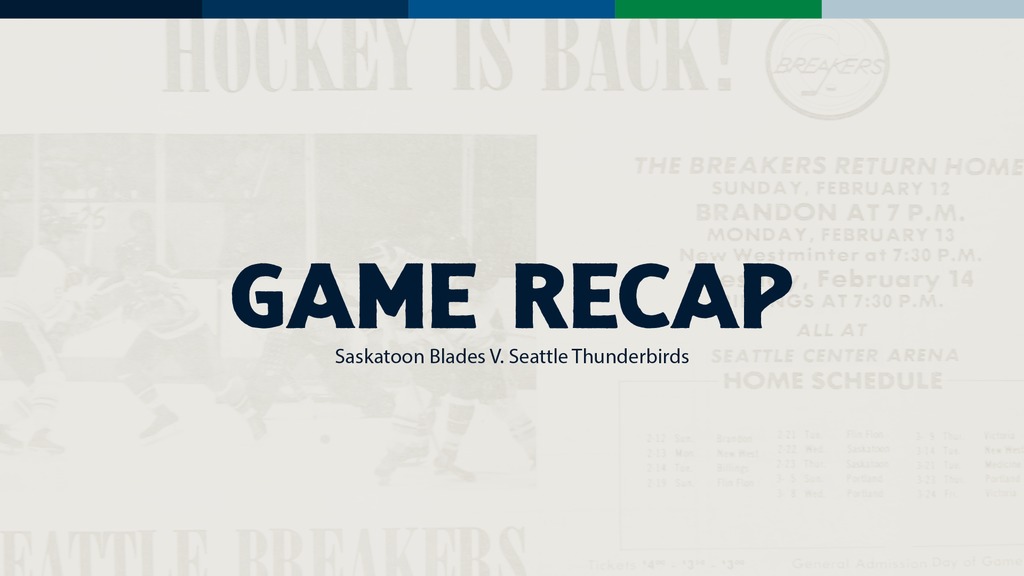 SASKATOON, Sask. –Kevin Korchinski scored in his hometown, but it was not enough as the Seattle Thunderbirds fell to the Saskatoon Blades, 4-2, Saturday at SaskTel Centre. This was the final game of Seattle’s six game road trip through the WHL’s Eastern Division. The Thunderbirds finished the trip 3-3 and that puts their overall record at 30-7-1-1 on the season. The Thunderbirds now return home. Their next game is January 20th versus the Lethbridge Hurricanes at the accesso ShoWare Center.

Thunderbirds head coach Matt O’Dette said the game against the Blades was a microcosm of the road trip. “That’s how these road trips can be,” he commented. “It can be a roller coaster ride with ups and downs, the good, the bad and the ugly.”

Seattle fell behind at 13:53 of the opening period when Trevor Wong capitalized on a Seattle turnover. The goal gave Saskatoon a 1-0 lead going into the first intermission.

The Thunderbirds were much better in the second period, at one point outshooting the Blades 8-0, and getting the equalizer on an unassisted Nico Myatovic goal at 11:12.  But Seattle took two penalties after tying things up and Saskatoon’s Egor Sidorov cashed in on the second one, scoring a power play goal at 18:36 to retake the lead going into the final period.

The opportunistic Blades then scored two more times in the third period off Seattle miscues. Both goals were scored by Sidorov, as he completed the hat trick. A misplay of the puck at the Saskatoon blueline led to a 2-on-1 rush goal at 5:46. A turnover near the Thunderbirds net led to another goal six minutes later.

“That’s kind of their style,” O’Dette said of the Blades. “They kind of clog it up and wait for their opportunities. They executed their game plan tonight.”

The Thunderbirds cut the lead to 4-2 with three minutes left in the game when Korchinski, who hails from Saskatoon, snapped home his fourth of the season off a pass from Brad Lambert. Jared Davidson had the second assist.  Seattle then pulled the goalie late for the extra skater but could get no closer.

O’Dette and the team are excited to get back home and play in front of the home fans for the first time in three weeks, but first they’ll enjoy a little rest. “It started with our (World Junior) guys joining us. It was a super busy schedule for those guys and I’m sure they’re pretty tired right now.”

He said they then had to deal with the excitement of the trade deadline. “A lot of good things happened on the trip, but it’s an emotional time (with players coming and going) and we’re also dealing with injuries, illness and suspensions. Those are things you go through over the course of a season, and we got the whole gamut here on this road trip.”

Beginning with the game versus Lethbridge, four of Seattle’s next five games will be home games to close out the month of January.

The Thunderbirds lost Jordan Gustafson to an injury in the first period, and he did not return. Ironically Gustafson was injured on a play involving his brother Blake, who plays for Saskatoon. There was no update on his status. The team will have him evaluated when they return home.

Kazden Mathies, a second-round pick by Seattle in the 2022 WHL Prospects Draft, took warmups with the Thunderbirds but was a healthy scratch.

Seattle played without Lucas Ciona, who served the second game of his two-game suspension imposed by the league for a charging major incurred Wednesday in Winnipeg.

Thunderbirds Jet Past Everett
37 mins ago