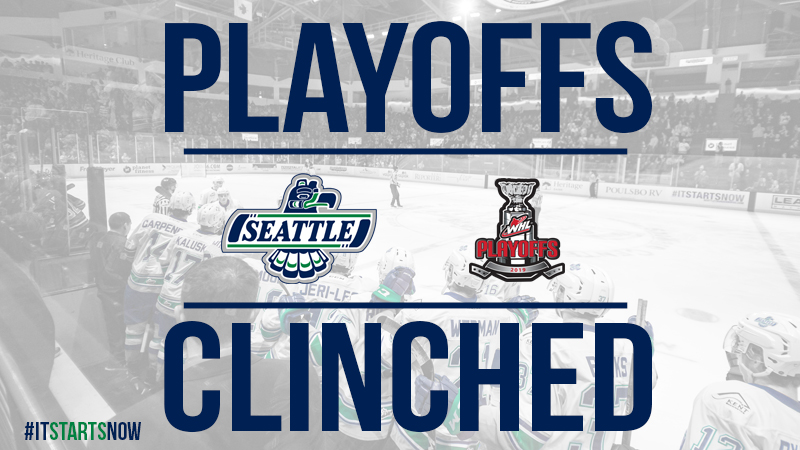 KENNEWICK, March 13, 2019 — Owen Williams scored 1:32 into overtime Wednesday night at the Toyota Center to put the Seattle Thunderbirds into the 2019 WHL Playoffs with a 6-5 win over the Tri-City Americans.

The T-Birds have secured the second wild card playoff spot in the Western Conference. Neither the Kamloops Blazers, who won Wednesday, or the Kelowna Rockets, who lost in overtime Wednesday, can catch the T-Birds in the standings.

The T-Birds know Game 3 of the first round against either Vancouver or Everett will be Tuesday, March 26, at accesso ShoWare Center at 7:05pm. This will be a 2-for-Tuesday game featuring two-for-one tickets and beers and $2 popcorn, $2 hot dogs and $2 soda.

Single game 2019 WHL Playoff Tickets will go on sale Monday, March 18, at 10am at the accesso ShoWare Center box office and online on the T-Birds website. The T-Birds will release a full first round schedule once an opponent has been determined.

In overtime, Tyler Carpendale carried the puck up the right boards and was checked. Noah Philp got the puck off the wall and started a two-on-one break with Williams. Philp skated into the offensive zone on the right wing with Williams on his left. In the low right circle Philp crossed the puck to Williams. Williams snapped the puck past Tri-City goalie Beck Warm, lunging to make the save, for the winning goal. The T-Birds swarmed off the bench and mobbed Williams along the left boards in the offensive zone.

The T-Birds have two games remaining in the regular season. They play the Portland Winterhawks in a home-and-home series. The team are at accesso ShoWare Center on Saturday at 6:05pm and in Portland on Sunday at 5:05pm. Both games will be televised on JOEtv Channel 22/Cable 110. Ian Furness and Andy Johnson will have the call of both games.

Tri-City took a 1-0 lead 31 seconds into the second period on a goal from Nolan Yaremko.

Seattle tied it up 1-1 at 3:53 of the second on Volcan’s 24th goal of the season. Volcan took a pass from Rybinski and skated into the left circle. Volcan beat Warm on the blocker side with a snap shot. Wedman had the second assist.

Wedman made it a 2-1 lead at 13:09 of the second with a power-play goal. Keltie Jeri-Leon passed the puck out of the right corner to Noah Philp at the left point. Philp took a wrist shot with Wedman skating into the low slot. Wedman tipped Philp’s shot past Warm for his 38th goal of the season.

The Americans tied the game 2-2 at 15:02 of the second on a goal from Krystof Hrabik.

Wedman scored a power-play goal 28 seconds into the third period to give the T-Birds a 3-2 lead. Jarret Tyszka had the puck in the right circle and fed Wedman all alone in front of Warm. Wedman made a move and beat Warm low on the right side for his second goal of the game. Rybinski had the second assist.

Seattle extended the lead to 4-2 at 4:59 of the third. Rybinski pressured the Americans on the left boards and the puck popped to Volcan all alone in front of Warm. Volcan beat Warm over the right shoulder for his 25th goal.

Volcan tied the game 5-5 at 16:04 of the third with his third goal of the game. Rybinski stopped an Americans clearing attempt along the left boards and found Volcan in the slot. Volcan got around a Tri-City defenseman and beat Warm through the legs.