T-Birds Can’t Get Past Americans 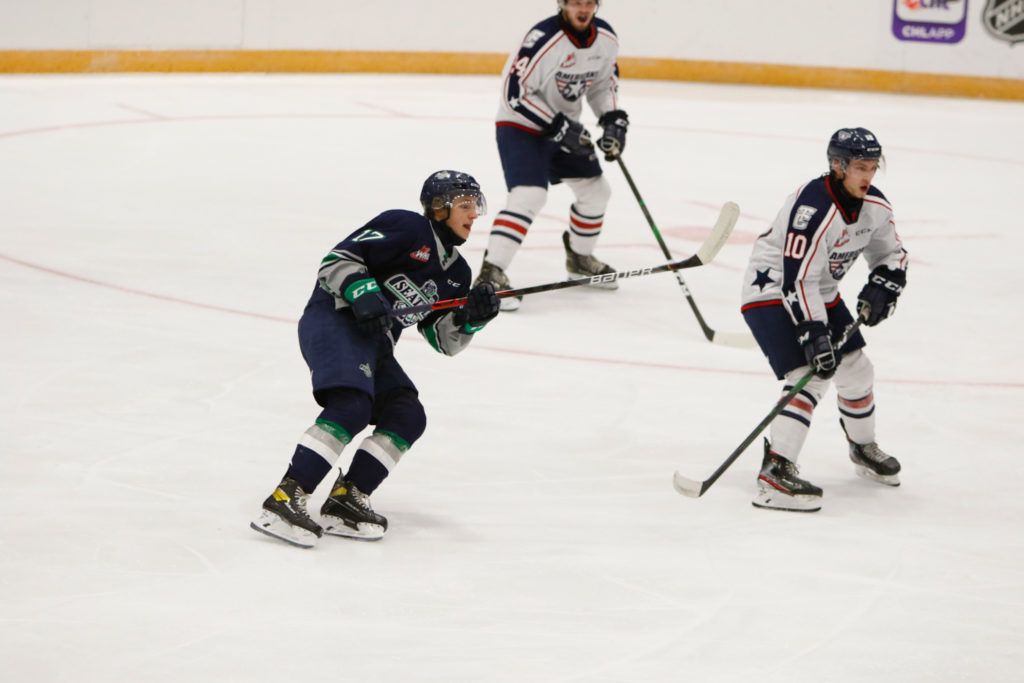 The T-Birds next game is Friday against the Everett Silvertips at 5:05pm at accesso ShoWare Center. This game will be broadcast on JOEtv Channel 22/Cable 110 with Ian Furness on the play-by-play and Andy Eide with the analysis. This is the second of five games in April on JOEtv.

Sam Oremba made his T-Bird debut in the game. Oremba, from Regina, Saskatchewan, was the team’s first selection, seventh overall in the 2020 WHL Draft.

Seattle took a 1-0 lead 1:45 into the game on Jordan Gustafson’s third goal of the season. Gustafson pressured an Americans defenseman in the offensive zone and forced a turnover along the right boards. Gustafson got the puck to Oremba who skated down the boards and from below the goal line backhanded the puck into the slot. Oremba’s pass went off a defenseman’s skate to Gustafson who got a shot on goal. Tri-City goalie Talyn Boyko made the save but Keltie Jeri-Leon got a stick on the puck before Gustafson banged it in.

On his first shift as a T-Bird Sam Oremba has an assist on Jordan Gustafson's third goal of the season which put us in front 1-0. #LetsGoBirds pic.twitter.com/pJh8aTRhfc

The assist was Oremba’s first point in the WHL.

The Americans took a 3-1 lead on a goal from Connor Bouchard 31 seconds into the second period. Then they went in front 4-1 on a goal from Booker Daniel at 14:53.

Seattle (5-4-0-0) cut the Americans lead to two goals at 2:01 of the third period on the power play. Keltie Jeri-Leon beat Boyko over the glove from the right circle. Kevin Korchinski and Gustafson had the assists on Jeri-Leon’s sixth goal of the season.

Seattle pulled goalie Jackson Berry with 3:30 left for an extra attacker. The T-Birds had several chances but Mitchel Brown hit the empty net with 12 seconds left in the game for the Americans fifth goal.