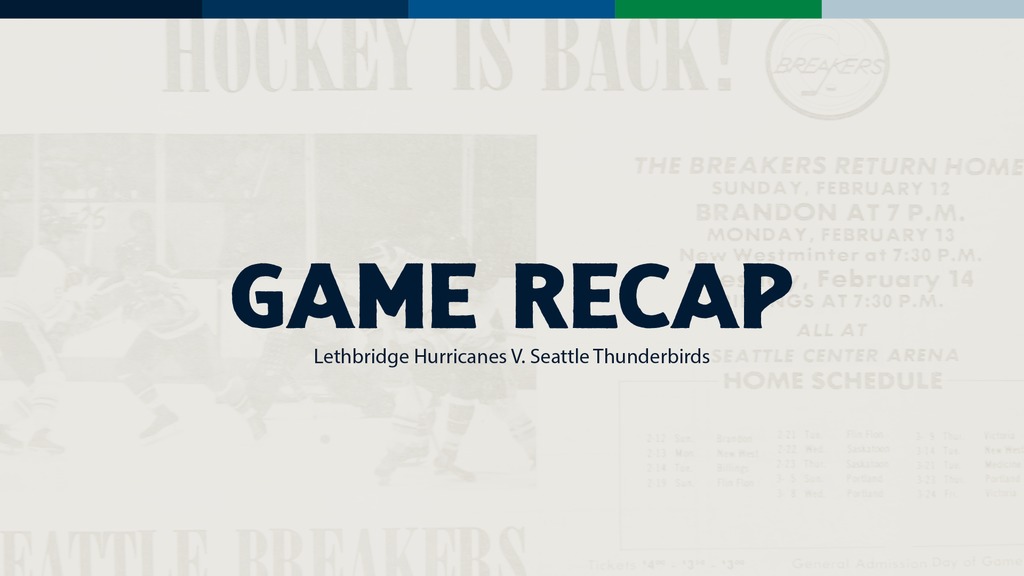 KENT, Wash. –Reid Schaefer scored twice including the game winner on a penalty shot as the Seattle Thunderbirds came back to edge the Lethbridge Hurricanes, 3-2, in overtime Friday at the accesso ShoWare Center. It was Seattle’s first home game since New Year’s Eve and improved their record to 31-7-1-1, including 15-1-1-0 on home ice. The Thunderbirds play at home again Saturday when they host U.S. Division rival Everett. Game time is 6:05 p.m.

Schaefer was awarded the penalty shot after being tripped up on a breakaway at 1:18 of the extra period. “(Gracyn) Sawchyn found me in transition, and I drew a penalty, and I was lucky enough to score on the penalty shot.” Of the shot, he said his plan was to slow down the pace of play. “Just be deceptive, but just a go-to forehand, backhand top shelf.”

Schaefer, who was given the week off to spend time with his family back home in Edmonton after playing for Canada and winning a gold medal at the 2023 IIHF World Championships earlier this month, said he was able to shake off a little rust and get in on the scoring. “We did have a little morning skate and got some of the rust off. I was feeling kind of good after that and tried to carry it into the game. “

Schaefer’s first goal tied the game at 2-2 at 6:58 of the third period.  He gave the credit to his teammates. “Just a set D-zone play. Sawch wins the draw there, then (Luke) Prokop over to (Kevin) Korchinski. Korch made a great pass all the way down to me. I just saw room to shoot, and it hit post and in.”

Thunderbirds head coach Matt O’Dette called the game entertaining for the fans, but not his team’s best effort. “I don’t think we played as well as we could have, at least through the first forty minutes. I think there are things we could have done better.” He did say he liked their third period. “We played more to the way we need to play in the third, but we know we need sixty minutes to win consistently.”

Lethbridge grabbed the early lead with a goal at 7:01 of the first period.  Seattle tied it with a Jared Davidson power play goal at 13:42.  It was Davidson’s team leading 22nd of the season.  The Hurricanes went back up with a power play goal of their own late in the second period before Schaefer brought the Thunderbirds back.

Scott Ratzlaff made 23 saves in net to earn the win. With Thomas Milic away at World Juniors, then getting a week of rest, Ratzlaff has started in goal in fourteen of the Thunderbirds last eighteen games. “It’s a lot about your mind set. Yeah, the body is sore, but I’m just trying to stay focused, keep everything as neutral and calm as possible.” He also credited his teammates for making it easy for him. “The guys have stepped up, blocking shots and doing the best they can to limit shots.”

O’Dette said his goalie may not have faced a lot of rubber but came up with some big saves. “Not a lot in terms of volume but the quality of shots was pretty high at times, and he was there to shut the door.”

Seattle finishes the month of January with three of four games on home ice. In addition to the game versus Everett Saturday, the Thunderbirds host Portland a week later. They welcome Swift current to town on the 31st.  The lone road game in the mix is next Friday in Spokane.

Seattle played without newly acquired Brad Lambert, who is still in Canada while his visa is being processed.

Jordan Gustafson was also absent from the lineup. Gustafson suffered an injury in the first period last Saturday in Saskatoon.  His status is still to be determined but O’Dette said it is a big piece missing from the lineup. “Gussy does a lot for us. He’s a big loss for us and we need guys to raise their games.”

Ashton McNelly returned to the lineup after missing the last three games with an upper body injury.

Seattle’s first round pick in the 2022 WHL Prospects Draft, Braeden Cootes, made his Thunderbirds regular season debut against Lethbridge. The 15-year old Cootes is playing this season with the Sherwood Park Rangers U18 AAA team. He has 21 points (9g,19a) in 28 games.

Thunderbirds Jet Past Everett
5 mins ago