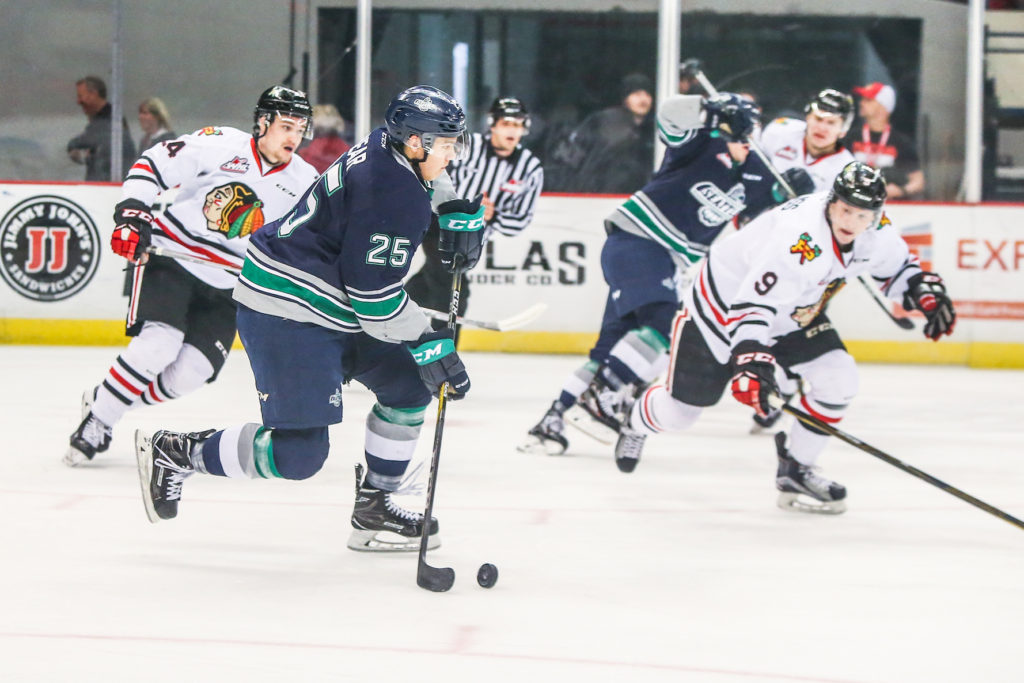 PORTLAND, March 11, 2017 — Alexander True and Ryan Gropp each had a goal and an assist Saturday night at Veterans Memorial Coliseum in Portland to lead the Seattle Thunderbirds to a 6-3 victory over the Portland Winterhawks.

The T-Birds improve their record to 44-19-4-2 and remain in first place in the U.S. Division and Western Conference standings with 94 points. The T-Birds are one point ahead of the second-place Everett Silvertips (41-15-8-3) who beat the Tri-City Americans 5-1 Saturday night in Kennewick. The Silvertips have two games in hand on the T-Birds.

The B.C. Division leading Prince George Cougars (44-21-5-0) defeated the Spokane Chiefs 4-3 Saturday in Spokane and they are one point behind the T-Birds in the Western Conference standings. The T-Birds have one game in hand on the Cougars.

The T-Birds have clinched home-ice advantage in the first round of the playoffs. Games 1 and 2 of the first round against a to be determined opponent will be Friday, March 24, at 7:35pm and Saturday, March 25, at 7:05pm at ShoWare Center.

Single game playoff tickets will go on sale Wednesday, March 15, at 10am at the ShoWare Center box office and online on the T-Birds website.

Seattle outshot Portland 12-11 in a scoreless first period. Rylan Toth started the game for the T-Birds. Matt Berlin replaced Toth after one period.

Seattle went in front 1-0 at 2:38 of the second period on Matthew Wedman’s fifth goal of the season. Zack Andrusiak passed the puck to Turner Ottenbreit at the high point. Ottenbreit took a slap shot that Portland goalie Shane Farkas stopped. The rebound came right to Wedman in front of Farkas. Wedman chipped the puck over Farkas for the opening goal.

The T-Birds struck back at 10:56 of the second on a shorthanded goal by Nolan Volcan. Donovan Neuls worked the puck up the right boards to create a two-on-one with Volcan. Neuls crossed the puck from the low right circle to Volcan in the low slot. Volcan punched the puck past a lunging Farkas for his 14th goal of the season.

Seattle extended the lead to 3-1 on a four-on-three power-play goal from Gropp. Keegan Kolesar had the puck at the right point. Kolesar made a diagonal pass to True in the left circle. True quickly crossed the puck to Gropp to the right of the net. Gropp snapped the puck over Farkas as the goalie tried to make a diving save.

Portland cut the T-Birds lead to one goal at 18:01 of the second on a goal from Shaun Dosanjh. Jake Gricius had the only assist.

Seattle started the third period on the penalty kill when they got called for high-sticking as the second period ended.

True and Gropp teamed up for a shorthanded goal to get the T-Birds two-goal lead back 46 seconds into the third period. Gropp stole the puck in the Seattle zone and broke up ice on a two-on-one with True. Gropp carried the puck into the Portland zone on the right wing. Gropp crossed the puck to True and he beat Farkas high for his second shorthanded goal in as many games.

Keegan Iverson scored a power-play goal at 3:01 of the third to cut the T-Birds lead back to one goal. Jones and McKenzie had the assists.

Sami Moilanen was hauled down on a breakaway at the 14:48 mark of the third and was awarded a penalty shot. Moilanen skated wide left then cut back into the high slot and skated towards Farkas. Moilanen faked a moved right, brought the puck back left and slid it under the goalie for his 21st goal of the season.

The T-Birds iced the game at 18:59 of the third on a five-on-three power-play goal by Ethan Bear. Bear beat Farkas with a slap shot from the left point for his 28th goal of the season. Neuls and Kolesar had the assists.

Berlin finished with 17 saves in two periods and improved his record to 7-2-0-1.

The T-Birds travel to Spokane to play the Chiefs on Wednesday at 7:05pm. They finish out the regular season with back-to-back home games on Saturday, March 18, and Sunday, March 19. They play the Winterhawks at 7:05pm on Saturday and the Vancouver Giants on Sunday at 5:05pm.