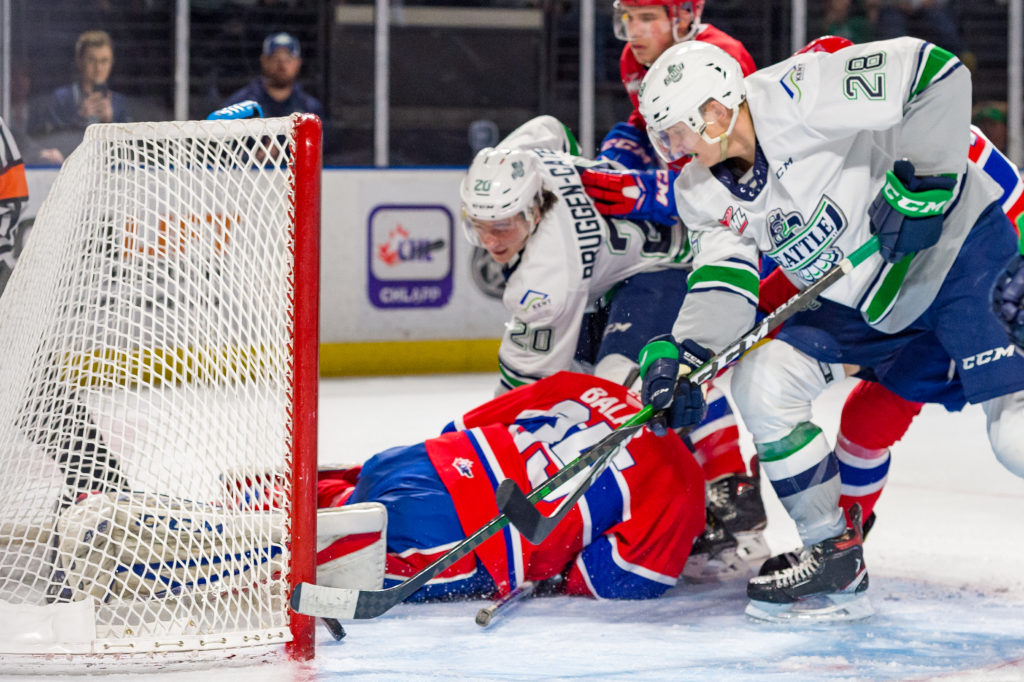 Rybinski, Jeri-Leon and Kukuca each have two goals in 9-5 win over Spokane

KENT, December 27, 2019 — Keltie Jeri-Leon had two goals and three assists and Henrik Rybinski had two goals and two assists Friday night in front of 5,505 fans at accesso ShoWare Center to help lead the Seattle Thunderbirds to a 9-5 win over the Spokane Chiefs.

Seattle jumped out to a 1-0 lead 33 seconds into the game. Bruggen-Cate carried the puck behind the Spokane net left to right and battled through a check. Bruggen-Cate skated into the right circle and took a shot. Andrej Kukuca got a stick on the rebound before the puck squirted to Rybinski at the left post. Rybinski slammed the puck past Spokane goalie Campbell Arnold for his seventh goal of the season.

Rybinski struck for a second time at 1:17 of the first finishing off a pretty passing play. Roulette carried the puck up the right wing and into the offensive zone. Roulette centered the puck to Jeri-Leon who sent it right back. Roulette crossed the puck through the slot to Rybinski in the left circle. Rybinski snapped the puck past Arnold as the goalie lunged to get over.

After Rybinski’s second goal Arnold lay on the ice and was attended to by the Chiefs Athletic Trainer. Arnold left the game and was replaced by Brett Balas.

Seattle made it a 3-0 lead at 6:43 of the first on a goal from Kukuca. Matthew Rempe moved the puck up the left wing wall to Williams who was able to enter the offensive zone moving left to right. Williams stopped in the right circle and took a shot that hit Balas up high. The goalie thought he had the puck but it lay in the crease and Kukuca poked it in.

Conner Roulette scored at 8:34 of the first on the power play to give the T-Birds a 4-0 lead. Williams kept a Spokane clearing attempt in at the left point and fed the puck to Roulette at the right point. Roulette skated into the right circle and beat Balas on the glove side for his 10th goal of the season. 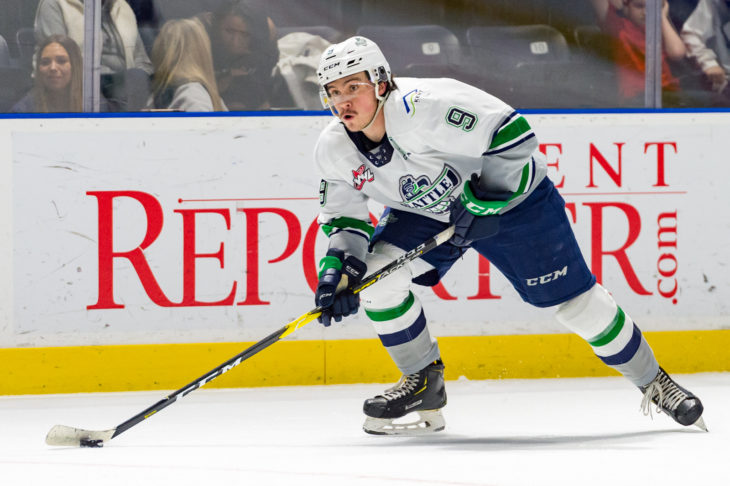 Jeri-Leon scored at 17:59 to make it a 5-0 Seattle lead. Rybinski skated the puck down the left boards and then backhanded the puck Jeri-Leon who skated into the high slot. Jeri-Leon beat Balas with a hard wrist shot on the blocker side. Ryan Gottfried had the second assist.

In the second period Spokane got goals from Luke Toporowski at 6:02 and Bear Hughes at 14:05 to cut the T-Birds lead to three goals.

Max Patterson answered back for the T-Birds, at 16:36 of the second, just after a power play ended to make it a 6-2 lead. Bruggen-Cate passed the puck to Jeri-Leon at the top of the right circle. Jeri-Leon took a shot that rebounded off Balas and lay next to the left post. Patterson banged in loose puck for his first goal as a T-Bird.

Spokane’s Jack Finley scored at 18:09 of the second to get their third goal.

Kukuca got the four-goal lead back at 18:22 of the second. Bruggen-Cate sent the puck around the boards from the left wing to Kukuca at the right wing. Kukuca threw the puck on net and beat Balas through the legs. Zach Ashton had the second assist.

Cordel Larson scored at 19:29 of the third to cut the T-Birds lead to three goals.

Bruggen-Cate scored at 8:38 of the third period to make it an 8-4 Seattle lead. Jeri-Leon put a backhand shot on net from the left circle with Bruggen-Cate charging the net. Bruggen-Cate got a piece of the puck and beat Balas high on the glove side. Rybinski had the second assist.

Spokane make it a three-goal T-Birds lead when Adam Beckman scored at 11:48 of the third.

Jeri-Leon scored an unassisted goal at 13:53 of the third to get Seattle’s ninth goal. Jeri-Leon came off the right boards and cut into the slot with the puck on his backhand. Jeri-Leon got the puck to his forehand and then snapped it past Balas on the glove side.