T-Birds Bear Down on Victoria 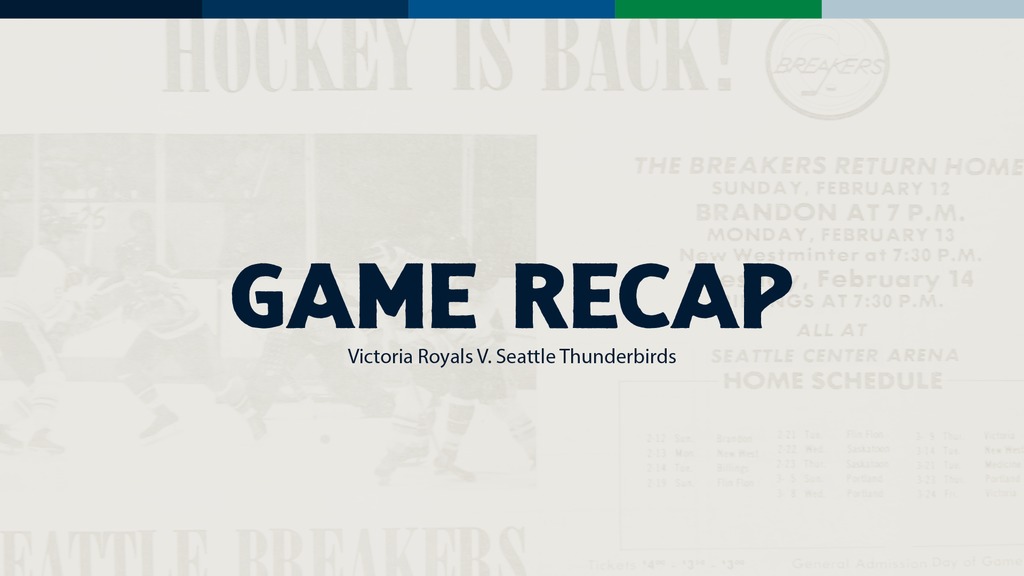 KENT, Wash. –Thomas Milic earned his first shutout of the season as the Seattle Thunderbirds blanked the Victoria Royals, 3-0, Saturday at the accesso ShoWare Center. The Thunderbirds scored all three goals on the power play to improve to 17-4-1-0. Seattle now takes to the road for their next three contests. First up is a trip to Spokane Tuesday to play the Spokane Chiefs.

While Milic faced only 17-shots, many were high quality.  “I think, honestly, some of these lower shot games can be a little bit more difficult, just keeping your mind engaged, your body as well,” he offered. “You go longer stretches with no shots. You just have to stay ready at any moment for a break to happen.”

Milic has stopped 149 of the last 154 shots he’s faced over his last six starts. He’s surrendered just three goals in his last four games. He says his approach really hasn’t changed from earlier in the season. “I always value my preparation, just focusing on that and sometimes you just tap into that zone and I’m gonna hold onto it as long as I can.”

Thunderbirds head coach Matt O’Dette was glad his goaltender was dialed in from the start. “It wasn’t the best first 40 minutes. We turned it up in the third and played the way we want to play with our habits and identity. But they had some good looks early in the game and he was up to the challenge. That’s what you need from your goalie when you don’t have your A game going on at that point in the game.”

On Teddy Bear Toss Night, the T-Birds got the Teddy Bear goal while skating 5-on-3. Jared Davidson one-timed in a pass from Kevin Korchinski from the left faceoff circle at 11:09 of the first period. “It was pretty cool.” he said. “It was pretty easy with the guys screening in front of the net. To see all the teddy bears come out and to see the fans support us like that, it was awesome, especially in my last year here, it was pretty special.”

It was Davidson’s team leading 12th goal of the season. Reid Schaefer had the second assist.

Seattle extended the lead to 2-0 when Gracyn Sawchyn snapped home his 7th of the season at 4:49 of period two with Tij Iginla and Kyle Crnkovic assisting.

The Thunderbirds dominated the third period, outshooting the Royals 21-3 and finished it off with another power play goal, this one from Jordan Gustafson at 12:54. It was Gustafson’s second goal in as many games and ninth of the season. Both Korchinski and Schaefer picked up their second assists of the night on the final goal.

After three on the road, Seattle returns home to the accesso ShoWare Center December 11th when they host the Vancouver Giants.

Jeremy Hanzel was held off the scoresheet and saw his five-game point streak end.

Gracyn Sawchyn has points in three straight games (2g, 1a).

In their last three games Seattle has outshot their opponents 57-18 in the third period.

The Thunderbirds have killed off 30 of their opponent’s last 32 power play opportunities.