T-Birds Battle Past Tips In Overtime 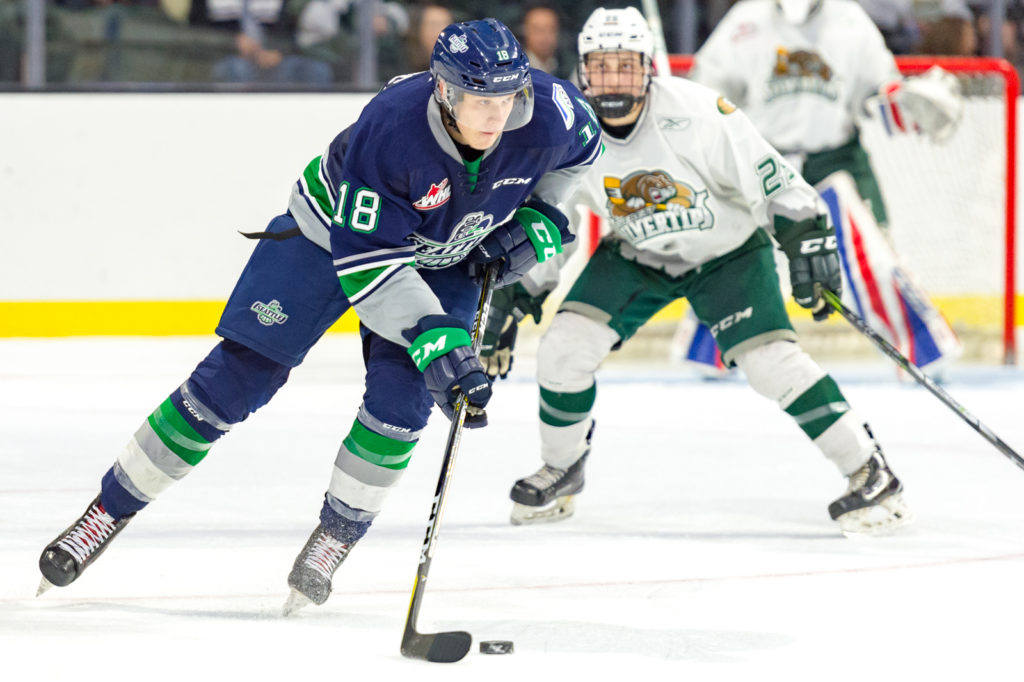 EVERETT, September 1, 2018 — Andrej Kukuca scored at 3:58 of overtime Saturday night at the Delta Hotels Preseason Classic at Angel of the Winds Arena to lead the Seattle Thunderbirds to a 5-4 win over the Everett Silvertips.

The Classic ends for the T-Birds on Sunday, September 2, as they play the Spokane Chiefs at 3pm.

Kukuca also had two assists in the game and now has a goal and four assists in two preseason games.

Prior to the game against the Silvertips, T-Birds General Manager Bil La Forge announced Nick Redding, the team’s Video/Hockey Operations Coordinator, has accepted a head coaching position with a to be announced Junior B team.

“It is a difficult time to lose a position like this, but Nick wanted to pursue the opportunity to coach. We are in the development business at all levels and we will start our search immediately to fill Video/Hockey Operations Coordinator position,” said La Forge.

“Interested candidates for the Video/Hockey Operations Coordinator position can apply by sending a cover letter and resume to us at hr@seattlethunderbirds.com,” continued La Forge.

Everett took a 1-0 lead on a goal by Sean Richards at 1:10 of the first period. Reece Vitelli had the only assist.

The T-Birds tied the game 1-1 2:54 into the second period. Zack Andrusiak won a puck battle in the right corner to Holden Katzalay who moved the puck to Simon Kubicek at the right point. Kubicek skated to his left and took a wrist shot with traffic in front of Everett goalie Blake Lyda. Kubicek’s beat Lyda on the blocker side. The T-Birds announced Kubicek’s signing with the team earlier in the day.

Everett took a 2-1 lead at 8:54 of the second on a goal from Luke Ormsby. Connor Dewar had the only assist.

The Silvertips went in front 3-1 on a five-on-three power-play goal by Jake Christiansen. Dewar and Bryce Kindopp had the assists.

Everett outshot Seattle 11-4 in the second period and led 19-16 in shots after two periods.

The T-Birds started the comeback at 7:15 of the third period. Kubicek took a shot off the rush that his Kukuca and came right to Nolan Volcan to the left of the net. Volcan lifted the puck over Lyda for his first goal of the preseason.

Seattle took a 4-3 lead with two power-play goals in 50 seconds. At 9:46 of the third Graeme Bryks took a pass in the slot from Jared Davidson and wired a shot low past Lyda.

The T-Birds kept the pressure on and Mike MacLean banged in rebound at 10:36 to get his team the lead. Kukuca passed the puck to Andrusiak in the left circle. Andrusiak took a shot that Lyda stopped but MacLean was there to clean up the rebound.

Seattle goalie Liam Hughes had 30 saves on 34 shots and gets his first win of the preseason.