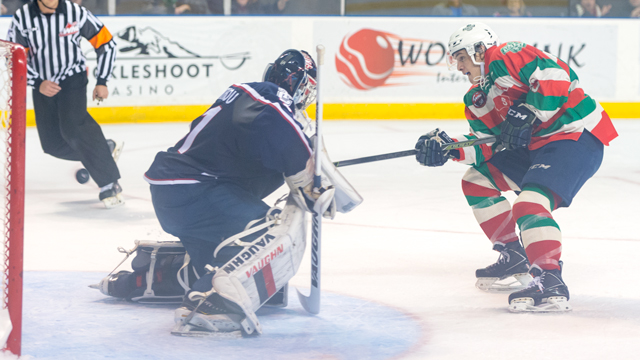 Barzal has two goals in 3-2 win over Tri-City

KENT, December 5, 2015 — The Seattle Thunderbirds celebrated 100 years of hockey in Seattle Saturday with a 3-2 win over the Tri-City Americans in front of a season high 6,192 fans at ShoWare Center.

The T-Birds wore special throwback Seattle Metropolitans jerseys Saturday night. The Stanley Cup and Metropolitans artifacts from the Hockey Hall of Fame were on display at ShoWare Center. Fans were able to have their pictures with the Stanley Cup during the course of the game.

Defenseman Jared Hauf scored the game winning goal with 1:39 left in the third period. Keegan Kolesar came around the Tri-City net right to left and found Hauf with a pass as the defenseman pinched down from the left point. Hauf beat Tri-City goalie Evan Sarthou low for his first goal of the season. Ryan Gropp had the second assist on the goal.

Seattle (17-8-2-0) scored a greasy goal at 6:35 of the first period to take a 1-0 lead. Ethan Bear took a slap shot from inside the blue line with Keegan Kolesar in front of Sarthou. Sarthou stopped Bear’s shot but Kolesar got several whacks at the rebound. The puck popped to Mathew Barzal to the left of the net and he banged the rebound into the net.

Tri-City (11-17-1-0) tied the game 1-1 at 12:56 of the second period on the power play. Parker Bowles banged in his own rebound at the left post. Brian Williams and Parker Wotherspoon had the assists.
The Americans went in front 2-1 on the power play at 16:44 of the second. Michael Rasmussen tipped Williams shot past Seattle goalie Taz Burman. Bowles had the second assist.

Barzal tied the game 2-2 with an unassisted goal with 22 seconds left in the second period. Barzal intercepted an Americans up ice pass in the high slot and came in alone on Sarthou. Barzal deked to his backhand, brought the puck backhand to his forehand and put the puck over Sarthou’s glove into the top right corner of the net.

Tri-City outshot Seattle 19-7 in the second period and led 20-18 in shots after two periods.

The T-Birds were called for an interference penalty with under two minutes left in the game. The Americans pulled Sarthou for a two-man advantage and had several chances. Kolesar cleared the puck off the goal line in one instance after the puck got behind Burman.

The T-Birds play the Spokane Chiefs on Wednesday at 7:05pm then host the Chiefs on Friday at 7:35pm.