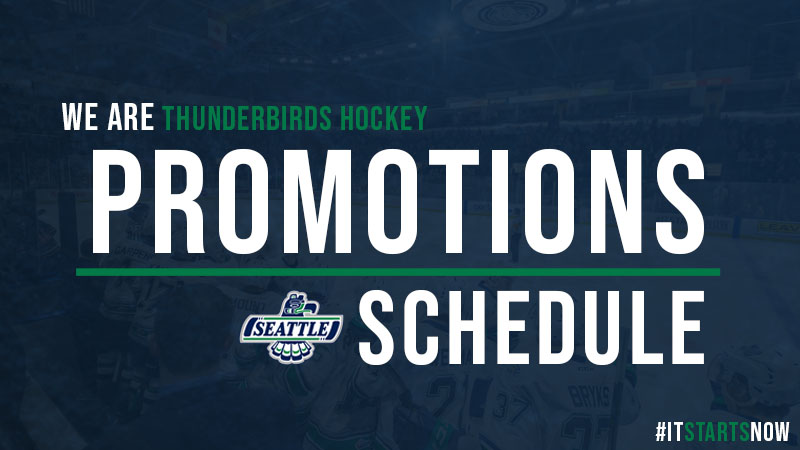 KENT, July 30, 2019 — The Seattle Thunderbirds are excited to reveal our promotional schedule for the 2019-20 season.

The team will host a Season Ticket Pick Up Party on Tuesday, September 3, at 6pm at Dave and Buster’s at the Auburn Outlet Collection. All T-Birds players will be on hand visiting and taking pictures with season ticket holders as they pick up their season tickets.

The T-Birds will kick off the regular season against the Kamloops Blazers on Saturday, September 21, at 6:05pm at the accesso ShoWare Center.

There will be a Party On The Plaza for the first game of the season with food, music and a beer garden. All fans in attendance at the Home Opener will receive a T-Birds Magnetic Schedule courtesy of Beacon Plumbing.

2-For-Tuesday games are back! There are six home games scheduled on a Tuesday this season. For each of these six games, fans can purchase two tickets for the price of one. The concession stands at accesso ShoWare Center will have two-for-one specials on hot dogs, popcorn, soda and beer.

There will be four Pub Nights presented by Dave & Buster’s this season. Fans can purchase 10 tickets, 10 beers and 10 hats for $220 to these games. The Pub Nights will be October 11, November 8, December 13, and January 17. Tickets for Pub Night must be purchased prior to game day.

Our popular Season Ticket Holder Post-Game Autograph session is after the game on Saturday, October 5, against the Victoria Royals. We will celebrate the City of Kent’s contribution to the Apollo Space Program with Lunar Night on Friday, October 18, when we play the Brandon Wheat Kings.

Season Ticket Holder Introduce a Friend to Hockey Night will be Wednesday, November 27 when the T-Birds face the Victoria Royals. Season ticket holders are encouraged to purchase four premium tickets for $30 or 10 premium tickets for $50 to give out to family and friends to come enjoy a T-Birds game. Tickets must be bought in groups of four or 10.

All fans at accesso ShoWare Center on Friday, December 27, when we play the Spokane Chiefs will receive a 2020 T-Birds Team Calendar.

The Fred Meyer Teddy Bear Toss presented by WARM 106.9 FM will be Saturday, January 11 against the Everett Silvertips. All teddy bears and other stuffed animals thrown on the ice after the T-Birds first goal of the game will be collected and distributed by the WARM 106.9 FM Teddy Bear Patrol.

First Responders Night will be Saturday, February 8, when we take on the Everett Silvertips.

Hockey Challenge to benefit the Ronald McDonald House Charities of Western Washington and Alaska (RMHC) is scheduled for Saturday, February 15 against the Vancouver Giants. In 21 years, the Hockey Challenge has raised over $6.4 million for RMHC.

T-Birds single game tickets for the 2019-20 regular season will go on sale August 21 at 10am online on the T-Birds website and at the accesso ShoWare Center box office. 24 Flex Plan ticket holders can start redeeming vouchers on August 14.